Recently published data from Australia’s 2016 census offers a revealing insight into the country’s rapidly evolving religious landscape, with an encouraging outlook for Buddhist communities in the antipodean nation. While overall the data indicated a marked shift toward no religious affiliation among the population over the last 25 years, the number of people identifying as Buddhists continued to grow steadily as the third most common religion in the nation of more than 23 million.

However, some Buddhists believe the percentage of practitioners could in fact be higher as increasing numbers of Australians practice Buddhism without formally identifying with the label. Pairoj Brahma, a former Buddhist monk from Thailand who lives on a farm in northern New South Wales where he teaches meditation, observed that many Australians who practise Buddhism do not necessarily view themselves as religious. 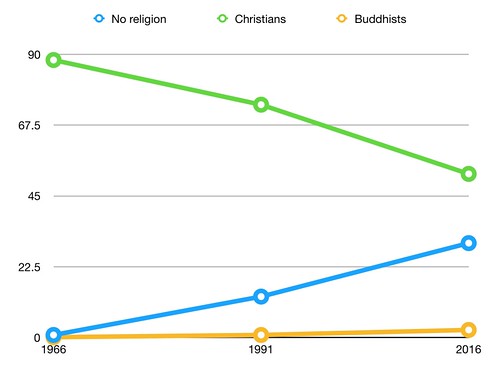 “Buddhism is growing rapidly in Australia because the core Buddhist teaching is somehow suitable to logical thinking and intellectual minds,” Pairoj noted. “You can practice mindful living in everyday life without officially calling yourself a Buddhist. It’s about cause and effect, not things coming from the air. It's about seeing interconnectedness and how things are related to each other.” (ABC News)

Although the first clear example of a Buddhist settlement in Australia dates back to the 1850s, Buddhism first began to gain a widespread foothold in the late 1970s, largely as a result of immigration from Southeast Asia in the wake of the war in Vietnam, but also with the spread to Western countries of Tibetan Buddhism. According to 2016 data from the Australian Bureau of Statistics, Buddhism is now the third most popular religion in Australia behind Christianity and Islam, with some 563,000 Buddhists in the country of 23.4 million. This number has been growing rapidly—doubling between 1996 and 2006. Roughly 75 per cent of Australia’s Buddhists are Buddhist families originating from Asia who have migrated to Australia in recent decades, with the remaining 25 per cent mostly Australian-born Caucasians who identify as Buddhists. Phramaha Weraphong Ritchumnong is a Buddhist monk originally from Thailand. Photo by Samantha Turnbull. From abc.net.au

Australia’s numerous Buddhist communities could be witnessed observing an equally diverse host of festivals and celebrations over the past weekend.

Theravada communities across the country—especially those with ties to Cambodia, Laos, and Thailand—gathered to commemorate the first sermon of Shakyamuni Buddha. Buddhist monk Phramaha Weraphong Ritchumnong led celebrations in a rural community in New South Wales, where Thai Buddhists typically congregates to eat, chant, and meditate. “It’s an important day because it was the foundation of the core concept of the Buddha’s teaching, cause and effect,” the monk explained. (ABC News)

Also in New South Wales, another community of Buddhists held a ceremony to mark the enlightenment of the bodhisattva Guanyin. “Guanyin is the enlightened being who hears the sounds or the cries of the people,” said Nan Tien Temple director Reverend Maio You. “Without Guanyin, Buddhists will not have their cries heard and their sufferings liberated. It’s a significant day for Buddhists.” (ABC News)

Among Australia’s Tibetan community, former monk Yeshi Sangpo, his wife Pema Tso, and their 17-year-old daughter Yangkyi Sangpo joined other Tibetan Buddhists in celebrating the birthday of His Holiness the Dalai Lama. Yangkyi, who fled China with her family after Yeshi escaped from a police detention center, said the celebrations helped Tibetans maintain a connection with their religion and culture. “It’s not about individual prayers and stuff, it’s about how we treat other people, about how you control your mind,” she said. “You be nice to people and be compassionate to people and that’s what we strive to do every single day.” (ABC News) Meditation teacher Pairoj emphasized that the diversity of celebrations and observations demonstrated underlined that Buddhism is not a one-size-fits-all religion. Pairoj, who noted that he generally chose not to participate in Buddhist ceremonies, observed: “Nowadays [many] people seem to follow traditions and cultures and rituals blindly with no investigation and inquiry, which is the opposite of the teachings of the Buddha.” (ABC News)