Each copy of this unique book has been signed by His Holiness the Dalai Lama. From taschen.com

The end result of a digital archiving endeavor spanning more than 10 years, the recently released limited-edition book Murals of Tibet by American journalist and photographer Thomas Laird, and signed by His Holiness the Dalai Lama, offers a unique vision of Tibetan Buddhist art, compiling images of rare, centuries-old murals that represent some of Tibetan culture’s most precious treasures.

Limited to 998 copies, this remarkable two-volume work provides the reader with an opportunity to view in unparalleled detail 130 rare and sacred Buddhist murals dating to as early as 633—some of which have already been lost to the ravages of time and circumstance—from monasteries, temples, and stupas across the Tibetan plateau.

“They are not just art but motivational tools and philosophical statements,” Laird, a Buddhist practitioner, noted of his subjects of his labor. (Los Angeles Times) The two volumes comprise a total of 1,026 pages. The main book, an imposing 28 x 20 inches (71 x 51 centimeters) and 498 pages, is purely pictorial, containing detailed images captured at life-size resolution. Many of the sacred works featured in the book have become fully visible for the first time as can be impossible to catch more than a glimpse of the original paintings, which are often on walls high above the ground within dim, windowless chambers, and frequently obscured by other architectural or ceremonial elements.

The 528-page companion volume includes essays by a number of respected scholars, with Laird giving a contextual commentary of his journey to document the murals, and the renowned American Buddhist academic and author Robert Thurman providing an explanation of Tibetan Buddhist spirituality and history.

“There’s a huge chapter of the world’s heritage that’s unknown and undocumented,” Laird explained. “I was terrified that 1,000 years of these murals was going to be lost for future generations. There’s a thousand years of Tibetan murals that have been very difficult to see. If you go to Tibet, you can’t see the murals. Very often there’s a giant pillar in front of them or the murals begin 10 feet in the air. And when you’re standing beneath them, you’re looking at a distorted view in darkness. But imagine seeing the great murals of Europe for the first time. That’s what we’ve done. It’s an amazing moment—a technological breakthrough.” (The Guardian)

Employing multi-image capture-and-render photographic technique, Laird spent a decade capturing high-resolution, gigapixel images which means that a three-meter mural from the 10th century can be viewed at its original size in intricate detail.

Tragically, some of the images featured in Murals of Tibet can no longer be viewed anywhere else. By way of example, Laird cites the case of a mural at the 15th-century monastery Gongkar Choede that depicted the enlightenment of Shakyamuni Buddha. The crumbling wall on which the mural was painted eventually succumbed to water seepage and collapsed, but not before he was able to make a photographic record of the sacred art.

“I can show you images of it on the wall and then as a pile of rubble on the floor,” Laird related. “It was painted by the greatest artist of the 15th century, Khyentse Chenmo. His hand was like Leonardo’s, conveying the most subtle nuances.” (The Guardian)

After a discussion with Laird, His Holiness the 14th Dalai Lama agreed to personally sign and bless all 998 copies of this work in acknowledgment of the contribution to the preservation of Tibet’s Buddhist heritage. Taschen, the German publishing house responsible for producing the book relates the conversation that took place in India:

His Holiness said: “Yes, I understand the importance of the work you are doing: it is good work, important work. Continue the work. But why sign so many sheets of paper?” “Your Holiness, by signing you are giving your blessing, in the traditional sense. You have never signed every copy of a book. When you take the time to sign each sheet of paper, every copy becomes empowered, more valuable. Many of the murals themselves will vanish in the next few centuries, they are ancient and fragile. Despite the best efforts to conserve them, many will still disappear: some of the murals captured are already gone. But this book will last for generations to come.” To this, the Dalai Lama answered, “Yes, this is important work. I will sign some pages for this work.” (Taschen) 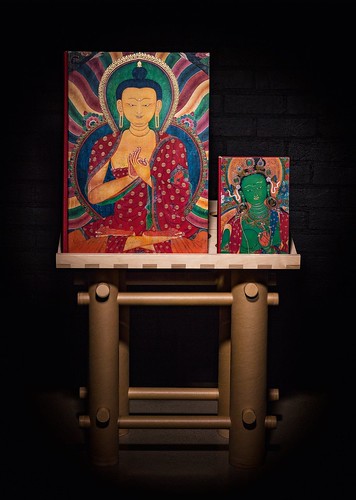 Both volumes of Murals of Tibet on the specially
designed bookstand. From taschen.com

Such a labor of love, of course, comes at a price. In this case the price is a hefty US$12,000, which includes both volumes in a presentation case that also contains a specially designed bookstand.

“As his Holiness the Dalai Lama has himself explained,” the publisher observed. “These murals are not just objects of beauty, but serve as points of reference and guidance for practitioners of Buddhism, yoga, and meditation, as well as for anyone seeking to incorporate mindfulness into their daily life.” (Taschen)