The monks from Tashi Lhunpo in Moscow. Image courtesy of Renata Alyaudinova, savetibet.ru

SOFIA—A delegation of monks from Tashi Lhunpo Monastery, headed by Kachen Geshe Dondup, is visiting Russia between 6 July and 28 August as a part of the Buddhist cultural program titled “Thank you, Russia - 2018.”

The eight monks have an extensive program in which they will visit several Russian cities at the invitation of Telo Tulku Rinpoche—the shadjin (head) lama of Kalmykia and the honorary representative of His Holiness the Dalai Lama to Russia, Mongolia, and the members of the Commonwealth of Independent States—and the Tibetan Culture and Information Center, in Moscow.

The monks started their program in the Russian capital on 6 July, which is also the birthday of the 14th Dalai Lama, with a Cham Dance at the Central House of Cinema. Until 14 July the monks performed several rituals at the Yeshe Khorlo Center* in Moscow, dedicated to the Green Tara, the Medicine Buddha, Namgyal Tsechog, and others. They also constructed a mandala of Green Tara, the female Bodhisattva of protection, and gave a commentary to the Praises to the Twenty-One Taras. The monks from Tashi Lhunpo in Moscow. Image courtesy of Renata Alyaudinova, savetibet.ru

The second stop of the visit was St. Petersburg, where the monks stayed from 17 to 22 July. They constructed a mandala of Amitayus, the Buddha of long life, and performed rituals of the Medicine Buddha, the Green Tara, Yamantaka, Palden Lhamo, and other protectors at the Datsan Gunzechoinei** and the Green Tara University***.

Currently the delegation is in Rostov-on-Don, a port city and the administrative center of the Rostov Oblast in the Southern Federal District of Russia. Between 26 July and 3 August they will construct a mandala of Vajrasattva, the Buddha of purification, and perform a Cham Dance along with several Tantric rituals.

The monks from Tashi Lhunpo will visit two more Russian cities—Astrakhan on the Volga River in southern Russia (5–12 August) and Krasnodar on the Kuban River in the Northwest Caucasus region of European Russia (16–28 August).

Construction of mandala of Green Tara in Moscow (In Russian). From youtube.com

In the Astrakhan region they will participate in the 200th anniversary of the Khosheutovsky Khurul, the oldest Buddhist temple in Europe. It is located on the east bank of the Volga, midway between the Kalmyk city of Tsagan Aman and Astrakhan, the administrative center of the Astrakhan Oblast. The construction of the temple started in 1814 to honor the Kalmyks who participated in the 1812 war against Napoleon and was completed in 1818. During the Soviet period, the temple was partially destroyed; only the main building still stands.

During the celebration at the Khosheutovsky Khurul, the monks from Tashi Lhunpo will construct a mandala of Manjushri, the Bodhisattva of wisdom, in addition to performing a Cham Dance and numerous rituals for long life, healing, protection, wellbeing etc. During the last stop, the delegation will participate in the Tibetan Culture Days in Krasnodar. The eight monks will construct a mandala of Avalokiteshvara, the Bodhisattva of compassion, and perform a Cham Dance and Tantric rituals at the House of Culture for Students and Youth.

Tashi Lhunpo Monastery is one of the six Gelug monasteries and the seat of the Panchen Lama, one of the most important figures in the Gelug tradition after Dalai Lama. The monastery, founded by the first Dalai Lama in 1447, is located at the western side of Shigatse, the second largest city in Tibet. After 1959, it was re-established in South India in the Tibetan Settlement of Bylakuppe, Karnataka State, where, currently, over four hundred monks from Tibet and Himalayan region abide. In spite of the absence of the current 11th Palchen Lama, Gedhun Choekyi Nyima, who was taken by Chinese authorities in 1995, Tashi Lhunpo Monastery continues to provide a high level of education for monks and preserves the Tibetan Buddhism.

* Yeshe Khorlo is the name of a series of Buddhist centers around the world, founded by His Holiness the IX Gangteng Tulku Rinpoche.

** Datsan Gunzechoinei is a large Buddhist temple in Saint Petersburg, built in 1909-1915.

*** Green Tara University is a metacultural space where different traditions flourish, mutually enriching each other. 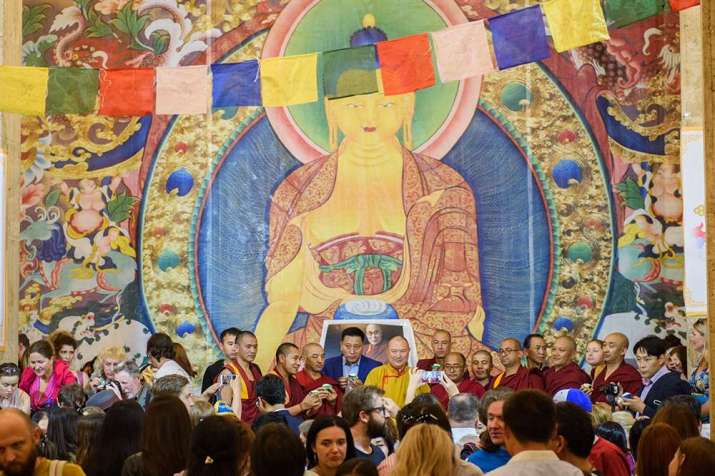