The main building of the LTWA. From Library of Tibetan Works and Archives Facebook

The Library of Tibetan Works and Archives (LTWA) in Dharamsala, one of the most important collections of Tibetan Buddhist manuscripts and other works and artifacts in the world, plans to relocate around 80,000 ancient manuscripts and other rare documents to a new conservation center near the southern Indian city of Bengaluru (formerly Bangalore) to better ensure their preservation for future generations.

Located in the far northern Indian state of Himachal Pradesh, the LTWA was founded in 1970 by His Holiness the Dalai Lama as a repository to preserve, promote, and disseminate Tibetan culture, to conserve Tibetan books and manuscripts, and to act as a reference center for Tibetan studies. The library contains around 100,000 manuscripts, books, and archival documents, more than 600 thangkas, statues, and other Buddhist artifacts, and a collection of some 6,000 photographs. 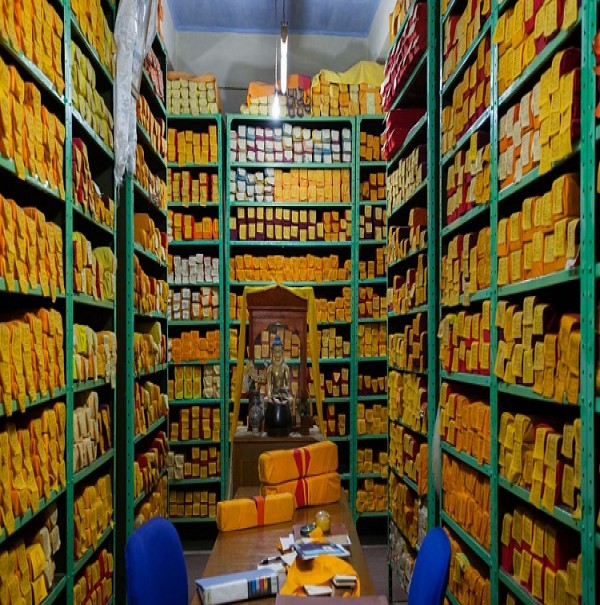 “We’re worried about the safety and security of the invaluable manuscripts housed [at the] LTWA [in] Dharamsala,” said the institute’s director, Geshe Lhakdor. “The present location where these ancient and priceless Buddhist manuscripts are kept falls within the notorious sub-Himalayan zone 5, which is considered the highest-risk belt for earthquakes in the seismic hazard zoning map of India. In the long run, it may be dangerous to keep so many priceless manuscripts in one place.” (The Times of India).

As well as a library, the LTWA also serves as a museum, archive, and an academic institute, regularly hosting cultural and educational courses, seminars, conferences, workshops, and lectures. Parts of the library’s collection are open to the public, while access to other areas is restricted to accredited scholars and researchers. Today, the LTWA is a leading institute specializing in Buddhist and Tibetan studies, attracting scholars, researchers, and students from around the world.

The planned new conservation center, to be known as the Center for Tibetan Studies, will be located on the 1.5-hectare site of the Dalai Lama Institute for Higher Education in southern India, which was officially inaugurated by His Holiness in December 2016.* Geshe Lhakdor said plans for the proposed centre have already been completed. “The project requires huge funding,” he added. “We are looking at philanthropists who can give us funds for preserving these ancient manuscripts—these are priceless collections and we cannot afford to lose them at any cost.” (The Times of India)

The distinguished Buddhist scholar noted that climatic conditions in Dharamsala were also a factor in the decision as the library’s collection is vulnerable to the region’s high levels of humidity. “Dharamsala receives very heavy rainfall which stretches for several months,” he said. “We need a better environment to store and preserve these manuscripts. What better place than Bengaluru, which has technological advantages, too, to preserve these ancient manuscripts.” (The Times of India)

Dharamsala is also home to the Dalai Lama’s official residence, the headquarters of the Central Tibetan Administration (the Tibetan government-in-exile), and a significant population of the Tibetan diaspora. Much of the LTWA’s collection—which includes archival documents related to Tibet’s culture, history, and politics—was carried to India during the 1959 exodus of refugees from Tibet.

“The main aim of the library is to preserve, promote, and foster the culture and identity of Tibet,” said Geshe Lhakdor. “We want to share the collective knowledge and wisdom with the world.” (The Times of India) Exclusive Interview: The 17th Karmapa and the Buddhist Nuns of the Tibetan tradition
Mindrolling Monastery and the World Peace Stupa
“Mind the Gap Between Appearance and Reality”—Barry Kerzin Offers a More Nuanced View of Happiness