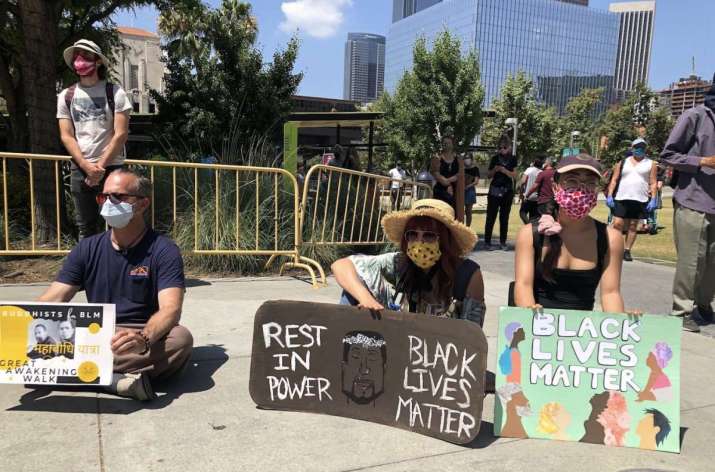 A crowd of Buddhists gathered at the Japanese American National Museum in Little Tokyo, Los Angeles, on Saturday morning in support of demonstrations across the United States protesting police brutality and systemic racism toward the black community. The event was organized by a conglomeration of Buddhist monastics behind the banner “Buddhists for Black Lives Matter.”

By 10am on 13 June, some 200 people had arrived at the museum’s courtyard, many of them carrying placards that expressed Buddhist and anti-racist messages. After listening to an opening prayer, the crowd set out on a meditative walk, which took the participants past the Los Angeles Police Department (LAPD) headquarters and onward to end at Los Angeles City Hall.

The US saw its third weekend of countrywide protests following the murder of George Floyd, an unarmed black man who died at the hands of the Minneapolis police on 25 May. The killing, which was captured on video and caused an widespread public outrage when the footage went viral, has galvanized a global anti-racism movement. Buddhists for Black Lives Matter. Photo by the author

George Floyd is just one of many black Americans to die at the hands of law enforcement personnel. Only a couple of months earlier, on 13 March, Breonna Taylor was fatally shot inside her own apartment by Louisville Metro Police. More recently, Rayshard Brooks was shot by Atlanta police while running away from them. According to the Mapping Police Violence database, more than 1,000 unarmed people died as a result of police brutality from 2013–19, and approximately a third of these individuals were black. (USNews)

Widespread calls to defund and reform the police have already had a nationwide impact. The municipalities of Minneapolis, Washington, DC, Chicago, and Denver, among others, have banned the use of chokeholds, which is what police used on Floyd. Carotid control holds—restraint techniques used to slow blood flow to the brain—have been banned by the Aurora Police Department in Michigan, as well as in Phoenix. Responding to mounting public pressure, prosecutors have upgraded the charges against the four officers involved in the killing of Floyd, and the FBI has launched an investigation into the death of Breonna Taylor.

Buddhists for Black Lives Matter was just one of the many demonstrations that took place in Los Angeles over the weekend. In a moving closing ceremony, participants took turns paying their respects—including lighting incense, bowing, performing prayers—for the many black people who have lost their lives as a result of state-sanctioned racism and violence. Buddhists for Black Lives Matter also published a public statement for the event:

There was a time when a movement reverberated worldwide, calling upon people of all faiths to come together in solidarity for the envisioning of a grand, new nation. We believe we again stand at that precipice today—and, as it was then, we stand beside you now. We unequivocally support the demands set forth by #BLACKLIVESMATTER, that their just pursuit of freedom be truly realized, and that those elected as servants of the people honor their sworn vows. For as it is written, ‘[They] that violate [their] oaths, profane the divinity of faith itself.’ We stand in awe of this precious opportunity that the black community has granted us, that the nation may awaken to the true nature of its suffering, that we may move forward towards a right vision of a more compassionate humanity, one that honors and rectifies the egregious disproportion of suffering currently existing in our country. Only when black lives matter, can all lives matter. For the great awakening happens when the wave realizes it is the ocean. We see you, we love you, hold fast! (DoLa) Buddhists for Black Lives Matter. Photo by the author

Ignorance in the Era of COVID-19: Society’s Failure to Protect Black Communities in the US
Acknowledging Anger and Developing Compassion
“Hyphenated-American”
Buddhistdoor View: Honoring the Lessons of Martin Luther King Jr. for Today’s World
Buddhistdoor View—Learning from Race Issues in the United States