Last Rites and Cremation Performed for Sayadaw U Pandita Followers of Sayadaw U Pandita gather to pay their final respects to a respected teacher. From Panditarama Lumbini International Vipassana Meditation Center Facebook

The funeral rites for revered Burmese monk and influential vipassana meditation teacher Sayadaw U Pandita, who died in a Bangkok hospital on 16 April at the age of 94, were held in Myanmar on Friday. The occasion was attended by followers from across the country and overseas, who gathered to pay their last respects to one of Theravada Buddhism’s most venerated teachers at Panditarama Shwe Taun Gon Sasana Yeiktha, the meditation center he established in Yangon in 1990.

A memorial ceremony was held on Friday morning, presided over by Bhante Dr. Bhaddhanta Kumarabhivamsa, chair of the National Sangha Nayaka Organization. The memorial was followed by a reading of the late teacher’s biography by Bhante Bhaddanta Nandasiri, a senior monk of the Nigrodharama Meditation Centre in Malaysia, and a Dharma talk from Sayadaw Bhaddanta Tilokabhivamsa of Myanmar’s Insein Ywa Ma Centre for Scriptural Studies. In the afternoon, a funeral procession carried Sayadaw U Pandita to the Panditarama Hse Mine Gon Forest Meditation Center in Bago Township, some 50 miles northeast of Yangon, where his remains were cremated.

Widely revered in Myanmar, Sayadaw U Pandita’s followers include President Htin Kyaw and State Counselor Aung San Suu Kyi, with whom he had a longstanding relationship as a spiritual advisor. According to the recollections of Htin Kyaw, which were published in 2015, Sayadaw U Pandita accepted a number of invitations to visit the home of the Nobel laureate, whom he referred to as “daughter,” during her temporary release from house arrest in 2002. During one such visit, the monk asked Suu Kyi to promise “to spare some time to practice Vipassana,” to which she replied: “I will, Sayadaw, when I have time.” Following her release from house arrest in 2010, Suu Kyi took refuge at the Panditarama Shwe Taun Gon Sasana Yeiktha meditation center in Yangon for several days. (The Irrawaddy)

Born on 29 July 1921, Sayadaw U Pandita trained in the Theravada Buddhist tradition from a young age, undergoing full ordination as a monk when he was 20. He was one of the foremost living teachers of vipassana meditation and a successor to the late monk and meditation master Mahasi Sayadaw U Sobhana (1904–82). Sayadaw U Pandita has also been credited as a major influence in the spread of Buddhist teachings in the US. Among the many Western teachers to study under him were Joseph Goldstein and Sharon Salzberg, founders of the Massachusetts-based non-profit Insight Meditation Society. Talks given by Sayadaw U Pandita at the Insight Meditation Society were compiled and published in the book In This Very Life: Liberation Teachings of the Buddha (1995). 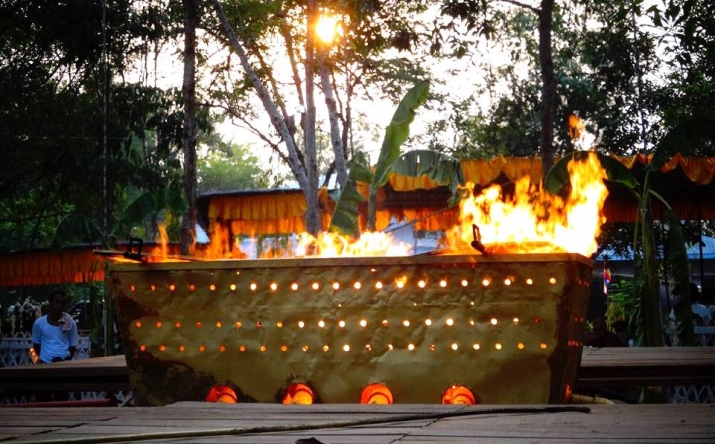 “We brought Sayadaw U Pandita to the Insight Meditation Society in 1984, to lead a three-month silent retreat,” recalled Salzberg in response to the news of his passing. “Joseph and I had never met him before but sat that retreat under his guidance. U Pandita Sayadaw turned out to be quite fierce and demanding. He also absolutely brought out my best effort, no holding back, and revitalized my meditation practice. . . . I can’t even find the words to describe how important he’s been for me.” (Lion’s Roar)

Goldstein also offered touching words in memory of the teacher whose work touched so many people: “Many of us here are saddened to hear of Sayadaw U Pandita’s passing. He was such a powerful influence in all of our lives, urging us on to realize our highest aspirations. His great service to the Dhamma is inestimable. It feels like the passing of an era.” (Lion’s Roar)

American author and Buddhist Alan Clements spent eight nights interviewing U Pandita in February. The series of conversations, titled “Dhamma Advice to the People of Myanmar and Beyond,” is to be included in a forthcoming book.