Led by the Ninth Khamtrul Rinpoche Gyalwa Dokhampa Shedrub Nyima, a major Dharma event came to a close on 26 March in Taipei, after 10 days of elaborate offerings to the wrathful deity (dharmapala) Mahakala, protector of the Dharma. It marked the first time that a complete and unabridged Mahakala Puja has been conducted in Taiwan.

The occasion included preliminary practices, sand mandala creation, and site consecration, followed by eight days of primary practices, including recitations, visualizations, and sacred cham dance, performed by the monks and lamas of Khampagar Monastery in India.

Khamtrul Rinpoche and the monks belong to a lineage of realized yogis originating in Tibet and now residing at Tashi Jong, in the northern Indian state of Himachal Pradesh, where they have preserved their unique and precious traditions of authentic yogic practices.

Lama Dorje, a Taiwanese monk from Khampagar Monastery and the organizer of the event, went to Tashi Jong at the age of 14, living and practicing there for some 17 years, before returning to Taiwan at 32. He gave extensive and detailed explanations and instructions in Mandarin during the event to the public and participants. 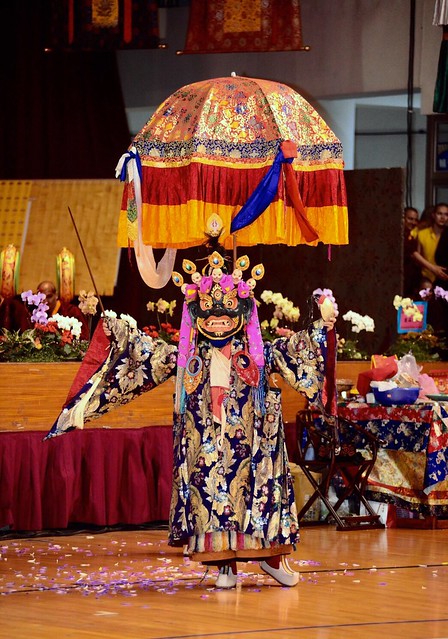 “After I arrived in Tashi Jong at 14, I always went and lingered in the protectors’ shrine because I liked the solemn atmosphere there,” Lama Dorje explained. “In the shrine were more than 20 masks of the protectors of the Drukpa Kagyu lineage. From initiates and lamas who practiced in the shrine every day, I learned that each of them is at least a one-bhumi bodhisattva and they had each vowed before the Buddha or various other lineage masters to protect the lineage, protectors, and patrons. They each have their power, qualities, and their own stories, however, they remain largely unknown to lay Buddhists.”

The Khampagar community of practitioners, who settled in Himachal Pradesh after the Chinese occupation of Tibet, was nearly in full attendance at Taishan Stadium for the traditional tantric ceremony, which was held simultaneously as a spiritual practice for liberation while also being open to the public as a cultural performance.

The puja featured Black Hat dances, chanting, and rich offerings of wine, fruits and tormas, which continued daily from early morning to evening, with only short breaks. The event culminated on Sunday evening with a grand ritual fire, during which the delicately crafted tormas and a large namkha canopy was solemnly carried from the shrine in center of the hall onto a pyre in the courtyard outside, as a symbolic ridding of evils, obscurations, and misfortunes.

The puja was formally concluded with the dissolution of the sand mandala, some of which was used to bless each participant on the forehead. Khamtrul Rinpoche personally blessed all participants individually and distributed colored protective cords.

“Mahakala and the various Dharma protectors led by him are manifestations of various Buddhas dwelling in the Dharmatatu. Out of compassion for the suffering beings in the Six Realms, these enlightened guardians constantly watch over living beings, just as mothers care for their children,” said Lama Dorje, “Their outward appearances are of wrathful deities so that they are able to bring mastery over and tame any malicious beings such as evil spirits and rahkshasas. In response to worldly needs, lineage Dharma protectors are both compassionate as bodhisattvas and swift like worldly spirits and gods. . . . Therefore, it has been my wish to present the Mahakala Puja in Taiwan. However, the wish never came true until this March due to a lack of various conducive causes and conditions.”

“I mentioned to Togden Acho the idea of organizing the Mahakala Puja in Taiwan in November 2018,” Lama Dorje related. "He agreeably and proactively discussed with me the dates and details and even promised to come with Rinpoche along with other three initiates. This really surprised me because, on many occasions, when I invited Acho to officiate over the Long Life Puja of Khamtrul Rinpoche in Taiwan, he always declined, saying that he was too old to travel. Therefore, Togden Acho’s support further strengthened my will to organize the event. It is my hope that we can once again present a perfect puja to benefit more sentient beings.”

Although the puja was held in a civic building, Tibetan sacred dances are considered special occurrences that can transform ordinary places into sublime and sacred spaces, and the dancers themselves become part of a moving mandala. Attired in fine traditional robes and sacred masks, and bearing ritual implements, the dancers orbit and spin in circles (do-ra) like cosmic bodies, alternating graceful and forceful steps—at times appearing almost weightless and at times stamping as if to shake and shatter the ground. The monk performers represent deities and protectors acting on the Earthly plane. The dances are said to emanate energies with the intent to purify, invoke, and praise the Dharma protectors and deities, to help subjugate and expel perceived hostile forces and generate blessing.

Khamtrul Rinpoche, born in 1980 in Bomdila, Arunachal Pradesh, is the head of the original Khampagar Monastery in the traditional Tibetan region of Kham, and oversees more than 200 monasteries and nunneries in eastern Tibet from his present seat in Tashi Jong.

* Khampagar is the main monastery of the Khamtrul Rinpoche lineage; the original monastery in Tibet has been rebuilt and Tashi Jong is where Rinpoche currently resides.

** The Eighth Khamtrul Rinpoche did not escape from Tibet, rather he was advised by the protectors to leave Tibet in 1957 on a pilgrimage to India, which lasted around two years.

The Flourishing of the Palyul Tradition in Bulgaria
Ritualized Landscapes: Performative Iconography
Sky Lanterns and Walubi: My Waisak Day at Borobudur in 2018, Part 1
100-day Mahamudra Transmission at Palpung Sherabling: The Silent and Far Reaching Call of the Ultimate