Aiming to remain relevant to the lives of modern Buddhists in Japan, Kokujo-ji, a Buddhist temple in Japan’s Niigata Prefecture, dedicated its traditional Goma fire ceremony on 7 October to purifying the negativity energy and hatred that is often stirred up during online interactions.

Kokujo-ji, one of the oldest temples in Japan, is associated with the Shingon school of Japanese Buddhism. In the Goma ceremony, fire symbolizes the wisdom of the Buddha and the wooden sticks or tablets used as fuel represent human desires (the root of suffering). In this ritual, which is considered unique to Esoteric Buddhism and is most identified with the Shingon school in Japan, the Buddha burns away the root of suffering for the participants. The central figure invoked in this ritual is usually the protective deity Fudo Myoo (Skt: Acala), one of the Five Wisdom Kings.

The Goma ceremony is believed to have evolved from the Vedic Agnicayana ritual and can be performed for the benefit of individuals, a specific group or community, or for all sentient beings. The consecrated fire is viewed as having a powerful spiritual and psychological cleansing effect. The ritual is performed to destroy negative energies, thoughts, and desires, and can also be conducted for making secular requests and blessings.

Priests at Kokujo-ji have set up a free dedicated webpage where followers can offer up their own online experiences with trolls and flamers. From kokujouji.com

The priests at Kokujo-ji have even set up a free dedicated webpage on the temple’s main website where followers can offer up their own online experiences with trolls and flamers to the purifying spiritual fire. The webpage features a recording of a priest reciting the Maka Hannya Haramita Shingyo (The Great Sutra of Profound Essential Wisdom and Beyond), along with images of figures from Japanese Buddhist history, including the hermit Soto Zen monk Ryokan Taigu (1758–1831), the Buddhist feudal lord Uesugi Kenshin (1530–78), the samurai commander Minamoto no Yoshitsune (1159–89), and the warrior monk Saito Musashibō Benkei (1155–89).

According to the website, all submissions are carefully enscribed on thin wooden strips or tablets known as nadegi, which are fed to the fire by Buddhist priests at the temple with the aim of preventing the negative energy from spreading.

The Shingon lineage is an ancient transmission of esoteric Buddhism that has its origins in India, before spreading outward to China and Japan. Shingon maintains that the expounder of the doctrine was originally the Universal Buddha Vairocana, but the first human to receive the doctrine was the revered Buddhist philospher Nagarjuna (c. 150–c. 250) in India. It is one of the few surviving lineages of Vajrayana Buddhism in East Asia, originally transmitted by traveling monks such as Vajrabodhi (671–741) and Amoghavajra (705–74). Shingon teachings emerged in Japan during the Heian period (794–1185) after the Buddhist monk Kukai (774–835) studiedy Esoteric Buddhist practices in China under Huiguo (746–805), himself a student of the powerful monk Amoghavajra. Kukai returned to Japan as Huiguo’s lineage- and Dharma-successor. 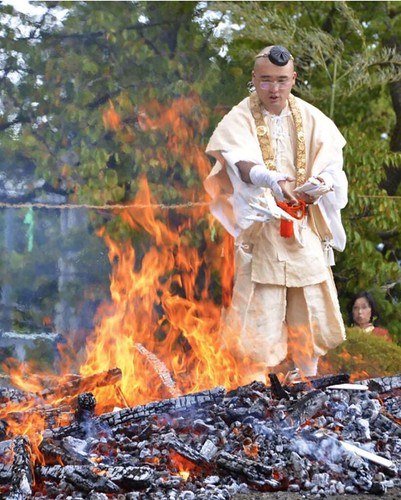 A Kokujo-ji priest conducts the purifying fire ceremony.
From sankei.com

The Propagation of Fudō Iconography in Japan
Kesa: Robes of Patched Perfection
Expressions between Dogma and Silence: A Japanese Take on the Two Truths