TAIPEI—The International Network of Engaged Buddhists (INEB) hosted its 18th general conference in Taiwan from 22–29 November, under the theme “A Conference on Interbeing: Transforming Conflict as Compassion,” aiming to provide platform for broad-based dialogue and cooperation to address the challenges facing engaged Buddhism over the next decade.

INEB co-founder Ajahn Sulak Sivaraksa underscored the fundamental Buddhist elements of bringing about social change at a global level to create the necessary conditions for a more peaceful, equitable society. “The word ‘interbeing’ is very much a Buddhist word coined by Thich Nhat Hanh,” he explained. “In the West, ‘being’ is about being an individual, but if you understand interbeing, we are all connected, which goes right to the fundamental teachings of the Buddha. Not only personally, but social and environmental interbeing—if we understand that, we can solve issues globally.” The eight-day conference, a part of INEB’s 10-year strategic plan to strengthen socially engaged Buddhism worldwide, was divided into three distinct components. The intensive event began with a two-day tour of Buddhist social engagement and outreach projects in Taiwan. Highlights included a symposium on “Buddhist Approaches to Dying and Hospice Care in Taiwan” at the headquarters of the Dharma Drum Mountain movement founded by late Chan Master Sheng-yen (1930–2009), and onsite visits to Buddhist initiatives of the Tzu Chi Foundation—Taipei Tzu Chi General Hospital, which aims to provide holistic, patient-based medical care with an emphasis on acute and critical treatment, and a large-scale recycling project initiated by the foundation and run by elderly community members.

Building on these inspiring examples, the main conference explored the aspirations and challenges for socially engaged Buddhism at a deeper level, with a series of presentations, discussions, and workshops led by members of the global INEB community on activities, projects, and initiatives in communities around the world. Participants and delegates broached such themes as conflict rsolution, compassion and social enagement, social welfare, and social justice. The concluding three-day meditation retreat, led by three female Dharma masters—Ven. Shing Kuang, Ven. Dhammananda, and Ven. Tenzin Dasel—representing the major Buddhist traditions of Mahayana, Theravada, and Vajrayana, provided participants with an opportunity for reflection and self examination on the experiences and learning points shared over the preceding five days. Conference participates attend the symposium on “Buddhist Approaches to Dying and Hospice Care in Taiwan” at Dharma Drum Mountain. Photo by Craig Lewis 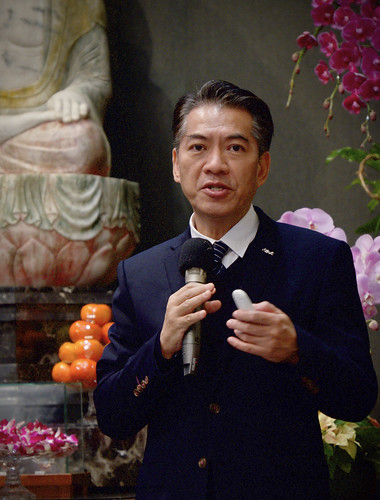 Tzu Chi Foundation spokesman and associate professor of
the Institute of Religion and Culture, Tzu Chi University,
speaks on “The Experience of Social Welfare in Tzu Chi.”
Photo by Craig Lewis * The Buddhist concept of spiritual friendship.