Shoju-in Buddhist temple in the town of Ujitawara, in Japan’s Kyoto Prefecture, was once only known for its Furin Matsuri wind chime festival, which the temple hosts every summer. But a recent architectural addition has created a surge in the temple’s popularity, especially among young Japanese women.

Shoju-in is home to what has become one of Japan’s most popular windows: a heart-shaped aperture that looks out over the temple grounds in the recently built reception hall. Since the feature was introduced on social media as the “the window that invites happiness,” traffic to the temple has more than doubled, with some 20,000 visitors making the journey to see the window last year. The window frames the pink cherry blossoms in the temple garden in spring, the green boughs in summer, and red, orange, and yellow maple leaves in the autumn. As the Sun makes its way across the sky, a heart-shaped beam of sunlight travels across the floor of the reception hall, exuding a sense of romance. But the window has little to do with love; instead it is based on a 1,400-year-old architectural design intended to repel evil spirits.

The window is modeled a after the inome (猪目) symbol, or “boar’s eye.” The inome is believed to have been based on the shape of the eye of a wild boar some 1,400 years ago, and often features as a decorative symbol in Buddhist temples, Shinto shrines, or on swords and spearheads. 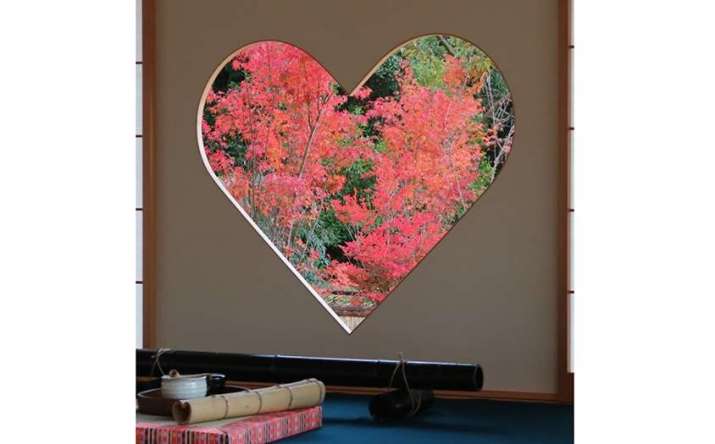 Arrowhead with a cherry blossom and “boar’s eye” design. From worcesterart.org

The boar is traditionally associated with determination and honesty, reflected in the way a boar charges its target without becoming distracted. It was a popular symbol for the samurai class, and over time became associated with warding off misfortune and inviting good fortune.

And the window has indeed invited fortune to Shoju-in temple. The resident monks are surprised but happy with the surging popularity of their home. As Daikan Kunomura, the termple’s deputy priest, relates: “The window gave us an unintended result. I guess divine guidance brought us here.” (The Mainichi) Shoju-in, founded some 800 years ago, is a temple of the Koyasan Shingon school of Japanese Buddhism. It houses a famous statue of the Buddhist protector deity Acala (the “immovable” one), which was crafted by Kaikei (快慶), a Japanese busshi (sculptor of Buddha statues) in the Kamakura period (1185–1333), and is designated as an important cultural property by the Japanese government.

Seven years ago, the temple began hosting the Furin Matsuri wind chime festival, where more than 1,000 wind chimes can be heard and admired. However, according to Kunomura, “far fewer than 10,000 worshipers” would visit the temple each year, probably due to its relatively hard-to-reach location. The Furin Matsuri wind chime festival at Shoju-in. From shoujuin.boo.jp The Furin Matsuri wind chime festival at Shoju-in. From shoujuin.boo.jp

When the reception hall, used for various functions such as tea ceremonies, was added, one of the carpenters suggested adding the inome window in the west-facing wall. After the completion of the hall in 2015, visitors were quick to notice the heart-shaped opening, sharing their pictures on social media and spawning a whole new influx of visitors.

Yet the heart-shaped window is not the only new temple feature attracting attention. Crowning the chamber, the hall’s so-called “flower ceiling” displays 160 decorative paintings of flowers and Japanese landscapes created by some 100 artists and art students, which can be admired when lying on the hall’s traditional tatami mats. The “flower ceiling” in the reception hall. From shoujuin.boo.jp

Expressions between Dogma and Silence: A Japanese Take on the Two Truths
Mindfulness Practice in Japanese Stroll Gardens