Constructed between the 8th and 9th centuries, Borobudur is reputed to be the largest Buddhist temple in the world. From boldtravel.com

Amid reports of escalating violence and a growing humanitarian crisis in Myanmar’s Rakhine State, Indonesian officials have said they will block any attempts to hold rallies at the famed Borobudur Buddhist temple in central Java to protest the persecution of Rohingya Muslims in Myanmar.

Media reports indicate that in the last two weeks almost 125,000 Rohingya Muslims have fled violent clashes between Muslim insurgents—known as the Arakan Rohingya Salvation Army—and military forces in Rakhine, and an estimated 400 people have been killed. Tens of thousands of Rohingya have reportedly sought safety in neighboring Bangladesh, in some cases walking for more than a week in an exodus that so far shows no indication of abating.

According to a Reuters report, Islamic groups in Indonesia have said they plan to stage protests at the ancient Buddhist monument on Friday to demand an end to the persecution of Myanmar’s roughly 1.1 million Rohingya Muslims.

“The action at Borobudur temple will be prohibited,” National Police Chief Tito Karnavian was quoted as saying. “This is not just part of the heritage of Indonesia, but that of the world. There is no need for protests in response to the Rohingya conflict because the Indonesian government is taking action on it already.” (Reuters)

Reputed to be the largest Buddhist temple in the world, Borobudur was built in the 8th and 9th centuries during the Syailendra dynasty that ruled Java for some 500 years until the 10th century. Constructed in three tiers, the temple compsrises a pyramidal base with five concentric square terraces, a cone-shaped trunk with three circular platforms, and a crowning stupa. The monument is decorated with 2,672 relief panels and 504 Buddha statues, while the overall site includes two smaller temples directly to the east of Borobudur—Mendut Temple, which features a depiction of the Buddha accompanied by two bodhisattvas, and the smaller Pawon Temple. Together, the three temples are said to represent three phases in the attainment of nirvana. 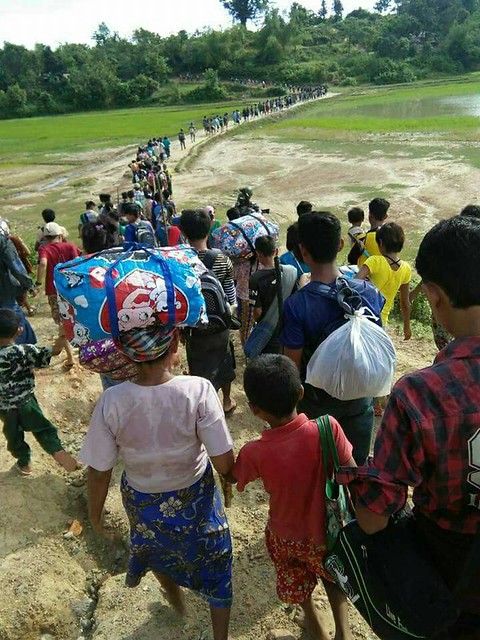 A representative of the islamic groups planning the rally said they wanted to protest peacefully near Borobodur as a demonstration of ethnic and religious tolerance in Indonesia. “The Borobudur is an extraordinary symbol of tolerance,” said Anang Imamuddin. “We want the world to know that it is in a majority Muslim country but it is safe. Buddhist monks are safe here too.” (Reuters)

Recent reports have also carried the first published comments on the growing crisis by Myanmar’s de-facto leader Aung San Suu Kyi, who has insisted that her government is acting to protect everyone in Rakhine State. Suu Kyi reportedly criticized what she described as a “huge iceberg of misinformation” and fake news about the conflict, in reference to photographs posted on social media by Turkey’s deputy prime minister that purported to show dead Rohingya in Myanmar, but in fact were taken elsewhere.

In a telephone conversation with President Tayyip Erdogan of Turkey, Myanmar’s state counsellor said, “We know very well, more than most, what it means to be deprived of human rights and democratic protection. So we make sure that all the people in our country are entitled to protection of their rights as well as, the right to, and not just political but social and humanitarian defense.” (Eleven)

While the majority of people displaced in the Rakhine State unrest are Rohingya Muslims, Hindu and Buddhist villagers in the state are also reported to been been targeted by insurgent attacks and thousands have fled the bloodshed in the hope of finding safety in government-held areas. The crisis has emerged as the biggest challenge facing Nobel Peace Prize laureate Suu Kyi, who condemned a series of raids on 25 August in which insurgents wielding guns, sticks, and homemade explosives attacked 30 police stations and an army base. Rakhine Buddhists and Hindus have also left their homes to flee to safer areas. From bbc.com

Religious tensions between Buddhists and Muslims in Myanmar have simmered for almost half a century. Myanmar’s government classifies Rohingya Muslims as stateless foreign migrants, even though many communities have lived in Myanmar for generations. According to the Washington, DC-based Pew Research Center, Buddhists make up about 80 per cent of Myanmar’s population of some 52 million, and Muslims just 4 per cent, which includes Muslims from other ethnic groups. Rakhine State—where Rohingya Muslims make up the majority in the north and Buddhists the majority in the south—has been the epicenter of the unrest. Outbreaks of anti-Muslim violence in 2012 displaced 140,000 people, predominantly Rohingya. Most Rohingya were resettled in squalid camps where they are subject to severe restrictions, with limited access to education, healthcare, or employment opportunities.

Buddhistdoor View: Reconciling Nationalism and Buddhism
Change from Within: Creating a World of Hope, Love, Compassion, Empathy, and Forgiveness