The memorial is shaped like a book. From india.com

On 13 April, the eve of the 127th anniversary of the birth of the renowned social reformer Dr. B. R. Ambedkar, Indian prime minister Narendra Modi inaugurated the Dr. Ambedkar National Memorial in New Delhi—at the place where Dr. Ambedkar passed away on 6 December 1956. Dr. Ambedkar’s birthday was observed throughout India.

In his keynote speech, Modi observed that he felt proud to be at the inauguration ceremony for the memorial, expressing hope that people would visit the new monument to learn more about the life and ideals of Dr. Ambedkar, making 26 Alipur Road a landmark not only for the people of New Delhi, but for the whole of India. 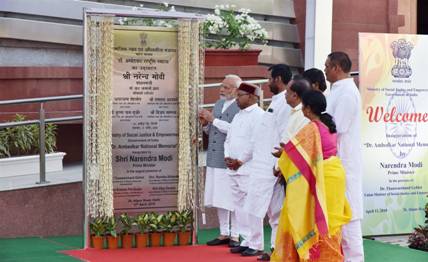 In his speech, Union Minister for Social Justice and Empowerment Shri Thaawarchand Gehlot noted the many new initiatives launched by the Indian government in the past four years as a tribute to Dr. Ambedkar. The projects include sending 100 research students on a study tour to the London School of Economics, and to Columbia University in New York—schools at which Dr. Ambedkar himself studied.

The Dr. Ambedkar National Memorial has been designed to resembe the shape of an open book in reference to the Constitution of India, of which Dr. Ambedkar was the principal architect. The building is completely green, combining modern architecture with Buddhist elements. Modi previously laid the first stone for the memorial’s construction on 21 March 2016.

The new memorial houses a marble statue of the Buddha, a meditation hall, a Bodhi tree, a replica of the Ashoka pillar at Sarnath in Varanasi, musical fountains, façade lighting, and a 3.7-meter bronze statue of Dr. Ambedkar. An installation at the memorial showing Dr. Ambedkar at work. From india.com

The memorial also includes a museum that displays the life and works of Dr. Ambedkar through the application of modern technology. “The museum at the memorial intends to create an immersive experience into the life of Dr. Ambedkar and his contribution to India, through extensive use of static media, dynamic media, audio-visual content, and multimedia technologies,” the Prime Minister’s Office satted in a press release. (Pib.gov.in)

The first floor of the building houses displays related to Dr. Ambedkar’s life and work, while the ground floor features an exhibition gallery illustrating his life at 26 Alipur Road. The memorial also houses virtual reality displays of Dr. Ambedkar adding finishing touches to the Constitution of India.

Born on 14 April 1891 in Mhow, Madhya Pradesh, Dr. “Babasaheb” Ambedkar was the first law minister of independent India. He is also renowned as an economist, a politician, a prolific scholar, and a social reformer. Although he was a Dalit, one of India’s castes of so-called untouchables, he was one of the most educated Indians of his time, holding doctorates from the University of London and Columbia University. He was posthumously awarded the Bharat Ratna, India’s highest civilian award. Having studied Buddhism for much of his life, Ambedkar formally accepted the Three Refuges and Five Precepts, converting to Buddhism shortly before his death, along with 500,000 of his Dalit supporters.

Dalit conversions to Buddhism must not be due to hatred of mainstream Indian society
Buddhistdoor View: The Complexities of Buddhist Conversion and the Indian Dalit Movement
A Light in the Darkness of the Slums of India
Living Dr. Ambedkar’s Vision