A rich trove of Buddhist artifacts has been recovered from Amaravati Stupa in Andhra Pradesh, which has been dated to the rule of the Mauryan emperor Ashoka (r. c. 268–c. 232 BCE). From templeadvisor.com

In an emerging race in India to preserve and resurrect ancient Buddhist heritage sites in order to tap the burgeoning Buddhist tourism market, a curious rivalry has emerged between the Indian states of Andhra Pradesh and Telangana, where progress has been hindered by disputes over the fates of tens of thousands of ancient Buddhist artifacts.

Telangana’s Department of Archaeology & Museums wants Andhra Pradesh to hand over rare artifacts in its possession that were unearthed at ancient Buddhist centers such as Nalgonda and Karimnagar, which are within Telangana. Similarly, the counterpart department in Andhra Pradesh has called for historical objects found within the state but stored at the State Museum in Hyderabad to be surrendered.

The state of Telangana was formed in 2014, when an act of parliament separated Telangana from Andhra Pradesh. Under the act, the city of Hyderabad, located within Telangana, will remain the joint capital of both states until 2024, after which the newly founded city of Amaravathi will become the capital of Andhra Pradesh. The new capital is named after the historic center of Buddhist culture of the same name that flourished from 400 BCE–1100 CE. In the two years since the division of Andhra Pradesh, disputed claims have emerged over Buddhist relics and artifacts—including coins, manuscripts, and sculptures dating back thousands of years. 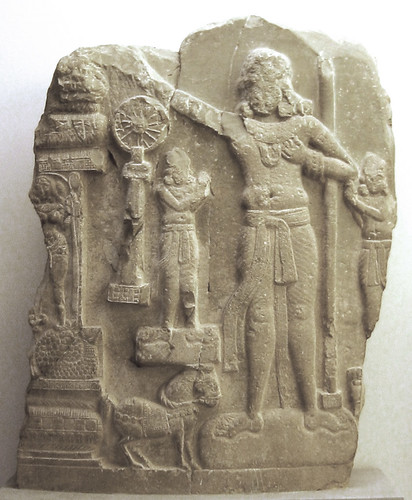 A circa 1st century BCE relief from Amaravathi Village, Andhra
Pradesh. From wikimedia.org

Officials of Telangana’s Department of Archaeology & Museums are due to meet in Hyderabad next week to discuss the issue. “This meeting is very crucial. We want to resolve the issue at the earliest and take control of things which belong to us,” said a senior official from Andhra Pradesh’s Department of Archaeology & Museums. (The New Indian Express)

The governments of both states are banking on thousands of years of Buddhist history to draw investment from East Asia as well as tourists from all over the world by preserving and promoting the history-rich Buddhist heritage sites. Significant Buddhist remains have been discovered in the area that have been dated to the Mauryan empire (322–185 BCE), which encompassed a vast swathe of the South Asian subcontinent, and the Satavahana dynasty (c. 271–30 BCE–220 CE), which mainly comprised the present-day states of Andhra Pradesh, Telangana, and Maharashtra.

The government of Andhra Pradesh is planning to develop two Buddhist Heritage Tourism Circuits covering 21 prominent Buddhist sites in eight districts, while Telangana has announced plans to develop Nagarjunasagar, where archaeological excavations have revealed a number of Buddhist monasteries and inscriptions. A 3rd century Potin coin exacavated from a stupa in Telangana's Nalgonda District. From newindianexpress.com

Buddhism first appeared in what is now Andhra Pradesh early in the religion’s history. Archaeologists have identified historical evidence indicating the presence of the Theravada, Mahayana, and Vajrayana schools of Buddhism in the region—approximately 150 Buddhist monuments and other sites have been identified in the state, including stupas, monasteries, and cave complexes. Although Buddhism declined in Andhra Pradesh during the latter part of the first millennium, there is evidence to suggest that some of these historical sites were active until the 14th century.