India’s government is drawing up a new policy on accepting refugees from “persecuted minorities” in other countries that will include not only Hindus but also minorities of other faiths, such as Buddhists, Jains, and Sikhs, the country’s external affairs minister, Sushma Swaraj, said at a press conference in New Delhi on Sunday.

Swaraj was responding to a media query about attacks on Hindus and other religious minorities in Bangladesh by suspected Islamic militants. Asked whether India would open its doors only to persecuted Hindus, she replied that India’s government was planning a refugee policy that would include all refugees who belong to “persecuted minorities.”

“The attacks are unfortunate,” added Swaraj. “The Bangladesh government is leaving no stone unturned” in investigating these crimes. (Deccan Chronicle) 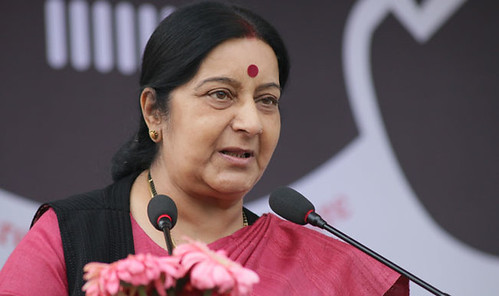 The Bangladeshi government is under mounting pressure to stem the tide of deadly violence, which since January last year has claimed more than 40 lives, most of them Hindus. The Islamic State (IS) group, also known as Daesh, and a Bangladeshi militant group affiliated with al-Qaeda have claimed responsibility for some of the slayings, although Bangladesh’s government denies that either organization has a presence in the country, saying homegrown extremists with political motives are behind the attacks. The authorities in Bangladesh have so far detained nearly 12,000 people in a nationwide crackdown.

Earlier this month, the near-decapitated body of a 70-year-old Hindu priest was found in a field in western Jhenaidah District. Just days earlier, the wife of a senior police officer investigating the attacks and a Christian businessman were also killed. Most of the killings, typically carried out by machete-wielding assailants, have involved religious minorities or secular and liberal activists seen by extremists as offensive to Islam. In May, an elderly Buddhist monk was hacked to death at a small monastery in the southeastern district of Bandarban.

The attacks and death threats in Bangladesh, which have also targeted Shia Muslims, have raised the specter of sectarian violence, once unheard of in the Muslim-majority country. Based on data for 2010, the Washington, DC-based Pew Research Center estimates that 90.4 per cent of Bangladesh’s population of 148.7 million identifies as Muslim, with Hindus representing 8.5 per cent and Buddhists less than 1 per cent, numbering an estimated 920,000.

“I don’t know whether it is IS or some other group decapitating Hindus, but it is quite clear that this persecution is . . . a new phenomenon,” said Kajal Debnath, who heads the Bangladesh Hindu, Buddhist, Christian Unity Council in Dhaka. “Earlier, they would rape Hindu girls or torch our temples and houses, forcing Hindus to abandon their property and migrate to India. It was mostly about grabbing Hindu land and property. But now they are killing ordinary landless, poor Hindus with no social or economic standing, and the message is entirely different. . . . A fresh wave of migration of Hindus out of Bangladesh will begin quietly.” (Asia Times) Refugees from Pakistan who live in India hold the Indian flag as they protest in New Delhi on Pakistan’s Independence Day. From deccanchronicle.com

India has seen large influxes of refugee populations throughout its history, particularly during the Partition of India and Pakistan in 1947. In addition, more than 150,000 Tibetan refugees have fled to India since the abortive 1959 Tibetan Uprising, while an estimated 10 million Bangladeshis arrived during the Liberation War of 1971. Following the 1979 Soviet–Afghan War, more than 60,000 Afghanis fled to India, and some 100,000 people (although estimates vary widely) fled an eruption of militancy in the Kashmiri Valley during the 1990s. There are more than 100,000 Sri Lankan Tamils in India, most of whom migrated during the rise of militancy in Sri Lanka, and the country also hosts a significant population of Rohingya Muslims fleeing persecution in Myanmar.