His Holiness the 17th Karmapa will preside over the 9th North American Kagyu Monlam, scheduled to be held in New York City from 6–10 June, marking the first time the Karmapa has personally led a Kagyu Monlam in North America.

The monlam, which will be held at York College in Queens, has been organized by the Danang Foundation, a New York-based spiritual organization, with a lamp offering to take place at Madison Square Garden in Mahattan. The event is  expected to also be attended by the 12th Gyaltsab Rinpoche, one of the four main seat-holders of the Karma Kagyu school of Vajrayana Buddhism.

The Kagyu Monlam itself will run from 6–9 June, with the Lamp Offering (Marme Monlam) scheduled for 10 June. According to information on the Danang Foundation website, Mahayana Sojong Vows will be given each morning during the Kagyu Monlam, followed by prayers, dedications, Dharma teachings, and empowerments by the presiding master (the Karmapa and/or Gyaltsab Rinpoche). In addition, a special sutra recitation ceremony will be held at the World Trade Center site, where the merit will be dedicated to the victims of the September 11 attacks. The lamp offering prayers will be followed by performances to celebrate the conclusion of the 9th North American Kagyu Monlam.

Festivals are important events for any spiritual community, not least for the Tibetan Buddhist community, which is known for large-scale ceremonies and prayer gatherings. The largest festival of the Karma Kagyu school, the Monlam Chenmo, is held every winter in Bodh Gaya, India—the site of the Buddha’s enlightenment. Over the years, it has grown significantly as thousands of devotees and disciples travel from around the world to hear the teachings and receive empowerments given by the Karmapa, Ogyen Trinley Dorjee, the head of the Karma Kagyu lineage. The Karmapa, was unable to attend this year’s monlam in India in person because he was in the US. 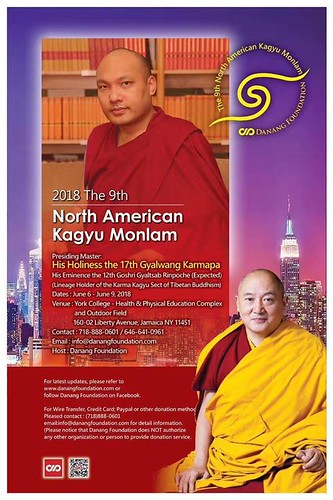 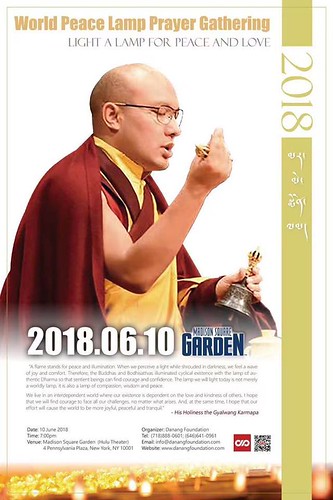 Besides their religious significance, monlams, like all festivals and religious gatherings, are a great bonding and networking exercise. By participating in events, devotees reaffirm their spiritual ties to the community, renew their devotion to their gurus and teachers, and return to their lives refreshed and energized. The main purpose of the annual monlam is to pray for peace and harmony in the world, as evident from the prayer texts as well as the English title of the Monlam Chenmo: “The Kagyu Monlam for World Peace.”

Over the past decade, the Karma Kagyu school has begun to hold “satellite” monlams around the world, from Hong Kong to Macau to Singapore to Europe and the US.

The monlam recently held in the busy Hong Kong commercial district of Tsim Sha Tsui was quite reminiscent of the main ceremony in Bodh Gaya. The same mantras, prayers, and familiar faces made one, for a moment, forget that it was happening in one of the world’s most frenetic business centers and not at Buddhsim’s birthplace, and served as a reminder of the Dharma’s ability to transcend cultural and geographical boundaries.

Ahead of the 9th North American Monlam, the Karmapa will deliver a series of teachings in New York City from 29–31 May, as requested by the Karma Khyenno Foundation, a network of 17 Karma Kagyu spiritual centers and organizations in Hong Kong and Macau, to commemorate the foundation’s 10th anniversary. On 29–30 May, the Karmapa will deliver teachings on “The 37 Practices of a Bodhisattava,” followed by a Vajrasattva Empowerment on 31 May.

Sources told Buddhistdoor Global that nearly 600 people from Hong Kong and Macau are expected to attend the teachings, exemplifying the growing interconnectedness of the cross-border Buddhist network.

Those interested in participating in the Kagyu Monlam in New York can register via the Danang Foundation webiste. There will also be a live webcast of the event in Tibetan, English, Chinese, and Spanish.

Praying for Peace: Reflections on the Kagyu Monlam Chenmo
Exclusive Interview: The 17th Karmapa and the Buddhist Nuns of the Tibetan tradition