His Holiness the 33rd Menri Trizin Passes Away His Holiness Lungtok Tenpai Nyima, the 33rd Menri Trizin, and spiritual leader of the Bön Tibetan spiritual tradition passed away on 14 September, at Menri Monastery (Pal Shenten Menri Labrang) in Dolanji, India. He was 90 years old.

According to a statement released by Menri Monastery, His Holiness was in a meditative state of thukdam* when he passed away. The statement further calls upon followers “to engage in virtuous action and abstain from any non-virtuous deeds.” The public can visit Menri Monastery from 16 September–2 October to view His Holiness and receive blessings. (The Yung Drung Bön)

Prayer services for His Holiness are being held across the world and many Buddhist leaders have conveyed their condolences, among them Dr. Lobsang Sangay, president of the Central Tibetan Administration: “I express my heartfelt condolences over the untimely passing of Menri Rinpoche. Rinpoche spent a lifetime preserving the Bön tradition in exile. I urge Tibetans to pray for his quick rebirth and once again spread the Bön tradition.” (Payul.com) 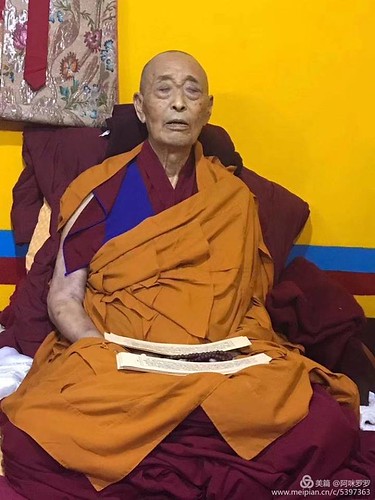 Lungtok Tenpai Nyima was one of the spiritual leaders responsible for the revival of the Bön tradition of Tibetan Buddhism both within and outside of Tibet, in the wake of China’s Cultural Revolution.

Rinpoche was born in 1927, in the village of Kyongtsang, close to the Chinese border, in the north eastern province of Amdo, Tibet. His mother died when he was young, and until his father took him to Phuntsog Dargye Ling Monastery at the age of eight, where his studies of the Bön tradition began, he was raised by an elderly friend of the family.

At 25, Lungtok Tenpai Nyima obtained a geshe degree in Buddhist philosophy under the guidance of Lopon Tenzin Lodro Gyatso. In the following years, he traveled to various Bön monasteries in the Tibetan region and took up the task of printing the Bön Kangyur—a collection of sacred texts from the Bön tradition composed of more than 100 volumes—from traditional woodblocks. In 1959, Rinpoche left Tibet for Nepal on foot, where he joined His Holiness Sherab Tenpa Gyaltsen, the abbot of Yungdrung Ling Monastery, and other Bön lamas at the Bön monastery of Samling in Dolpo, western Nepal. As they fled Tibet, many Bön scriptures were left behind and destroyed during the Cultural Revolution. A small body of work, however, was preserved in remote monasteries and was smuggled into exile by, among others, Lungtok Tenpai Nyima.

In 1969, at the age of 42, Lungtok Tenpai Nyima assumed the office of the 33rd Menri Trizin (Abbot of Menri Monastery). During his time as the Menri Trizin, he re-established Menri Monastery in Dolanji, India—the original Menri Monastery was founded in central Tibet in 1405, but was destroyed during the Cultural Revolution—and made the monastery a center of education for Bön culture and tradition.

According to Bön Buddhists, the Bön tradition originated from an indigenous religion that pre-dated Buddhism in the Tibet. In addition to Shakyamuni Buddha, the tradition venerates the Buddha Tonpa Shenrab Miwoche as the founder of the school. Bön is recognized as the fifth school of Tibetan Buddhism by His Holiness the Dalai Lama.

* According to Tibetan Buddhist Tantric practice, Thukdam is a state of deep meditation, in which the body retains heat, shows no signs of decay, and emits no odors despite being clinically dead.