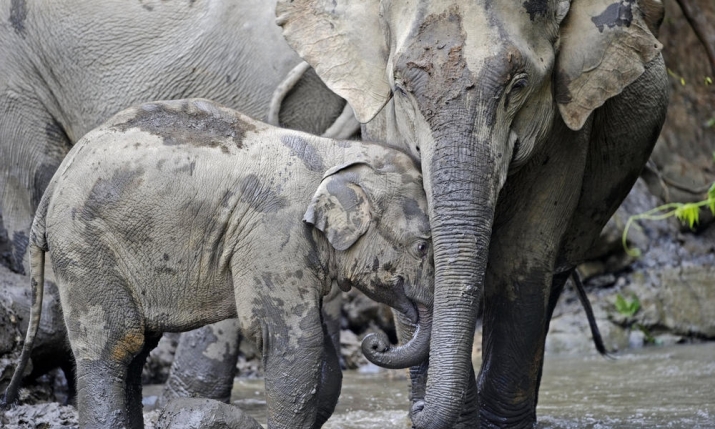 Photo by Christy Williams. From worldwildlife.org

Myanmar’s already endangered wild elephants are now facing a new crisis, the WWF reports. The global conservation organization warns that the country’s diminishing population of elephants are now being poached in record numbers for their body parts, fueled in part by a disturbing rise in demand for elephant skin, which some believe can be used to cure a variety of skin conditions.

According to the government of this Southeast Asian nation, elephant poaching has jumped 10-fold in recent years, and with fewer than 2,000 elephants estimated to be surviving in the wild, conservationists warn that Myanmar’s population of wild elephants could collapse as a result. Elephant poaching in Asia typically targets tusked male elephants, which has previously resulted in a skewed ratio of females in Myanmar’s wild elephant population. But with growth in demand for skin and teeth, mothers and calves are now also being targeted by poachers. So far in 2017, at least 20 elephant corpses have been found stripped of their skin at two sites in Myanmar monitored by the WWF—more than are usually killed in a whole year.

“An astounding 110 elephants have been reported killed since 2003, primarily in the Bago Yoma and Ayeyarwady Delta where armed conflict and a lack of law enforcement make the terrain more accessible to poachers,” said the WWF. “At this rate, wild elephants could vanish from these two key areas of Myanmar in only one or two years.” (WWF) A vendor tries to sell a chunk of dried elephant skin and a tusk at a traditional medicine shop in Myanmar’s Mon State. From eaglenews.ph

“Elephant’s skin can cure skin diseases like eczema,” said the owner of shop in Myanmar specializing in selling animal parts for their perceived medicinal value. “You burn pieces of skin by putting them in a clay pot. Then you get the ash and mix it with coconut oil to apply on the eczema.” (Myanmar Times)

Dried elephant skin is also being turned into beads and sold as lucky charm bracelets, while elephant teeth are ground into a powder that is purported to reduce spots and inflammation. Most of Myanmar’s markets selling elephant products are found at border crossings with China, Laos, and Thailand in eastern Myanmar, where law enforcement is lax, with much of the trade reportedly controlled by a network of criminals armed and funded by powerful “kingpins” in China. According to media reports, more than 400 kilograms of elephant skin was recently seized in southwest China, where it is believed to sell for up to US$57 per kilogram.

“We are witnessing the perfect storm for wild elephants in Myanmar,” said Dr. Christy Williams, country director of WWF-Myanmar. “A sudden increase in the skin trade fad has been driven by growing Asia-based demand, compounded by weak law enforcement and fueled by borderless illegal syndicates operating across Southeast Asia. We urge people and governments across this region to come together to support increased protection for the last remaining wild Asian elephants in Myanmar and beyond.” (WWF) Photo by Christy Williams. From news.mongabay.com

Elephants, however, are just one of dozens of endangered species being trafficked through Myanmar, along with neighboring Thailand a key Southeast Asian hub in the US$20 billion per year global wildlife trade. At a regional level, the ASEAN bloc of Southeast Asian nations has set up a wildlife enforcement network aimed at stemming trafficking, with seizures of products sourced from endangered animals on the rise. Meanwhile, in December last year, China, the world’s largest ivory importer and trader, pledged to ban the trdae in ivory by the end of 2017.

Elephant populations across Asia have been under pressure for decades, facing threats from habitat loss, human-elephant conflict, and poaching. “Asian elephants are already facing tremendous challenges across their range,” said Nilanga Jayasinghe, senior program officer for Asian species at the WWF. “Adding to those is this new trend that we are seeing in Myanmar of herds being indiscriminately poached for their skin. It is extremely alarming. We must act now to protect them!” (WWF)

Halting the Economics of Extinction: How a Spiritual Resurgence in China Could Save the Biosphere
Wildlife on the Brink