Around 500 Buddhist teachers, monastics, practitioners, and guests from around the world were present at the 2016 North American Kagyu Monlam, or “Great Prayer Festival,” held at the Tibetan Buddhist monastery Kagyu Thubten Chöling in Wappingers Falls, New York, from 6–10 July. Overseen by Lama Norlha Rinpoche with blessings from His Holiness the 17th Gyalwang Karmapa, Ogyen Trinley Dorje, the event was led by Yongey Mingyur Rinpoche, who also gave teachings and empowerments.

“Monlam is a Tibetan term that means ‘aspiration,’ ‘goal’ or ‘aim,’ ” said Lama Jamdron, the event spokesperson. The festival’s principal aim was the promotion of world peace. (Poughkeepsie Journal)

“(We) believe that, through prayer, we can have a positive effect on events, and that the more people who are praying together, the stronger the effect,” said Linda Jordan, also known as Lama Chodron. (Poughkeepsie Journal)

This is the first time for the festival, which originated in Tibet and is now held in 16 countries, to be held at the monastery.

Coinciding with the festival was the inauguration of the newly completed Maitreya Center, which features a 32-foot gold statue of the future Buddha, Maitreya. The two-story, 35,000-square-foot building houses Tibetan-style Vajrayana and Chinese-style Mahayana shrine halls as well as a lower-level gathering hall, and is devoted to the practice of loving-kindness. The center honors all Buddhist traditions and provides a space of reflection, meditation, and learning for people of all faiths.

According to the Poughkeepsie Journal, work on the center began around nine years ago, but then ceased until 2011 due to the recession. “When we first started, the building looked so beyond our means on every level,” said Lama Jamdron. “And the fact that it has come together and culminated in this way with everyone coming here from around this [sic] world is special.” Funding for the building came primarily from donations. 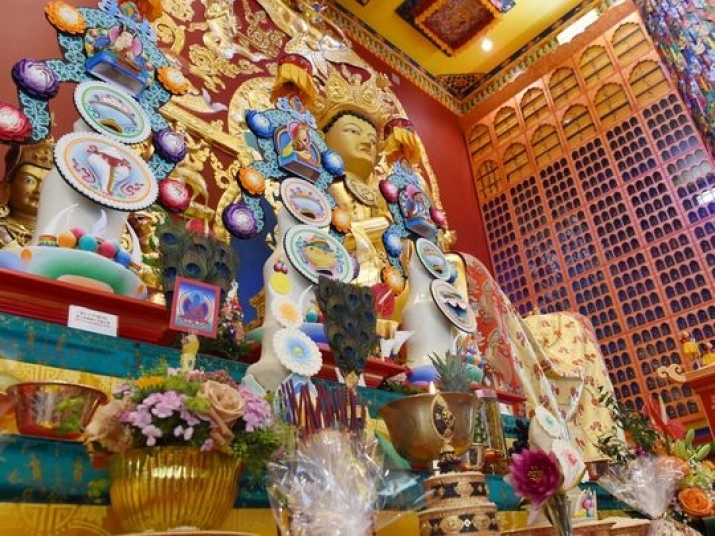 Offerings of flowers, fruit, and sweets to Maitreya at Kagyu Thubten Chöling Monastery. From poughkeepsiejournal.com

On 6 July, Khenpo Karthar Rinpoche, the abbot of Kagyu Thubten Chöling’s sister monastery in Woodstock, gave a teaching in which he emphasized that realization is attained through devotion and prayer. “Realization arises in you when you receive your guru’s blessings. But the only way to receive your guru’s blessings is through your devotion,” Rinpoche said via his translator, Lama Yeshe Gyamtso. “The only way you will develop your devotion is through cultivating it in the act of praying to the guru. Furthermore, this prayer must be sincere, heartfelt and deeply felt. It cannot be simply mouthing the words or conforming to cultural or social convention. Therefore, we say devotion is achieved through the path of prayer.” (Poughkeepsie Journal)

Kagyu Thubten Chöling Monastery and Retreat Center was founded in 1978 by Lama Norlha Rinpoche in the tradition of Kyabje Dorje Chang Kalu Rinpoche. Lama Norlha Rinpoche is a world-renowned meditation master in the Kagyu lineage, and guides the Dharma community in person. The center has hosted two visits from HH the Dalai Lama and received blessings from the 16th as well as the 17th Karmapa. A three-year retreat program was established in 1982.

Yongey Mingyur Rinpoche is a master in both the Nyingma and Karma Kagyu traditions. The author of two bestselling books, he heads the Tergar Meditation Community and recently completed four years as a wandering yogi.