Situated in the traditional Tibetan region of Kham, Larung Gar Buddhist Academy was founded in 1980 by the highly respected teacher Khenpo Jigme Phuntsok (1933–2004), a lama of the Nyingma tradition of Tibetan Buddhism. With estimates putting the population at between 10,000 and as high as 40,000 monks and nuns, the institute is widely considered to be the largest center of Buddhist learning in the world.

In June the government of Serta County issued an order stating that by October 2017 only 1,500 monks and 3,500 nuns would be allowed to live at the site. The action follows similar moves in 2001, when state authorities organized a mass eviction of residents from the institute, and late last year, when further evictions were accompanied by an order to reduce admissions to curb the rapid growth of the monastic population. The order did not give a reason for the decision, but cited two major government meetings during which Chinese President Xi Jinping had stressed “national unity” and the necessity for religious groups to support the Communist Party and “merge their religious doctrines with Chinese culture.” (Los Angeles Times) 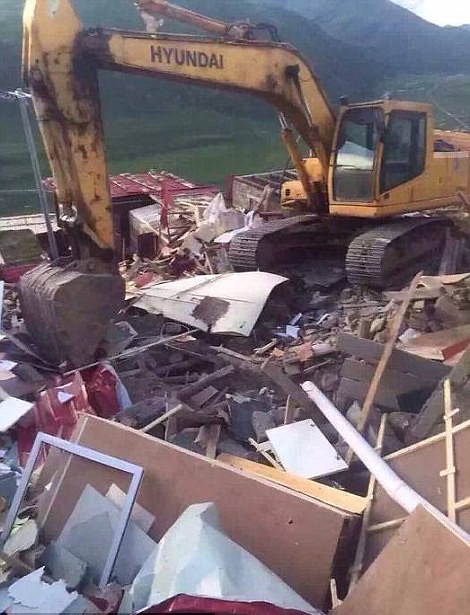 An excavator sifts through the remains of a building at Larung Gar. From
dailymail.co.uk

Robert Barnett, a Tibet scholar at Columbia University, noted that the institute’s population is “many times larger” than it was in 2001. “How big is it? No one will say,” he said. “Officials in the area don’t want to say because that will get them in trouble [with higher-ups], and the leaders of the encampment won’t say because that would cause problems with the officials who tolerated the growth for the last 10 to 15 years.” (Los Angeles Times)

According to The Associated Press, a Sertar County government official said by telephone that police were not demolishing buildings but renovating them, without giving further details. The official gave only her surname, Zhang, because she was not authorized to speak to the media.

Tsering Tsomo, director of the Tibetan Centre for Human Rights and Democracy in Dharamsala, India, said monastery leaders including Larung Gar’s abbot, Tsultrim Lodroe, had been maintaining a low profile while appealing for “restraint and sobriety” among the institute’s population. “The gist of what they [monastery leaders] are calling for is to let the authorities proceed with the partial demolition, as it would only cause loss to some practitioners and their dwellings,” Tsering said. “Because the continued survival of the Larung Gar itself is more important.” (Mail Online) Images have been shared on social media showing residential cabins that have been demolished. From bbc.com

The site of Larung Gar was chosen by Khenpo Jigme Phuntsok because of its historical connection to the Vajrayana tradition. It is said that His Holiness the first Dudjom Rinpoche, Dudjom Lingpa (1835–1904), stayed here with his 13 disciples. The academy was conceived as an independent center of study that would help revitalize the Dharma and revive the study and practice of Tibetan Buddhism following China’s Cultural Revolution (1966–76), during which Tibetan Buddhism was suppressed and thousands of monasteries were destroyed. The institute has become renowned for the quality of both its religious and secular education. English, Chinese, and Tibetan languages and modern computer studies are taught alongside a traditional non-sectarian Buddhist curriculum. About 500 khenpos—holders of doctoral degrees in divinity—have studied at Larung Gar Buddhist Academy.