Five Buddha statues at the exhibition. From left: Bhaishajyaguru from Janggok Temple; Vairocana; Avalokiteshvara; Amitabha; and another Amitabha from Daeseung Temple. From koreajoongangdaily.com

A landmark exhibition at the National Museum of Korea is offering a rare opportunity to gain a glimpse of key artifacts from the country’s long and profound relationship with Buddhism. Titled “Goryeo: The Glory of Korea,” the special exhibition, which runs until 3 March, commemorates the 1,100th anniversary of the establishment of the Goryeo kingdom, gathering together more than 400 artifacts from collections in Korea and overseas, including a wide range of Buddhist artifacts from the ancient dynasty.

“It was a long and difficult process,” said National Museum of Korea director general Bae Ki-dong. “But our staff worked very hard and managed to bring in some 450 artifacts from 56 different organizations and institutions from both Korea and abroad including the United States, England, Italy, and Japan.” (Korea JoongAng Daily)

A printing block of the Avatamsaka Sutra carved in wood in 1098, part of the collection of ancient woodblocks kept at Haein Temple. From koreana.or.kr

“People might remember Goryeo as a short-lived country, but in fact the 474-year history of Goryeo is on par with the Joseon Kingdom, which lasted for 518 years,” said exhibition curator Yoo Su-ran. “We are more familiar with cultural heritage from Joseon, but much of Joseon’s culture is based on the legacy of Goryeo.” (The Korea Times) Statue of Master Huirang Daesa, 10th century. Dry lacquer on wood, 82 centimeters. Master Huirang (889–966) was a teacher of Goryeo founder Wang Geon and the patriarch of Haein Temple. From koreatimes.co.kr

“As the successor to Unified Silla and Balhae, Goryeo integrated the diverse cultures of its predecessors to develop an open and cosmopolitan society enjoying active exchanges with neighboring countries,” said a museum official. “Somehow, the era has been overshadowed by other dynasties even at the museum. Therefore, we want to take this opportunity to really introduce the beauty of Goryeo art through refined celadon pieces and Buddhist paintings.” (Korea JoongAng Daily)

The exhibition present numerous examples of artworks produced for Buddhist temples, which were major art patrons along with the royal court. As the state religion of Goryeo and the center of life and spirituality, Buddhism became a source of inspiration for the cultural achievements of the kingdom, which highly valued Buddhist philosophy. 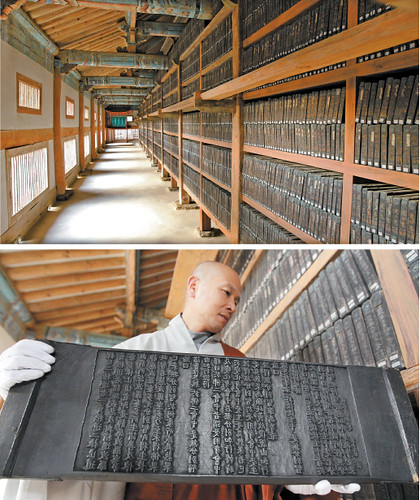 The Tripitaka Koreana, engraved on 81,258 woodblocks that are
stored at Haein Temple. From koreajoongangdaily.com

Although it could not be removed for the exhibition from its depository at Haeinsa, a Buddhist temple on Mount Gaya in South Gyeongsang Province, a key Buddhist artifact of the Goryeo era is the Tripitaka Koreana. Listed by UNESCO as a World Heritage item, the Tripitaka Koreana, engraved on 81,258 woodblocks between 1237 and 1248, is recognized as the most complete extant collection of Buddhist texts, laws, and treatises. Organized in more than 1,496 titles and 6,568 volumes, the text contains no known errors or errata in its 52,330,152 characters. As well as Buddhist scriptures, the Tripitaka Koreana included a collection of other texts and documents, including travelogues, Sanskrit and Chinese dictionaries, and biographies of notable male and female monastics.

“We’ve discussed with many institutions to have all the great artworks and artifacts of Goryeo in one place at the exhibition,” said Bae. He noted that about 90 Goryeo artifacts for the exhibition were confirmed from overseas collections, including a Goryeo-era painting of Amitabha Buddha from the Museo Delle Civilta in Italy. (Korea JoongAng Daily) 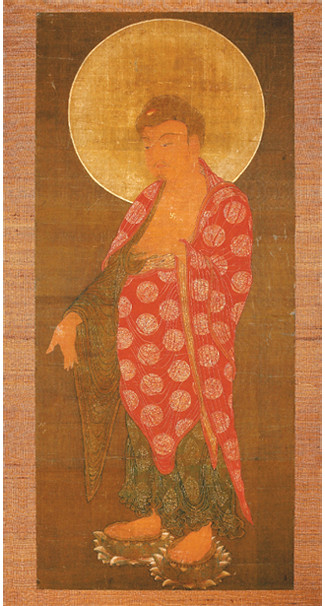 A rare painting of Amitabha Buddha, on loan for the
exhibition from the Museo Delle Civilta in Italy.
From koreajoongangdaily.com

A statue of Master Huirang Daesa (889–966), a renowned Buddhist monk who taught and mentored King Taejo Wang Geon, also features in the exhibition, on display outside its home temple Haeinsa for the first time.

“This is the only remaining statue of a monk from the 10th century. The front is made of dry lacquer, while the back is wood,” said Yoo. “The statue is very realistic with asymmetric shoulders as if modeled after the actual person.” (The Korea Times)

Visitors can also view Buddha statues crafted in a variety of media, including bronze, steel, and lacquered fabric. Some of Buddha images have artifacts enshrined within them that provide a rare glimpse of Goryeo culture. Bhaishajyaguru from Janggoksa, a temple in South Chungcheong Province, has a prayer written on a 10-meter bolt of fabric by the monk Baegun Gyeonghan (1298–1374). 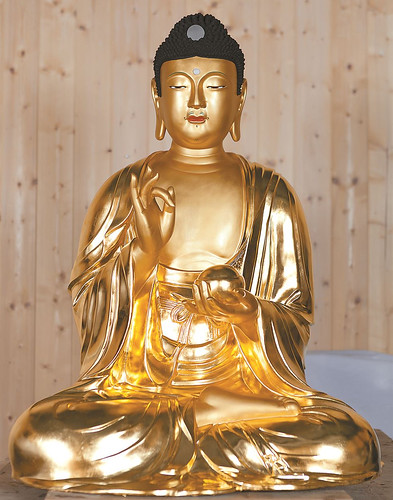 The museum was unfortunately unsuccessful in obtaining from the National Library of France, the Jikji Simche Yojeol, or Anthology Teachings of Zen Buddhist Priests, written by the Buddhist monk Baegun (1298–1374). Dated to 1377, it is the world’s oldest extant book printed with movable metal type.

My Journey on the Path of Won Buddhism
Engaging with Suffering, Realizing Freedom: An Interview with Ven. Pomnyun Sunim
Jungmyungsa Buddhist Temple: A Haven of Korean Buddhism in Queens