Nima, right, and Dawa are now home with their parents after spending five months in Australia. From news.sky.com

Twenty-month-old former conjoined twins Nima and Dawa returned home to the Buddhist Himalayan kingdom of Bhutan last Thursday after traveling to Australia some five months ago to undergo a life-life-changing and life-saving procedure to surgically separate the two girls.

The two sisters and their mother Bhumchu Zangmo, landed safely at Paro International Airport on 7 March after a 22-hour journey home, where they were warmly received by a welcoming throng of well-wishers that included media representatives and doctors, as well as the girls’ father Sonam Tshering and other family members.

The girls, born at Phuentsholing General Hospital in Bhutan on 13 July 2017 were joined at the lower chest to just above the pelvis, and shared a liver. They were flown to Australia in October last year, accompanied by their mother, for the operation to separate them—a procedure that ended up taking more than six hours to complete, with contributions from some 25 surgeons, specialists, and nurses at Melbourne’s Royal Children’s Hospital. 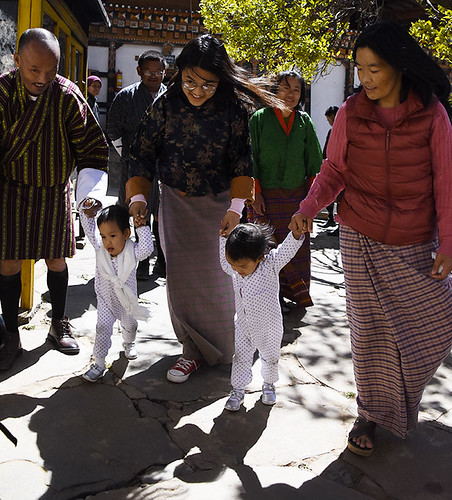 On the way from Paro International Airport, the family visited the
Buddhist temple Tachog Lhakhang. From kuenselonline.com

Sandwiched between economic heavy-hitters China and India on the edge of the mighty Himalayan mountain range, the tiny Buddhist Kingdom of Bhutan is perhaps best known for prioritizing “Gross National Happiness” over the shortsighted acquisitiveness of development based solely on economic growth, and for its sustainable approach to environmental stewardship. The kingdom is also unique in being the world’s only remaining Vajrayana Buddhism nation. The spiritual tradition is embedded in the very consciousness and culture of this remote land, where it has flourished with an unbroken history that dates back to its introduction from Tibet  in the 8th century by the Indian Buddhist master Padmasambhava, also known as Guru Rinpoche.

Father Sonam Tshering wept as he set eyes on his daughters for the first time since they set out for Australia in October last year, telling media representatives it felt like a miracle. “I couldn’t sleep last night,” he said. Six months earlier, he added, he didn’t know “if surgery would be possible and if it was, what would be the outcome.” (Punch)

The family headed from the airport to 15th century Buddhist monastery Tachog Lhakhang to light a butter lamp in a prayer of gratitude.

Although their father Sonam said he felt hopeful when he learned that the twins would be taken to Australia for the complex surgerical procedure, waiting behind in Bhutan over the intervening months with the girls’ older brother and three older sisters, he couldn’t find peace until he knew the surgery had been successful. “I thank His Majesty The King, all the people who showered us with their prayers and well wishes, and the Australian government for giving a new life to my daughters,” he said. (Kuensel Online) A medical team worked for more than six hours to separate the twins. From abc.net.au.

The family was able to relax and share some quality time together at a guesthouse in the Bhutanese capital Thimpu, while Nima and Dawa played with toys. The family was due to return to their home in the town of Phuentsholing on the border with India on Sunday.

The girls’ surgical procedure was reported to have cost an estimated A$250,000 (US$180,000). Medical personnel in Bhutan will continue to provide support for the girls, although they are not expected to need more than physiotherapy as they grow. Sonam Tshering holds one of his twin daughters as he spins prayer wheels at Tachog Lhakhang. From sbs.com.au