Wat Arun by night. Photo by Diego Delso. From wikimedia.org

The recently completed restoration of one of Bangkok’s most famous landmarks, the Buddhist temple commonly known as Wat Arun, has been the target of some criticism on social media, but officials in charge of giving the more-than-300-year-old monument a major facelift insist that the work was carried out in line with the original design of the structure.

Responding to online critics, who say the restoration—the biggest such project for the temple in 100 years—has changed the original design and iconic architectural features, the head of the Fine Arts Department, insisted that the original 120 decorative designs dating back to the reign of King Rama II (r. 1809–24), who commissioned the temple’s distinctive spires that stand today, had been carefully studied before the renovation. However, Anandha conceded that due to the poor condition of the spires, as much as 40 per cent of the original design had required completely new redecoration. 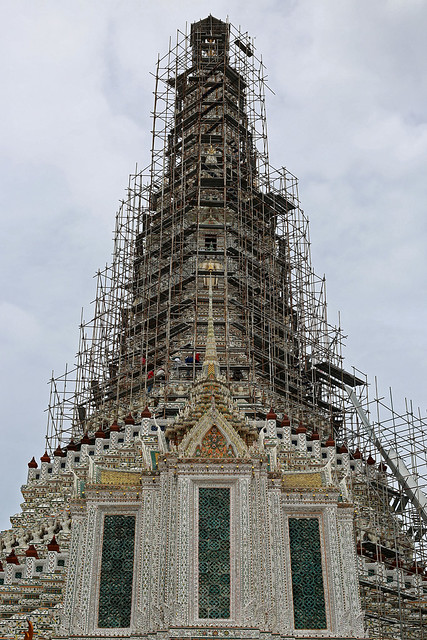 The main prang during renovation. From nationmultimedia.com

Wat Arun Ratchawararam Ratchawaramahawihan, better known in English as the Temple of Dawn, was built during Thailand’s Ayutthaya period (1351–1767) and has become one of the Buddhist kingdom’s most well known icons and a popular tourist attraction. The temple is best known for its five graceful spires that tower majestically over the Thonburi bank of the Chao Phraya River.

Originally named Wat Makok, the temple was renamed Wat Chaeng (Temple of the Dawn) by Taksin the Great (r.1767–82), who is believed to have reached the temple by river at sunrise when he came to establish his new capital in Thonburi after the fall of the kingdom of Ayutthaya. Following a series of restorations over the next 100 years that included increasing the height of the central tower, the temple received its current name from King Rama IV (r.1851–68), who initiated further renovations. The latest major restoration began in 2013. “The Fine Arts Department made careful examinations before starting the restoration. We replaced the damaged parts but still retained the original designs,” said Anandha Chuchoti, director-general of the Fine Arts Department, which was in charge of the renovation. “The main purpose was not to preserve the old features, but rather to maintain the original condition as much as possible.” (The Nation)

Anandha said the department had surveyed the stupas, recoding details of the patterns and colors on the decorative tiles with a view to preserving the the original design and look as possible. He noted that about 120,000 of a total of 300,000 pieces had to be replaced during the restoration. “But we can’t deny some surfaces had to be reworked, which may have affected the original patterns, which has left certain exterior spots visibly unclear," he added. (Bangkok Post)

The temple’s iconic stupa is an architectural representation of Mount Meru, the center of the world in Buddhist cosmology. The four-corner prang, which house images of the guardian deities of the four cardinal directions, reinforce this mystical symbolism. The main tower, which stands 82 meters tall, is made up of several ornate tiers that represent worlds within worlds.

Wat Arun’s assistant abbot, Phra Sakkaya Puttiyawong, explained that the spire’s former greenish hue was a result of “stains left by moss,” which was removed during the extensive restoration revealing the white exterior of the stupas. “They cleaned moss-tainted stupas and restored the surface,” he added. “This whitened the stupas, returning them to their original beauty.” (Bangkok Post)

A celebration to mark the completion of the restoration program is scheduled to take place for 10 days from 27 December–5 January 2018, featuring a ceremony to pay homage to King Taksin, sound-and-light shows, cultural performances, and a royal barge procession.