The number of Thai women seeking monastic ordination is growing. From reuters.com

Unswayed by institutional opposition and ingrained indifference, female Buddhist monastics in Thailand continue to fight for their right to practice Buddhism in the Theravada ascetic tradition. Perhaps the most prominent figure in this movement is 79-year-old Dhammananda Bhikkhuni, head of Songdhammakalyani Monastery, who has witnessed a growing number of Thai Buddhist women seeking full ordination in the spirit of the fourfold sangha* established by Shakyamuni Buddha, with the help of Buddhist communities overseas—usually in India and Sri Lanka.

Thailand is a predominantly Buddhist country, with 94.5 per cent of the nation’s population of 69 million identifying as Buddhists, according to government data for 2015. The Southeast Asian kingdom has some 40,000 Buddhist temples and almost 300,000 monks. However, the country has never officially recognized the monastic ordination of women, and bhikkhunis do not generally enjoy the same level of societal acceptance as their male counterparts. By comparison, the Mahayana branch of Buddhist traditions widely practiced in East Asia have historically been much more accepting of female ordination.

Yet communities of female renunciants do exist and are growing across Thailand, committed to overturning the institutionalized chauvinism that stands in the way of female monasticism. Now numbering about 270 nationwide and supported by more progressively minded bhikkhus they seek to re-establish the fourfold sangha as the optimal holistic and inclusive structure in which all segments of society can study and share the Dharma.** 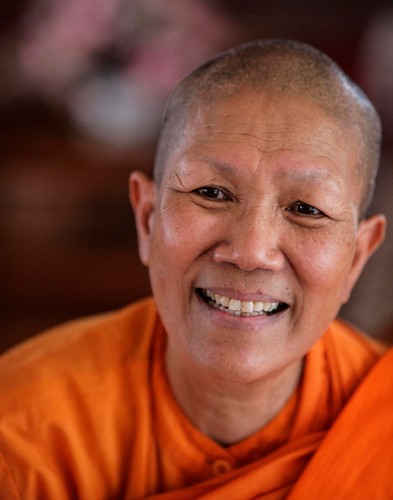 Ven. Dhammananda ordained in Sri Lanka in 2003, becoming Thailand’s first bhikkhuni in the face of considerable public opposition. Formerly known as Chatsumarn Kabilsingh, an author and professor of religious studies and philosophy at a prominent Thai university, and now the abbess of Songdhammakalyani Monastery in the central city of Nakhon Pathom, she states her case simply and with a gentle logic, noting that the Buddha himself founded the bhikkhuni order, which included his own adoptive mother.

According to historians, bhikkhunis flourished for 1,000 years in India and Sri Lanka, but the spread of Islam and the impact of numerous regional conflicts caused them to almost disappear. In Thailand, a proclamation by the kingdom’s Buddhist Sangha Supreme Council in 1928 expressly forbade female ordination. Instead, women in the country may only become non-ordained nuns, known in Thai as maechi, who wear white or pink robes and observe either eight or ten precepts.

Today, many objectors to female monasticism center on recent tradition and formalities and the fact that monastic rules require that ordained bhikkus and bhikkhunis from an unbroken lineage be present to ordain a new bhikkhuni.

The Thai government, which has also reportedly repeatedly denied visas to Sri Lankan Buddhist monks who want to ordain women in Thailand, is adamant that gender discrimination is not behind the resistance to change, noting that Thai women are free to be ordained overseas. “Women can’t be ordained here, but no one stops them from doing that overseas,” said National Office of Buddhism spokesman Narong Songarom. “They just can’t be ordained by Thai monks, that’s all.” (Reuters)

Despite the lack of official acceptance, the movement is gaining momentum. In December, 49-year-old Boodsabann Chanthawong joined 20 other women being ordained as novice monks at Songdhammakalyani Monastery. “I’m going to overcome this obstacle and become ordained like I’ve always wanted,” the 49-year-old businesswoman said with tears in her eyes. (Reuters)

And amid a spate of disturbing media reports of misbehavior and impropriety among the male monastic community, the prominent Buddhist scholar and activist Sulak Sivaraksa has even predicted that if female monks—many of whom are highly educated, holding advanced degrees and with backgrounds as business executives—continue to conduct themselves in accordance with the Vinaya, they might one day lead the monkhood by example.

For now, however, the female monasticism still faces an uphill battle in Thailand. Because bhikkhuni ordinations must take place in India or Sri Lanka, there are few opportunities for training and mentoring after ordination, to educate new monastics and instill discipline. A dearth of senior bhikkhunis is also a challenge, since most female monks in Thailand have been ordained for less than a decade and are therefore not yet qualified to teach or ordain others. Ven. Dhammananda fears a possible leadership vacuum after she is no longer around to conduct ordinations.

Yet Ven. Dhammananda remains unfazed in her commitment to the path she has chosen. The female monks at Songdhammakalyani Monastery, she says, are accustomed to dealing with people who oppose them. “We don’t burden ourselves with their ignorance. If every step we take we have to care that we get approval, then we cannot do anything.”  said Ven. Dhammananda. “Because I am an academic I always check what the text says, and then I am reassured that we are on the right path.” (Vice) Female monastics receive food during their morning alms round. From asia.nikkei.com