A US-based environmental engineer is calling for an urgent review of development policies and strategies for Asia’s Mekong River, citing the unsustainable and far-reaching economic, social, and environmental impact of poorly implemented infrastructure projects along the river, particularly in the form of massive hydroelectric dams.

The Mekong River, the 12th longest in the world, travels some 2,700 miles from its source high in the Tibetan Plateau, running through China’s Yunnan Province to Myanmar, Laos, Thailand, Cambodia, and Vietnam. Second only to the Amazon in terms of biodiversity and supporting more than 80 million people, the Mekong is already heavily dammed, with many more dams planned and under construction along its length: China has built six dams on the Mekong since 1995 and plans another 14, while downriver countries such as Laos plan an additional 11 large dams, making it the fastest-growing large river basin in the world in terms of hydropower construction.

“Starting from its origin in Tibet, the countries and peoples along the Mekong River are predominantly Buddhist,” said Khanh T. Tran, president of Nevada-based AMI Environmental, a private technical research and engineering company that provides solutions to environmental problems. “All three major Buddhist traditions are practiced by its inhabitants: the Theravada tradition in Cambodia, Laos, Myanmar, and Thailand; the Mahayana tradition in China and Vietnam; and the Vajrayana tradition in Tibet.” (The Buddhist Channel)

Tran emphasized that dam construction was motivated by greed rather than long-term, sustainable benefits. “The three poisons,* mainly greed and ignorance, are the fundamental causes of the environmental crises and conflicts on the Mekong,” he said, citing the large hydropower projects planned by Laos as an example. “Profit is the sole motive since the generated power will be sold to Thai users and the large loans required for building the dams are huge investments in a tiny economy such as Laos.” (The Buddhist Channel) 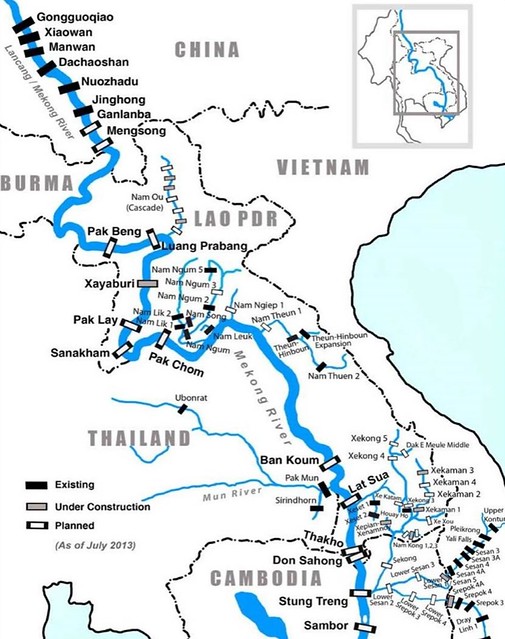 Existing and planned dams along the Mekong as of July 2013. From
thanhniennews.com

Infrastructure development in the Mekong River Basin is a highly controversial topic, with the World Wildlife Fund noting that the region is particularly vulnerable to global climate change. The US-based non-profit Conservation International ranks the Greater Mekong Subregion as one of the top five most threatened hotspots in the world in terms of biodiversity.

Tran said any short-term economic benefits were outweighed by the long-term sufferings of thousands who have been forced to resettle to make way for existing projects and those under construction, and the millions of poor fishermen and rice farmers who have experienced reduced productivity as a direct result of their impact. He pointed to the repercussions of hydroelectric development being felt on a multitude of fronts, from damaged biodiversity, with numerous fish species threatened with extinction, to widespread flooding during wet seasons and reduced water flows during dry seasons. In addition, he said, China has dredged and enlarged major stretches of the river to create navigable channels for large commercial vessels, including oil tankers, and while downstream rice fields no longer receive the nutrient-rich sediment traditionally delivered by the river, dams in Yunnan are silted up, shortening their useful lifespans.

Tran urged the concerned countries to consider the Buddhist practice of compassion for all sentient beings—for the communities and populations living in the Mekong basin as well as the fish species of the Mekong—as a foundation for collaboration in managing the river’s resources in accordance with procedures drawn up by the Mekong River Commission (MRC).

Established in 1995 by Cambodia, Laos, Thailand, and Vietnam, the MRC is an inter-governmental agency and advisory body focused on the joint management of the shared water resources and sustainable development of the Mekong River. China and Myanmar became “dialogue partners” of the MRC in 1996. 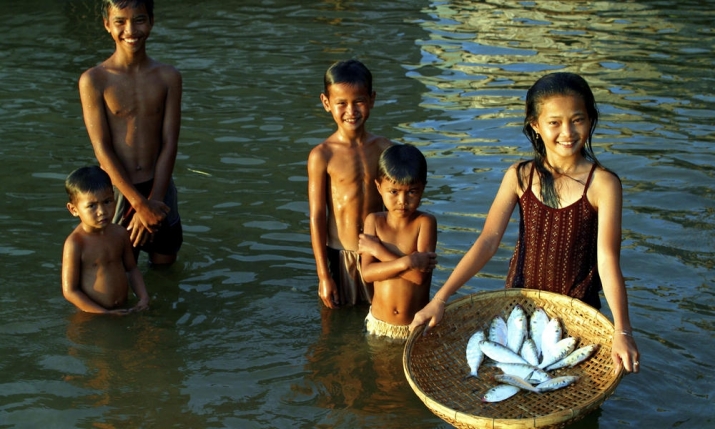 The Greater Mekong Region is home to more than 300 million people from nearly 100 distinct ethnic groups. From worldwildlife.org

“Since the countries and peoples along the Mekong river are mainly Buddhists, the sangha can play an important role in shifting [the focus of economic development away from] the construction of dams,” he said. “In countries with [a] Theravada tradition (Cambodia, Laos, Myanmar, and Thailand), the sangha has enormous influence . . . to guide the government in adopting the right policies. More importantly, it can educate its lay devotees and the general public about the costs and environmental impacts of dams, and the benefits of clean, renewable energy and light manufacturing.” (The Buddhist Channel)