Modern-day enthusiasm for the centuries-old Buddhist practice of making merit by releasing captive animals back into the wild has raised concern among Hong Kong’s conservation community over the threat to the territory’s dwindling population of horseshoe crabs. Although the practice is aimed at saving lives, conservationists say the good intentions of some religious groups are actually endangering horseshoe crabs, an ancient species of marine arthropod.

“They think they are letting them live, but actually they’re sending them off to die,” said Professor Kenneth Leung Mei-yee, an expert in aquatic ecology at the University of Hong Kong. (South China Morning Post)

According to the South China Morning Post, fishermen in Hong Kong catch horseshoe crabs with the intention of selling them to well-meaning religious groups. But the crabs are usually released near piers in the city, where the water is more polluted, and they often fail to adapt to their new environment. Horseshoe crabs can only survive on muddy shores as adolescents or in waters close to their natural spawning site as adults.

A study conducted in 2008 by Hong Kong’s City University, home to the territory’s only breeding facility for horseshoe crabs, revealed that more than 60 per cent of the crabs sold in Hong Kong are bought for re-release into the wild. 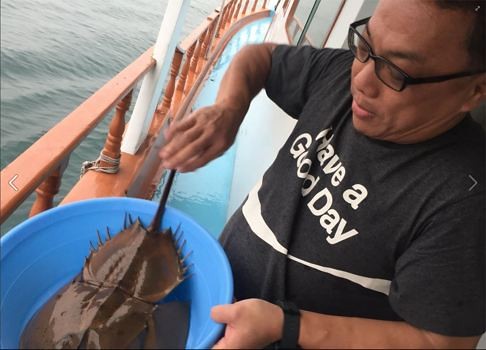 A man releases a horseshoe crab into the sea near Tsuen Wan as part of a
Buddhist ceremony. From scmp.com

According to conservation experts, land development and pollution in Hong Kong have destroyed several of their natural costal habitats, resulting in a marked decline in the population of horseshoe crabs. Around 7,000 adolescent horseshoe crabs are estimated to be living on the shores of Lantau Island and in the northeastern New Territories, among other areas.

Horseshoe crabs are sometimes referred to as “living fossils,” the species having lived on Earth for more than 450 million years—predating dinosaurs—and surviving five mass extinctions from volcanic eruptions, asteroid strikes, and ice ages. “Humans have only appeared for a short time on earth, but the impact we have had on [the crabs] is far more than what they have faced in the past 475 million years,” said Joe Cheung Ho-yi, assistant manager of community education at the Ocean Park Conservation Foundation. (South China Morning Post)

Life release has been growing in popularity in Buddhist communities around the world. Before being freed, the animals are blessed by Buddhist monastics or devotees and the accumulated merit is dedicated to someone who is ill or has died in the belief that the person will benefit. Hong Kong Release Live, a Buddhist group that organizes such activities at Tsuen Wan Pier in Hong Kong’s New Territories, claims to have saved 140 million lives in the three years since they started the practice. The South China Morning Post reports that once a week a group of 20–30 people accompanied by a monk board a boat filled with buckets of live seafood bought from markets and take turns releasing them back into the sea.

Responding to the criticism from conservationists, Hong Kong Release Live coordinator Rosa Chan, who admitted releasing horseshoe crabs on several occasions, declared, “You should thank us for releasing them back in the wild. Nobody will eat them and the fishermen are just earning money off of us.” She declined to directly address the potential danger for horseshoe crabs. 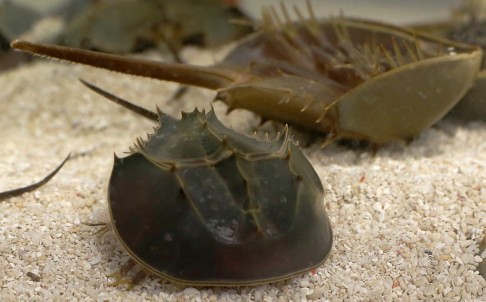 With fossils dating back before dinosaurs, horseshoe crabs have survived
multiple extinction to face threats now in the 21st century. From
scmp.com

Conservationists believe the solution to the problem is to educate the public and raise awareness. “It’s like shark fin. If people stop eating it, then the market will eventually disappear,” said Cheung of the Ocean Park Conservation Foundation. “But if the demand is still there, even with a government ban, people will find ways to develop an underground market.”