Dzigar Kongtrul Rinpoche’s Latest Artwork on Show in the US Gate To The Five Lights, by Kongtrul Jigme Namgyel. From Dorje Kirsten. 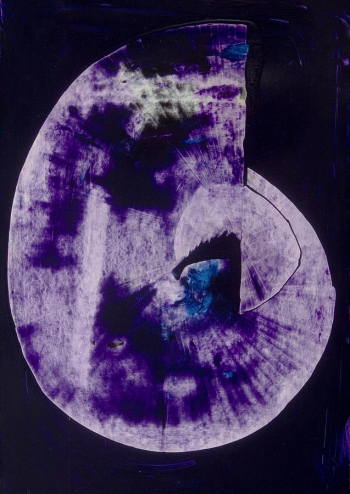 Untitled 234, by Kongtrul Jigme Namgyel. From Dorje Kirsten.
Dzigar Kongtrul Rinpoche is the third tulku, or incarnation, of Jamgon Kongtrul Rinpoche. Considered a great meditation master and teacher within the Nyingma tradition of Buddhism, he has gained recognition as the founder and director of the Mangala Shri Bhuti meditation centers. What may surprise more than a few people who do not know him well is that he is also a painter of considerable talent, trained in the French Impressionist tradition. This summer and fall, he is showing works painted at his new studio in Crestone, Colorado, at different venues across the States.
Rinpoche moved to the United States with his family in 1989, and in 1990 became the spiritual director of Naropa University in Boulder, Colorado. Founded by Chögyam Trungpa Rinpoche, Naropa is known for bringing some of the most creative artistic and spiritual minds in America together for dialogue. There Dzigar Kongtrul Rinpoche encountered many Western painters, and found himself admiring the work of Kandinsky and Picasso.
By the mid-1990s, he had begun to study under the French Impressionist painter Yahne Le Toumelin. Yahne was said by André Breton in the 1960s to be one of the few women painters to make a mark in her generation. She herself has been highly influenced by Tibetan Buddhism due to a meeting with Kangyur Rinpoche in 1968, and is also the mother of the great translator Matthieu Ricard. Through her tutelage, Dzigar Kongtrul Rinpoche began to play with the spontaneity of paint and form on canvas. In particular, Yahne teaches a style which relies on the mixing of glue and oil paints on special palettes.
Rinpoche finds no distinction between the spiritual and creative sides of life. In a talk called “Natural Vitality” given at Tibet House in New York in 2008, he said, “I wish to urge students of the Dharma who may have forsaken their creative impulse in favor of practice to realize there is no conflict between creativity and meditation. Creativity can be understood, in essence, to be the practice of our own nature and that nature’s expression. You may find your way in to the nature through creativity or you may come out from the nature to express creativity. Both have to be appreciated as the best of our mind’s potential.”
His works are intense plays of color, light, darkness, form, and formlessness. By no means does one fall into casual experiences of peacefulness or restfulness when viewing them. They are engaging and intense, some of them dark, and others hopeful. In this sense they are tremendously free, and like mind itself, express vast ranges of experience rather than just simple quietude.
Dzigar Kongtrul Rinpoche shows under the name Kongtrul Jigme Namgyel. His paintings have now been published in two beautiful books: Light Coming Through: The Paintings of Kongtrul Jigme Namgyel, which is an overview of the collection that was displayed at his first public exhibition, held in Taiwan in 2005, and Natural Vitality: The Paintings of Kongtrul Jigme Namgyel, which is an overview of his collection displayed at Tibet House in October 2007.

On 15 July, during his annual summer teaching retreat, Rinpoche had a showing of his latest works at the home of Laura and Berry Weiss in Boulder. The art featured in the salon show, titled Wide Eye, had all been painted at his new studio in Crestone. He will also be having an exhibition at Garrison Institute in New York on 12 October. His works are available as cards, prints, and originals from his art website.


Back to Buddhist News