Dalai Lama Concludes “Tree of Faith” Teaching to over 3,000 Students His Holiness greets some of the Tibetan students gathered to hear his teaching at the Tsuglagkhang. Photo by Tenzin Choejor. From tibetanreview.com

His Holiness the Dalai Lama on Friday concluded a three-day teaching on Dromtönpa’s Tree of Faith: A Self-Exhortation at the Tsuglagkhang, the main temple in McLeod Ganj, Dharamsala, in the northern Indian state of Himachal Pradesh. Primarily directed at the more than 3,000 school- and college-age Tibetan students gathered for the annual event, the teaching was attended by more than 10,000 people overall, including some 2,000 visitors from 66 countries.

Dromtönpa Gyelwe Jungne (1005–64) was the foremost disciple of the Bengali Buddhist master Atisha Dipamkara Shrijnana (982–1054). Dromtönpa established the Kadampa school of Tibetan Buddhism, and in 1056 founded Reting Monastery in Tibet. He is considered to be the 45th incarnation of the bodhisattva Avalokiteshvara, thereby representing an antecedent of what would become the Dalai Lama lineage, the first of whom is said to have been the 51st incarnation of Avalokiteshvara.

Before holding a ceremony to generate the awakening mind of bodhichitta on the final day of the teaching, the Dalai Lama quoted the future Buddha Maitreya’s Abhisamayalankara (Ornament of clear realization) sutra, which describes the entire journey of the bodhisattva, from the generation of bodhichitta—the intention to become enlightened for the sake of all sentient beings—to the attainment of full enlightenment.

“Whenever sentient beings think of themselves, they have a sense of ‘I’ in relation to their body and mind, their family and friends,” His Holiness noted afterwards. “Human beings have a sense of ‘I’ as the controller of their psycho-physical aggregates. But Buddhist teaching rejects any such objective existence of the self. It rejects any perception of a solidly existent ‘I.’

“If you only think of yourself, you put yourself at a disadvantage. If, instead, you open your heart and extend your concern to others, you’ll be free of fear and anxiety. If you think of all sentient beings as being like you in not wanting suffering, self-cherishing will be reduced. Look at those around you. Those who are respectful and concerned about others tend to be happier; those who are more self-centered are less so. Think of those who share their sweets and whatever good things they have and those who keep them to themselves—which of them seems to be happier?

“As young Tibetans, extend the scope of your thoughts to others—to the 6 million Tibetans in Tibet, to the other people of Asia, to the whole world’s population, and to all sentient beings. Bodhichitta . . . includes two aspirations, the thought to benefit others and the thought to realize Buddhahood.” (His Holiness the 14th Dalai Lama of Tibet) 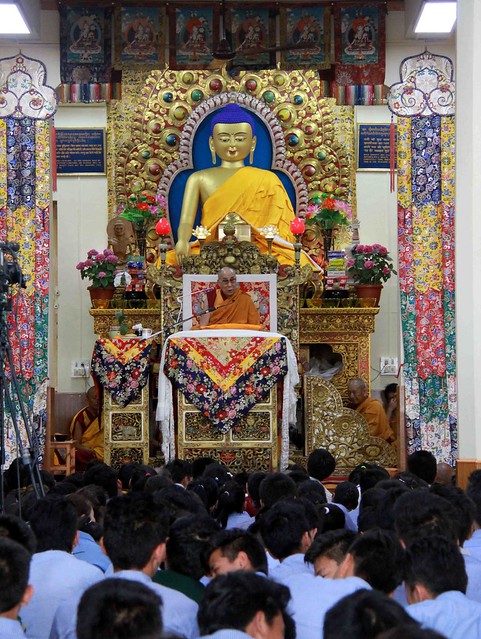 The Dalai Lama explains Tree of Faith: A Self-Exhortation to Tibetan
students. Photo by Norbu Jinpa. From tibetanreview.net

The Nobel Peace Prize laureate observed that he himself had once felt that, while admirable, bodhichitta was too difficult a trait to develop. His Holiness then explained that in 1967, he had received an explanation of Shantideva’s Guide to the Bodhisattva’s Way of Life (or The Way of the Bodhisattva) from the lay Buddhist teacher Khunu Lama Rinpoche (1894–1977), who suggested that the Dalai Lama also teach it as often as he could. As a result, he recalled, his interest and understanding slowly grew and he began to feel that bodhichitta was more achievable.

In his closing remarks, the Dalai Lama related the parable of a learned yet elderly lama from the traditional Tibetan province of Amdo. When the lama was invited to a distant village to teach, he replied that he was too old to travel; however the villagers insisted, saying, “please come anyway even if it’s only to give us your blessings.” So the lama undertook the journey to the village, where he gave a long, in-depth discourse, at the end of which he told the villagers, “I’m not the sort of person who places his worldly hands on other people’s heads to help them to liberation. I can only give you instructions to help you understand the teachings of the Buddha.”