Conservationists in China are turning to high-tech solutions to promote the centuries old Buddhist treasures stored within the man-made caves known as the Mogao Grottoes of Dunhuang, in China’s Gansu Province, in a bid to strike a balance between preserving an irreplaceable monument to Buddhism’s ancient heritage and sharing that wealth of art, culture, and learning with the world.

The famed caves, an ancient network of Buddhist grottoes and temples hewn into the side of a sandstone cliff in the Gobi Desert, are a repository of some of the finest and oldest works of Buddhist art in China. A UNESCO World Heritage Site since 1987, the Mogao Caves, also known as the Thousand Buddha Grottoes, include some 492 Buddhist temples dating from the fourth to the 14th centuries, decorated with more than 45,000 square meters of exquisite frescoes and some 2,000 sculptures. During the period that the area served as a strategic oasis and major crossroads on the ancient Silk Road, the caves were visited by countless travelers, merchants, and Buddhist pilgrims, and are now more popular than ever. Cave No.158 of the Mogao Grottoes. From gotohz.com The nine-story cave No.96 houses a colossal Tang dynasty Buddha statue some 33 meters high. From news.getty.edu

Sixty-five of the caves that are currently accessible to tourists are now outfitted with sensors that allow staff to remotely manage the interior climate and monitor tourist traffic. Visitors to the ancient Buddhist site reportedly exceeded 8 million domestic and foreign visitors in 2016—a 21.37 per cent increase from the previous year. To protect the historic relics and fragile works of art from the massive increase in public interest, a daily limit on the number of visitors has been in place since 2014 of 6,000 reserved tickets and an additional 12,000 “emergency” tickets during the peak tourist season.*

The system also helps the site accommodate the influx of tourists by automatically dispatching buses to shuttle visitors back and forth between the digital exhibition center, which offers a virtual tour of the grottoes, and the actual caves some 15 kilometers distant.

Although tourists are currently permitted to enter up to 12 caves per visit, they can also explore other chambers at the ancient complex via virtual representations that can be accessed on mobile devices. The digital Dunhuang experience has also been extended to social media in form of an interactive chatbot named Dunhuang Xiaoice, which serves as a virtual tour guide via the Chinese social media app WeChat. Co-developed by Microsoft Research Asia and the Dunhuang Research Academy, Dunhuang Xiaoice is a 24-hour repository of tourist information, alongside a wealth of data and research on the history of the site and the artworks and artifacts it houses.

“[Dunhuang Xiaoice] is supposed to spread the culture, history, tourism, and academic research of Dunhuang through free chats,” said Sun Zhijun, director of the Dunhuang Research Academy’s internet division. “Besides that, it can independently learn information about Dunhuang by searching online for articles concerning the grottoes to ensure the accuracy and timeliness of the answers it delivers, although it has already stored tens of thousands of questions and answers from references of the Dunhuang Encyclopedia.” (China.org.cn)

The oldest of the Mogao caves was excavated in 366, and the site was gradually developed and expanded over the next 1,000 years with growth of trade routes that made up the ancient Silk Road. The 735 caves hold more than 2,400 irreplaceable works of art that are invaluable in the study of the history of Buddhism and its cultural and social impact in China. 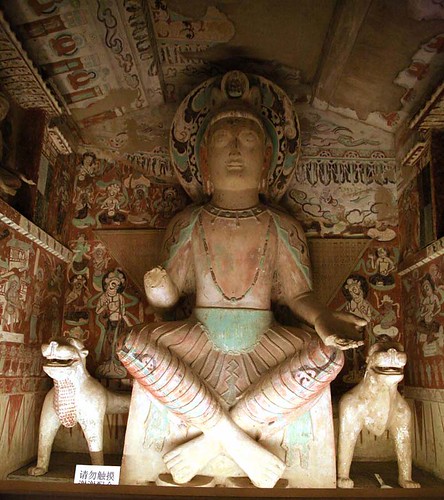