The Nagaloka campus and its resident Nagarjuna Institute in the city of Nagpur in India’s Maharashtra State, hosted a conference titled “The Revival of Buddhism in India and its impact on Buddhist Dynamics in South Asia” from 18–20 October. According to the Indian lunar calendar, 18 October marked the anniversaries of the conversions to Buddhism of Ashoka the Great (c. 304–232 BCE) and Dr. B. R. Ambedkar (1891–1956), with the former commemorated as Ashoka Vijaya Dashami. The day was therefore spent welcoming guests and making an evening pilgrimage to Deekshabhoomi, the site of Dr. Ambedkar’s conversion along with 600,000 members of the Dalit community.

Dr. Ambedkar chose to convert on 14 October 1956 (the lunar date being calculated as corresponding to Ashoka’s initiation as a Buddhist layman), launching what is today known as the Ambedkarite movement, which combines Buddhist teachings with an Indian vision of social justice, specifically anti-casteism and the restoration of the principles of the Indian constitution, which Dr. Ambedkar played a key role in formulating.

On 19–20 October, scholars from India and members of the Dalit community, from intellectuals and activists to Nagaloka alumni, gave speeches and held discussions about their social work and strategies in propagating the Dharma for the material and spiritual welfare of the diverse Dalit communities across India. In attendance were also Sri Lankan speakers, among them Ven. Ratana Thero MP and Harsha Navaratne, chairman of the Sevalanka Foundation. Dignitaries from Chinese Buddhist institutions, included Ven. Chong Hua of Chong Sheng Temple in Dali, Yunnan Province, and Ven. Ren Da and Ven. Miao Hai of Zhengjue Monastery in Zibo, Shandong Province. Attendees at the conference on 20 October. Image courtesy of the author

Topics explored at the conference included not just the Ambedkarite Buddhist movement but also Buddhism’s role in the positive development of India’s two major Buddhist-influenced neighbors, China and Sri Lanka. Dalit scholars and Nagaloka graduates shared how the Ambedkarite movement is spreading a message of peaceful social reform across India, building infrastructure and facilities for oppressed people, and pushing for egalitarian policies.

Prof. Mahesh Deokar, head of the Pali department at Savitribai Phule University in Pune, gave a speech about the significance of Dr. Ambedkar’s conversion to Buddhism to India. Mangesh Dahiwale, executive director of the Centre for Dalit Studies in Hyderabad, discussed the Ambedkarite aspects of democracy and social justice in the context of India and Asia. Dhammachari Maitriveer Nagarjuna of Nagaloka Institute gave a lecture on the dynamics of Ambedkarite Buddhism. Prof. S. R. Bodhi of the Tata Institute of Social Sciences, Mumbai, talked about the spreading influence of Ambedkarism among the non-Dalit Scheduled Castes.

Sri Lankan and Chinese guests shared their strategies for Dharmaduta work and possible intersections of theory and practice between Ambedkarite Buddhism and Chinese and Sri Lankan Buddhism, which could lead to further international dialogue. 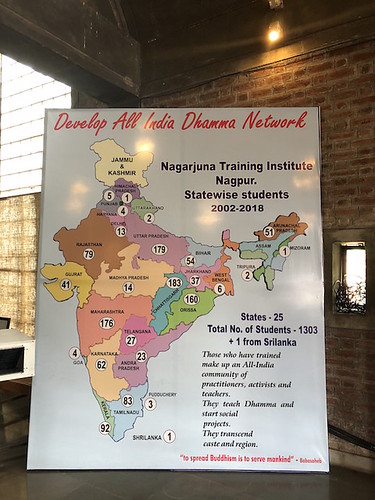 Triratna founder Sangharakshita first conceived of a spacious campus like Nagaloka in 1992, and since then British-born Dhammachari Lokamitra has carried on its mission. The first building constructed on the purchased plot of land, the Buddha Surya Vihara, was completed in 1997. The classroom, library, and residential facilities were completed in 2002, and in the same year the Nagarjuna Training Institute and its one-year Buddhism and Social Action training program were inaugurated. This unique program is a full-time residential course for 80–100 people. Students attend daily classes, participate in cultural activities, visit social projects in Nagpur, and learn meditation and the Dharma.

According to the Nagaloka Centre website: “Students come from many different states and caste communities all over India to develop their skills, confidence, and friendships. Having grown up in some of the most deprived and oppressed situations in the world, these young people often feel that the year of Dhamma practice and coursework completely transforms them and gives them a new vision of life.”

Between 2002 and 2018, the Nagarjuna Training Institute has developed an “All-India Dhamma Network” in the form of 1,303 students across India’s 25 states, including one Sri Lankan alumnus. These alumni “are active in their communities, teaching the Dhamma and establishing social projects.” (Nagaloka Centre) Monument to Dr. Ambedkar on the Nagaloka campus. Image courtesy of the author