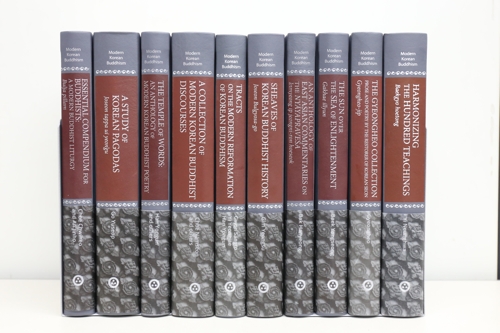 The English translations of the 10 works on Modern Korean Buddhism. From
yonhapnews.co.kr

The translation project attracted the attention of several Buddhist scholars and language specialists, among which David McCann, professor of Korean literature at Harvard University, and John Jorgenson, a specialist in Chinese, Japanese and Korean Seon (Zen) Buddhism and professor at La Trobe University, who helped with the translation of some of the works.

The works can be downloaded from the English website of the Jogye Order (at present only the first seven books are available and the other three will be available later), in a bid to promote Korean Buddhism abroad. In the words of the chairman of the Editorial Committee of the Modern Korea Buddhist Literature Project: "This project will help spread the Korean Buddhist culture to people all over the world." (The Korea Times)

Last year, the Jogye Order of Korean Buddhism signed a memorandum of understanding (MOU) with the Ministry of Culture, Sports and Tourism of the South Korean government to expand the overseas promotion of Korean Buddhism. A government official noted: "So far, Korean pop culture such as K-pop and K-dramas have been popular overseas but through this MOU we hope to introduce our traditional culture, thereby contributing to the diversification of the spread of Korean culture." (The Korea Times) In addition to the translation project, their joint efforts include inviting foreign dignitaries to South Korea to experience Korean Buddhism, temple stay programs, temple food exhibitions, performances, lectures, and hands-on activities both in Korea and at the 31 Korean Cultural Centers (KCC) located overseas. Venerable Seol Jeong during his inauguration speech. From yonhapnews.co.kr

The Jogye Order is a school of Seon Buddhism and South Korea’s largest Buddhist tradition, which traces its roots back 1,200 years to the Unified Silla (also known as the Later Silla) kingdom (668–935). The Jogye Order as a distinct entity emerged in the late 11th century when the monk Bojo Jinul, credited as the school’s founder, sought to combine the practices of Seon Buddhism with the theological underpinnings of sutra-based Buddhist schools, including Korean Pure Land Buddhism.

In recent years, the Jogye order has seen a dramatic decrease of the Buddhist population in South Korea (a decrease of 3 million). The renewed efforts to promote Korean Buddhism abroad might be about more than just the diversification of the “Korean wave.” A possible hope is that by riding the "Korean wave", there will be a renewed interest (albeit from foreigners) in Korean Buddhism. It will be one of the challenges facing the newly appointed chief executive of the Jogye Order, Venerable Seol Jeong, who began his four year term yesterday after being elected by the Jogye’s electoral college in October.

Jungmyungsa Buddhist Temple: A Haven of Korean Buddhism in Queens
Seon and the City