One of the Five Great Mountains of China,* Huashan, or Mount Hua, has historically been known as a place of retreat for Buddhist hermits and contemplatives from China’s other spiritual traditions, partly due to its relative inaccessibility and the precipitous nature of many of the climbs and narrow trails—indeed, the route up the mountain, which negotiates sheer cliffs and plunging ravines, has been described as one of the world’s most dangerous hikes.

This may go some way to explaining the draw the fabled mountain holds for Shandong-born artist Tian Xuesen, who has devoted himself to painting the majestic vistas of Huashan, and immersing himself in the mountain’s silent solitude. For more than seven years, Tian has painted nothing but Huashan, reveling in capturing the shifting colors, shapes, and moods of the moutainscape through the changing seasons and the shifting light between dawn and dusk.

The fortysomething painter spends most of each year living in elevated seclusion on Huashan, in China’s Shaanxi Province, some 120 kilometers east of the provincial capital Xi'an, finding there a refuge from the seething crowds and urban noise of modern China. “Here I paint, plough, and weed, seeking for the inner origin of life,” he said. (Sina English)

Having practiced Chinese brush painting as a young man, Tian was admitted to Shanghai University in 1997, where he studied oil painting. Five years later, he was a freelance painter in Shanghai, but was bored with his work, seeking but finding no fulfillment. “I was looking for a subject for my painting,” he recalled. “A subject that would be unique, worth a lifetime of devotion and something no one had painted before.” (ShanghaiDaily.com)

Tian has devoted the past seven years to capturing the shifting
colors, shapes, and moods of the Huashan moutainscape. From
shanghaidaily.com

In 2007, he bought a minivan and set out on a lonely journey in search of his muse that spanned the length and breadth of China. “[It] helped me to think about my life and my painting,” said Tian. “It’s not because I enjoy solitude or was brave to risk it going alone. I was looking for my life’s goal and was willing to sacrifice everything for that.” (ShanghaiDaily.com)

“After traveling for more than 40,000 km, I encountered Mount Hua in the autumn of 2008. I realized, at the first glance of the mountain, that all I had to face was only the mountain of ego in my life. I decided that I must come back sometime, stay and portray it exclusively.” (Sina English)

Back in Shanghai in 2010, Tian put his affairs in order, packed his remaining belongings into his van, and returned to Huashan. “The spring of 2011 finally saw me settling down deep in Mount Hua, giving up everything I have in Shanghai,” he recollected. (Sina English)

Though a popular tourist attraction, leisure hikers tend to congregate mainly along the most well-established trails. Huashan’s deeper secrets are available only to those with the determination and vision to look beneath the surface. “Deep inside the mountain it was all dense vegetation and silence from historical times. I live in an old adobe shack, opposite the main scenic view districts: the south peak, west peak, north peak and the cliff,” said the forty-something painter. “With no one to talk to, I am surrounded by silence for weeks in the mountain.” (Sina English, ShanghaiDaily.com) 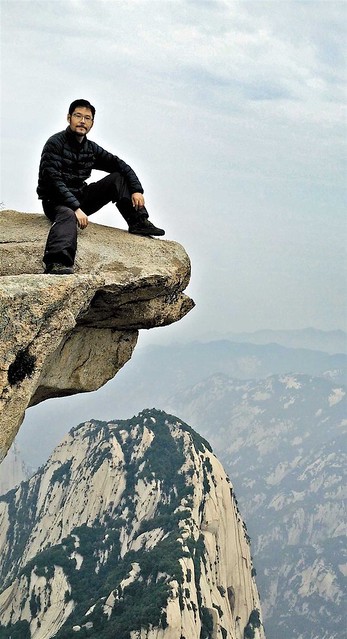 Tian expects to devote the rest of his life to painting
majestic Huashan. From hermitary.com

The years Tian has spent on Huashan have wrought subtle changes on him as a person and as an artist, which is reflected in his paintings. His early depictions of the mountain bear a visible tension, expressing power and strength, while in his more recent work, the eye that sees the mountain's peaks has adopted a gentler perspective. “Years of living alone in the mountain have taught me what to choose and what to give up,” said Tian. “I have chosen to give up city conveniences and embrace solitude and art.” (ShanghaiDaily.com)

Tian still return to the city from time to time, when necessary, to put his work up for exhibition. But he notes that the urban wilderness makes him uncomfortable, and time spent in tortuous traffic jams leaves him feeling dislocated. Afterwards, he always returns to Huashan.

“The mountain is and will be the sole subject of the rest of my life.” (ShanghaiDaily.com)

* The Five Great Mountains are arranged according to the five cardinal directions of Chinese geomancy:

Tapping a muse in the solitude of mountains (ShanghaiDaily.com)
Painter works in seclusion deep in the mountains (Sina English)

The Making of Buddhist Wood Sculptures in China
Buddhism in Contemporary China Through a Photographer’s Eye
An Illuminating Exhibition on the Transmission of Buddhist Art at the Palace Museum in Beijing
The Lion Hut of Empty Cloud
From the Gobi to the Getty: Buddhist Art from Dunhuang on View in Los Angeles