China has chosen the historical adventure-drama Xuan Zang as its entry for the foreign-language category at the 89th Academy Awards, to be held in February next year. The film epic, directed by Chinese film veteran Huo Jianqi and released in April this year, dramatizes the dramatic spiritual journey of the Buddhist monk, scholar, traveler, and translator Xuanzang from China to India during the early Tang dynasty (618–907).

Master Xuanzang (c. 602–64) is considered to be one of the most illustrious figures in Buddhist history, noted for translating numerous Buddhist scriptures from Sanskrit into Chinese and embarking on a 17-year overland journey from China to India, where he stayed for more than 13 years. His time in India included five years spent at the historic monastery and university of Nalanda, a great center of Buddhist learning, where he acquired knowledge of Sanskrit, Buddhist philosophy, and Indian thought. Upon his return to China in 645, Xuanzang retired to a monastery and devoted his energy to translating Buddhist texts until his death. According to his biography, he returned from India with “over 600 Mahayana and Hinayana texts, seven statues of the Buddha, and more than 100 sarira relics.”* 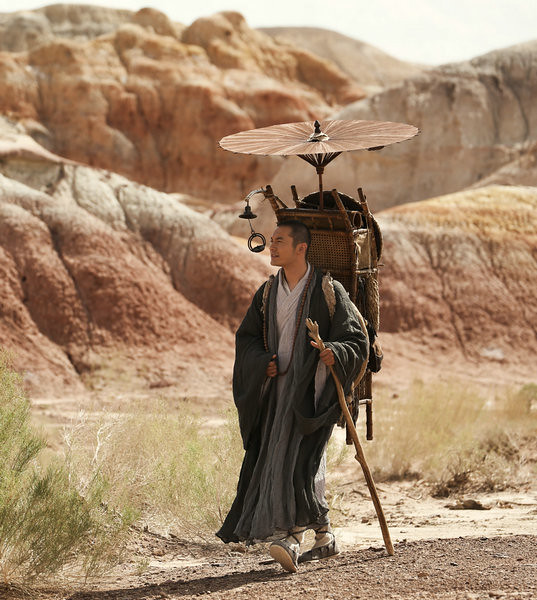 “The strong faith that compels him to seek the real answers of Buddhism supported Xuanzang to finish his dangerous journey,” said director Huo Jianqi. “I was pretty surprised to find that modern Indians are familiar with the name of Xuanzang. In the local textbooks for primary and middle school students, Xuanzang and his stories are featured.” (China Daily)

Retracing Xuanzang’s route through Central and South Asia, the film crew spent six months filming in China’s Gansu Province, Tibet Autonomous Region, and the remote deserts of Xinjiang Uyghur Autonomous Region, which Huo described as “torturous and challenging,” recalling: “The desert is very hot and dry. Most of the crew and cast suffered dehydration.” (China Daily)

Filming locations also included the ruins of the Nalanda monastery and university in the eastern Indian state of Bihar, where the Xuanzang spent years learning from renowned scholars and educators of the time.

“Most of the shoots were outdoors. It was physically taxing. In India, we spent 10 days in April and May and another 20 days in September. . . . The heat and the sun were all very challenging,” Huo recounted. (Hindustan Times)

Xuan Zang is also notable for being the first major feature film to be co-produced by China and India. The titular role is played by Chinese television and film heartthrob Huang Xiaoming, best known for playing the lead in the 2006 TV series The Return of the Condor Heroes. Award-winning Hong Kong director Wong Kar-wai (Chungking Express (1994), In the Mood for Love (2000)) provided art direction.

Xuangzang’s legacy was also the inspiration for the classic 16th century Chinese novel Journey to the West, attributed to the writer and poet Wu Cheng’en, which incorporated folk tales, mythology, and fictionalized adventures to the broad outline of Xuangzang’s own account. The novel has since been adapted and reinvented numerous times in the form of theatrical productions, films, television dramas, graphic novels, animated series, and video games.