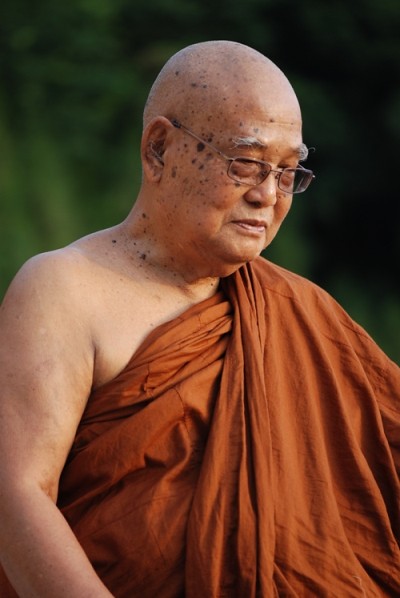 Sayadaw U Pandita. From From saraniya.com

Revered Burmese monk and influential vipassana meditation teacher Sayadaw U Pandita died on Saturday morning in Bangkok at the age of 94.

Sayadaw U Pandita had been hospitalized in Yangon since mid-March, but was transferred to a hospital in Bangkok for additional treatment two weeks before his death. The teacher’s disciples have prepared his remains to allow students and followers to pay their respects at Panditarama Shwe Taun Gon Sasana Yeiktha, the meditation center Sayadaw U Pandita established in Yangon in October 1990. On Wednesday his remains will be moved the Panditarama Hse Mine Gon Forest Meditation Center in Bago, some 50 miles northeast of Yangon. Funeral rites and cremation will take place on Friday, the seventh day of his passing.

Born on 29 July 1921, Sayadaw U Pandita trained in the Theravada Buddhist tradition from the age of 12, ordaining as a monk when he was 20. He was one of the foremost living teachers of vipassana meditation and a successor to the late monk and meditation master Mahasi Sayadaw U Sobhana (1904­–82). Both teachers played significant roles in popularizing vipassana meditation in the West and throughout Asia.

Vipassana, or insight meditation employs mindfulness of breathing, thoughts, and feelings, and contemplation of impermanence to gain insights into the true nature of reality, defined in Buddhism as the three marks of existence: impermanence (Skt. anitya), suffering or dissatisfaction (Skt. duhkha), and the realization of non-self (Skt. anatman).

Among the many Western teachers to study under Sayadaw U Pandita were Joseph Goldstein and Sharon Salzberg, founders of the Massachusetts-based non-profit Insight Meditation Society. Talks given by Sayadaw U Pandita at the Insight Meditation Society in 1984 were compiled and published in the book In This Very Life: Liberation Teachings of the Buddha. Sayadaw U Pandita was also a scholar of the Theravada Buddhist canon, the Tipitaka in Pali (Skt. Tripitaka), and was renowned for teaching a rigorous and precise method of self-examination, emphasizing a foundation of moral discipline (Skt. sila). He served as an advisor to retreat centers, monasteries, and Buddhist organizations in a number of countries, and regularly traveled to lead meditation retreats around the world. Possessing extensive knowledge of both the theory and practice of samatha and vipassana meditation, he continued to lead retreats and give Dharma talks until his health prevented his from doing so.