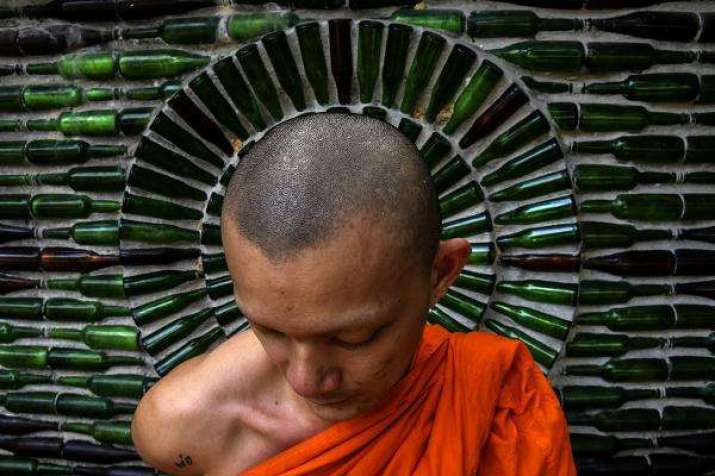 A monk in front of a glass bottle wall at Wat Charok Padang, Malaysia. Photo by Seth Akmal. From themalaysianinsight.com

Two Buddhist temple, Wat Pa Maha Chedi Kaew in Thailand and Wat Charok Padang in Malaysia, are constrcuted completely out of glass bottles and due to their unique aesthethic characteristics have become popular tourist destinations as well as unique examples of recycling waste.

Wat Pa Maha Chedi Kaew (also known as Wat Lan Kuad—the Temple of a Million Bottles), is located in Thailand’s northeasternern Sisaket Province, near the border with Cambodia. It is the first such Buddhist temple to use glass bottles as its main construction material.

The monks of Wat Pa Maha Chedi Kaew first started collecting beer bottles in 1984, and in the late 1990s they had collected so many bottles that they decided to use them as a building material. They have so far used more than 1.5 million recycled beer bottles to construct the 20 buildings that make up the temple complex, which consists of the main temple, a crematorium, a hall, prayer rooms, a water tower, tourist bathrooms, and several raised boudlings that function as living quarters for the monks. 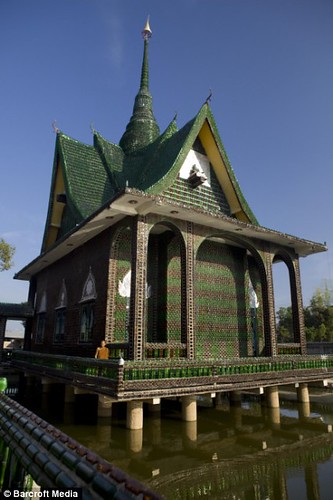 All of the buildings at Wat Pa Maha Chedi Kaew are made from a combination of concrete, which supports the underlying structure, and glass bottles. The green and brown structures have the appereance of large, three-dimensional mosaics, and form a pleasing contrast with the orange and yellow robes of the monks. The bottoles used in the temple come from just two brands of beer: the green bottles are from Heineken, while the brown bottles are from domestic beer producer Chang. The monks also recycle the metal bottle caps to make mosaics of the Buddha inside the buildings and continue to collect bottles to expand the temple complex. 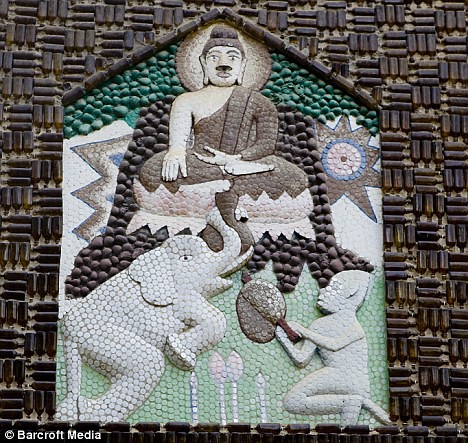 A mosaic of the Buddha made with beer bottle caps. From dailymail.co.uk

Wat Charok Padang, also known as the "Glass Bottle Temple," is located in the northwestern Malaysian state of  Kedah, close to the border with Thailand. Inspired by Wat Pa Maha Chedi Kaew, the chief monk of the temple, Datuk Phrcaathikan Nuemarutthammo Nuemchaiwan, adopted the idea of using a combination of bottles and cement to construct the main structures of the temple. Since the bottles are durable, cheap, and relatively easy to obtain, using them as a construction material offers a novel means of reducing glass bottle waste in the area. The initiative has drawn praise from the monastics and the local population alike. In 1999, Wat Charok Padang was constructed using 100,000 green and brown glass bottles, collected by the local villagers. The main difference with Wat Pa Maha Chedi Kaew is that the monastics in Malaysia used bottles from non-alcoholic beverages. A monk washes his hands at a bottle wall at Wat Charok Padang in Malaysia. Photo by Seth Akmal. From themalaysianinsight.com The glass bottle temple consists of a one-storey building that comprises 92 prayer bells, a fence that encloses the complex, and a nine-meter tall bottle-shaped building (of course made out of bottles). At the top of the bottle-shaped temple is a storage tank that can release water, which is believed to be able to wash away bad luck.

For these temples, glass bottles function as durable building material that is easy to clean, catches the light, and adds a striking aesthetic value to the temples that attracts many tourists. They are also unique examples of a more sustainable approach to consumption, and invite us to be more mindful of—and creative with—our waste. Reducing plastic pollution in the place of Buddha's Enlightenment
​Buddhistdoor View: Can Buddhists Take the Lead on Climate Change?