Korea’s Jogye Order has suspended temple stays across the country. From travel2next.com

The Cultural Corps of Korean Buddhism (CCKB), an affiliate of the Jogye Order of Korean Buddhism, South Korea’s largest Buddhist order, has suspended its “Templestay” program throughout the country following a sharp rise in the number of confirmed novel coronavirus (COVID-19) infections.

“As people’s concerns about the coronavirus rise due to the number of confirmed cases increasing day by day, we have inevitably decided to suspend our operations,” said Ven. Wonkyung, CCKB director and head monk. “We also ask all the Templestay operating staff and head Buddhist monks to pay more attention to preventing the spread of the infection and their health.” (The Korea Herald)

The Cultural Corps of Korean Buddhism was established in 2004 to promote Korean Buddhism and traditional Buddhist culture through cultural experience and education programs, exhibitions, and campaigns. Under the Templestay program, the organization enables laypeople to access 137 Buddhist temples in South Korea. In 2019, 70,520 foreigners were reported to have participated in the program.

COVID-19 is believed to have first spread from an illegal wildlife market in the central Chinese city of Wuhan, in Hubei Province. The World Health Organization has estimated the mortality rate from the virus at 2–5 per cent, with infants, the elderly, and people with underlying health conditions considered most at risk. Map of the COVID-19 outbreak in South Korea as of 29 February.
From wikipedia.org

Most of the confirmed infections in South Korea are from the country’s fourth-largest city Daegu, in southeastern Korea, which accounts for 3,081 cases, and 73 per cent of these have been linked to the Shincheonji Church of Jesus the Temple of the Tabernacle of the Testimony, a secretive fringe Christian group accused of being a religious cult. Members of the group are believed to have infected one another and others as they moved around the country.

The Korea Centers for Disease Control and Prevention (KCDC) has said that Shincheonji Church members visited Wuhan in January, and that an investigation is now underway to determine whether the trip played a role in the surge in infections in Korea. Shincheonji Church congregants are prohibited from wearing glasses and face masks during prayer services, which may have helped the virus spread, the authorities have said.

Earlier today, the Shincheonji Church’s controversial leader Lee Man-hee, 88, made a televised apology to the “government and the people,” and asked for forgiveness, noting that that the outbreak was “not intentional.” (BBC News)

Religious gatherings of all types have come under increased scrutiny as the Korean authorities work to contain the outbreak. The health authorities believe another cluster of cases originated at a church in the southern city of Busan, with other clusters linked to a group of Catholic pilgrims returning from Israel and the Myeongseong megachurch in Seoul.

Buddhist temples and Christian churches across Korea have since suspended regular ceremonies, services, and public events in response the outbreak, with many offering congregants online alternatives to traditional public ceremonies via social media channels. In Seoul, the Yoido Full Gospel Church streamed a sermon for its 560,000 followers on YouTube, filming a small choir instead using its usual 200 members and 60-person orchestra. South Korea’s Catholic Church has suspended Mass at more than 1,700 locations nationwide.

Prof. Francis Jae-ryong Song, who teaches sociology at Seoul’s Kyung Hee University, observed that many Korean Christians have an “evangelical mindset” and engage in group religious activities, including outreach programs to gain new converts, multiple times per week. The large-scale spread of the virus, Song said, may be attributable to the unwillingness of many people to reduce such activities. (Quartz) 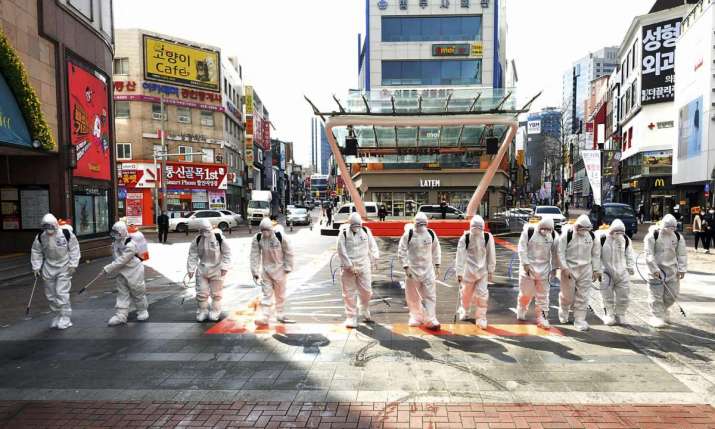 Soldiers spray disinfectant in Daegu, a stronghold of the Shincheonji Church linked to a large number of virus infections in South Korea. Photo by Lee Moo-ryul. From theguardian.com

Buddhist organizations have canceled all public gatherings, events, and services, including educational programs and visits to sacred sites. Mountain temples have also been temporarily closed to the public. The Jogye Order has ordered temples across the country to cancel large group events.*