Buddhist Temple in Japan Opens its Doors to Cosplaying Visitors A 700-year-old Buddhist temple in Japan’s Hyogo Prefecture has taken a novel tack in engaging with the younger generation by opening its doors to fans of anime and video games who share a fondness for dressing up in elaborate costumes.

The Japan News reports that aficionados of anime and video games that feature characters and notable figures from Japanese history have become regular visitors to Daikoku-ji, in a mountainous area of Sasayama City, where they enjoy being photographed in the costumes of their favorite characters amid the atmospheric backdrop of the historic temple.

Daikoku-ji is believed to have been founded by a hermit around 645–650, during Japan’s Asuka period (538–710), notable for being a time of significant artistic, social, and political change brought about by the arrival of Buddhism to Japan from China. The temple’s main hall, a melding of Chinese and Japanese architecture styles, was built some 700 years ago using the most advanced building techniques of the period. The government has designated both the main hall and the temple’s five Buddhist statues as cultural properties of national significance.

“The [temple’s] historic buildings are perfect with our costumes,” said a female visitor to the temple who had transformed herself into the famed samurai warrior Okita Soji, both an historical figure and a character featured in a popular mobile game. “It feels amazing to have a photo session in this rich, natural environment.” (The Japan News) 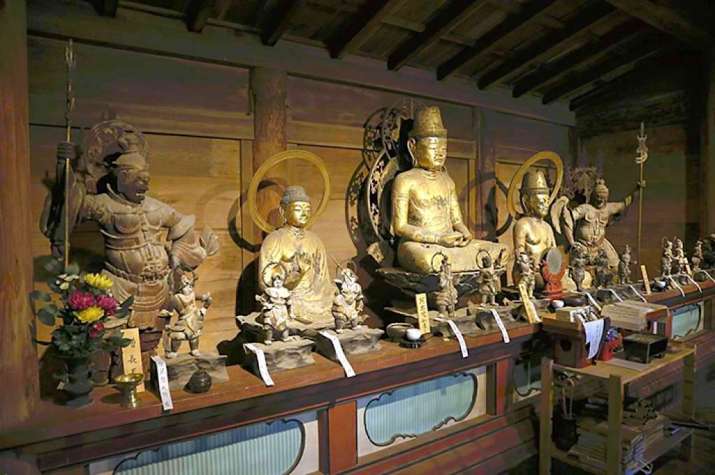 Five Buddhist statues at Daikoku-ji have been designated as important cultural properties by the Japanese government. From lmtonline.com

Daikoku-ji first made its grounds available as photo location in 2010, after the temple’s head monk, 53-year-old Yuen Sakai, received a request to host a cosplay project from a video production company based in Osaka. After the project was allowed to go ahead, the news quickly spread and the temple received more requests for similar visits.

The temple has turned the trend into an additional source of income to help cover its operating costs and has even invested in lighting equipment and smoke machines for its costumed visitors. A daytime cosplay photoshoot can be booked for 1,500 yen (US$14), while an evening booking costs 2,000 yen (US$18), and a full-day photo pass costs 3,000 yen (US$27), all of which must arranged in advance.

While the idea of an ancient Buddhist temple building ties with pop culture might be a anathema to some, local residents have expressed support for the initiative, saying it has helped the temple reach out to younger visitors at a time when attendance and Buddhist temples in japan is reaching an all-time low.

“This is an amazing example of coexistence between a religious site and a contemporary hobby,” said Shinya Hashizume, a professor at Osaka Prefecture University and an authority on contemporary subcultures. “The temple is nothing less than a sacred site for cosplayers.” (Inquirer.net) Visitors stroll through the grounds of Daikoku-ji. From lmtonline.com

Although about 75 per cent of Japan’s 127 million people identify as Buddhist, most seldom see the inside of a temple except for during traditional ceremonies to mark the new year and funerals for deceased family members. Some 27,000 of the country’s 77,000 Buddhist temples are forecast to close over the next 25 years, reflecting shrinking populations in small rural communities and a loss of faith in organized religion among the country’s population as a whole. A survey carried out in 2015 by The Asahi Shimbun newspaper indicated that 12,065 Buddhist temples in Japan were without resident monks, representing 16 per cent of temples affiliated with the 10 most popular schools of Buddhism in the country. The survey also found that 434 temples from nine major denominations had closed completely in the past decade.*

The temple’s head priest Sakai said that allowing cosplayers to become regular visitors might have a positive side effect “if it attracts young people to the temple,” noting that most regular visitors from the temple’s local community were aging and there were few newcomers among the congregation. “I believe our Buddha also finds it interesting,” he added. (The Japan News)

A place to pray, and cosplay: Temple in Hyogo Prefecture opens up to anime and video game subculture (The Japan News)
Japanese Temple welcomes cosplayers for photoshoots (Inquirer.net)

Senso-ji: A Buddhist Temple for the People
Why Meditate?
The Buddhist Roots of Japanese Flower Arrangement
Spirituality as the Transformation of Daily Life: Living Buddhism in 21st Century Japan