Buddhist Pagoda in China’s Sichuan Province Burns to the Ground A 15-floor pagoda at a Buddhist temple in China’s southwestern Sichuan Province burned to the ground on Sunday afternoon along with two nearby halls. The cause of the inferno is under investigation. No casualties were reported.

The tower, described by the China Daily as the tallest wooden pagoda in Asia, is part of a larger complex at Jiulong Temple in the city of Mianzhu, which was heavily damaged during the 2008 Sichuan earthquake. 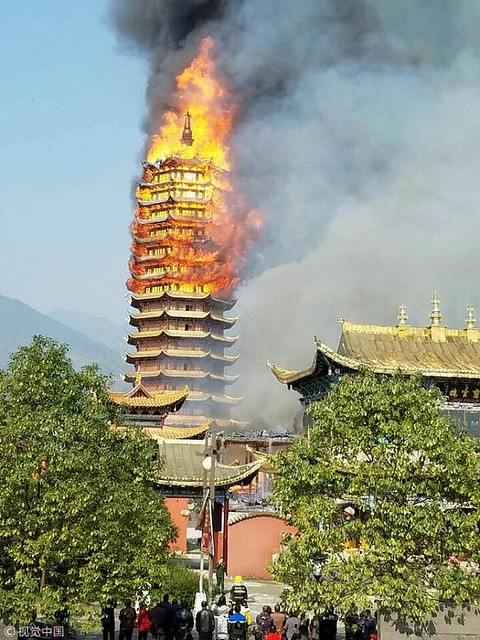 The temple complex, which dates to the Ming dynasty (1368–1644), was in the process of being restored after it was destroyed in the magnitude 8 earthquake that devastated the region in 2008.

Media reports said it took four hours to bring the blaze under control, although the structure could not be saved. Video footage and photos posted on social media showed the building engulfed in column of fire and smoke. According to witnesses, the fire began in one of the temple’s halls before spreading to the other two buildings.

“The fire started at the Great Buddha Hall and spread to the Jade Emperor Hall,” said witness Yu Guixiang. “Then the wind was blowing and the pagoda was also on fire.” (ABC) An aerial view of the temple complex before the fire. From chinadaily.com.cn

Looking for the Pure Land: A Visit to Xuanzhong Monastery
Sacred Stupas and Precious Pagodas: The Many Roles of Reliquaries in the Buddhist Landscape