A woman holds candles as she prays at a Buddhist temple in Badachu Park, Beijing. From pinterest.com

Buddhists across the globe have gathered to mark the Lunar New Year in recent days, from Hong Kong to Houston, and Sydney to Singapore, festivities and Buddhist rituals were observed and shared across Chinese, Korean, Tibetan, and Vietnamese communities, and more.

In China, celebrations were quieter than usual after the authorities extended a ban on fireworks to more than 400 cities across the country, including Beijing, in a bid to reduce chronic air pollution, although the initiative did little to dampen enthusiasm for other traditional practices and family and community gatherings.

“The traditional culture represents ancient people’s aspiration for a good life,” said 33-year-old Peng Lei, who brought his daughter to Beijing’s Ditan Park temple fair. “I want my daughter to see with her own eyes and get to know the root of our culture.” (XinhuaNet)

To welcome the year of the Earth Dog, Wanfo, a Buddhist temple in Shanghai, launched a charity program to receive children of migrant workers who continued to work in the city over the holiday period. “We have learned that most children of the migrant workers are left behind in their hometowns, and they wish to come and see Shanghai with their parents,” said the temple’s Master Hong Yi. (XinhuaNet) 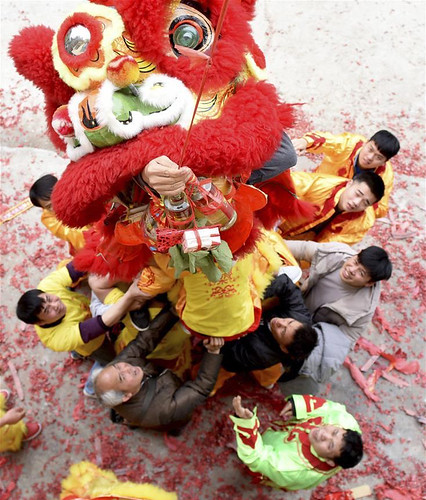 Ethnic Chinese in Indonesia light incense sticks during celebrations at a temple in Jakarta. From trtwold.com

It gives me great pleasure to take this opportunity to wish the Chinese community in Singapore a happy and prosperous Lunar New Year. We are truly blessed with the gift of peace, prosperity and strong friendship bonds between people of all faith communities and ethnic groups in Singapore. (Today)

Acknowledging efforts by community leaders in Singapore to ensure a “state of good social cohesion and relations,” Dr. Fatris noted that an interfaith group of young Singaporeans had recently toured Buddhist, Christian, and Islamic places of worship as part of the United Nations’ World Interfaith Harmony Week.

Canada’s Prime Minister Justin Trudeau visited the Fo Guang Shan Buddhist Temple in Mississauga, Ontario, on 15 February to help welcome the Year of the Dog, participating in a Buddhist prayer service before briefly touring the Lunar New Year Fair being prepared on the temple’s lower floor, where he received a gift of Canada-themed Buddhist art.

Likewise in South Africa, the grounds of Nan Hua Buddhist Temple in the town of Bronkhorstspruit hosted throngs of visitors, marking the lunar year with firecrackers and traditional cultural displays. Inside the temple, people made candle offerings and received a brief history of Chinese culture and heritage. The country is home to the largest population of overseas Chinese in Africa. Canadian Prime Minister Justin Trudeau takes part in a New Year prayer service at the Fo Guang Shan Temple during a visit to Mississauga. From mississauga.com Amid the annual festivities in New York City, devotees waited in long lines to enter the American Society of Buddhist Studies temple to make offerings of incense and fruit. In the basement, volunteers cooked and distributed vegetarian meals for the thousands of visitors. A Buddhist nun who has worked in the temple for nearly 10 years said preparations for celebration had taken three or four days. “We clean up the whole temple and finish it when we’re doing the Chinese New Year,” she said. (Daily News)

Similar crowds could be seen in Australian urban centers, with thousands flocking to the Nan Tien Temple in Berkeley, New South Wales, on Friday, to attend lunchtime cultural performances. The temple’s Ven. Miao You observed that “Venerable Master Hsing Yun has dedicated these words to welcome the Year of the Dog: ‘the legacy of loyalty and honor.’” (Illawarra Mercury)

The biggest Chinese New Year celebrations outside of Asia were held in central London, where tens of thousands lined the streets to enjoy cultural displays in Chinatown and nearby Trafalgar Square, including martial arts exhibitions, and traditional lion and dragon dances. Thousands of visitors to the American Society of Buddhist Studies in Chinatown left offerings of incense and fruit. From nydailynews.com A dragon is paraded though the streets of London as part of the Chinese New Year celebrations. Photo from AFP

Celebrations for Losar, the traditional Tibetan New Year, which this year coincided with Chinese New Year, were also underway around the world.

In Dharamsala, northern India, Buddhist monks and officials of the Tibetan diaspora gathered at the main temple in McLeod Ganj, Tsuglagkhang, early on Friday morning to lead a prayer ceremony. The local Tibetan community also gathered to offer prayers and receive blessings.

Russian president Vladimir Putin offered a message of congratulations to his country’s Buddhists, published on the Kremlin website:

It is important that Russia’s Buddhist community is preserving carefully the invaluable ethic and spiritual heritage and self-identical traditions of its ancestors and that it pays relentless attention to the highly demanded educational and charity activities, cares for family values and the upbringing of younger generations, promotes inter-religious and inter-ethnic dialogue, as well as the consolidation of peace and concord in society. (TASS)

Russia is home to some 900,000 Buddhists, most of whom live in the federal republics of Kalmykia, Buryatia, and Tuva and are followers of the Vajrayana tradition. A cleansing ritual is conducted for Losar at Ivolginsky Datsan, a Buddhist temple in Buryatia. From tass.com Tibetan Buddhist monks in Dharamsala during the Losar celebrations. From tribuneindia.com

Loga Yangchen, a Tibetan restaurant owner in Toronto, Canada, noted that making a Buddhist shrine to bless family members was as important aspect of Losar. “Every family will have a different altar and prepare different foods for Losar,” he explained. “The most important offering is the one from the heart.” (thestar.com)

His Holiness the Karmapa observed Losar in the United States for the first time, leading traditional rituals and practices in the shrine hall of Karma Triyana Dharmachakra in Woodstock, New York. In a New Year message he shared:

On this first day of the Tibetan Year of the Earth Dog, Losar Tashi Delek to everyone, especially my brothers and sisters in Tibet and members of the Tibetan and Himalayan communities outside Tibet. His Holiness the Karmapa leads Losar observations in Woodstock, New York. From kagyuoffice.org