An 8.5 centimeter statue of an arhat bearing an alms bowl and standing beside a dragon, carved from agalmatolite. From livescience.com An 8.2 centimeter statue of an arhat beside a tiger, carved from agalmatolite. From livescience.com

A Yuan dynasty (1271–1368) shipwreck, discovered preserved in the silt and mud of a dried up riverbed in eastern China after more than 700 years, has revealed a trove of ancient treasures, including a Buddhist shrine and other Buddhist artifacts, a recently published report by archaeologists revealed.

Dating back to a time when the Mongol Empire ruled a large part of present-day China, archeologists from the Shandong Institute of Cultural Relics and Archaeology believe the 21-meter wooden ship was used for journeys along the Yellow River until it was involved in a collision, took on water, and sank before submerging in the soft mud of the riverbed. The remains of the vessel were uncovered at a construction site.

The 21-meter wooden ship has 12 cabins, separated by bulkheads. From livescience.com

The ship’s hull is divided by bulkheads into 12 compartments that include the captain’s cabin, quarters for the crew, cargo storage, and a control room that was also used as a kitchen. The ship also had a dedicated Buddhist shrine room, from which the archaeologists recovered an incense burner and sculptures of arhats,* more than 8 centimeters in height and carved from agalmatolite, depicted sitting beside a dragon and a tiger.

Altogether, “more than 100 artifacts were unearthed from both inside the shipwreck and its surrounding area, including artifacts of porcelain, pottery, lacquerware, jade, stone, iron, bronze and gold,” the archaeologists wrote in a paper published recently in the journal Chinese Cultural Relics. 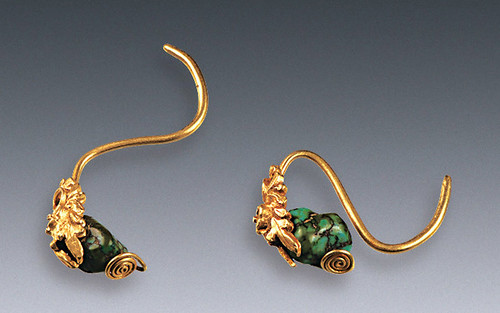 Gold and turquoise jewelry, believed to be earrings. From livescience.com

“Porcelain ewers [a type of jug], net sinkers, scissors, oil lamps, and bronze mirrors,” were discovered in the the crew quarters, the archaeologists recorded, adding that lacquerware was found in the captain’s cabin, and even grain remained in the cargo hold.

The ship’s bridge contained an assortment of kitchenware, including an iron stove, an iron pot, an iron ladle, and a wooden cutting board. The vessel’s steering system was also well preserved, including the tiller just above the bridge on the main deck and the ship’s rudder. 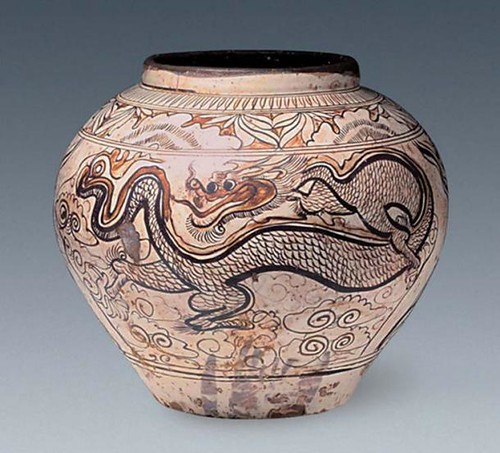 Artifacts recovered include this jar decorated with a dragon and phoenix design.
From ancient-origins.net

Other notable discoveries include gold and turquoise jewelry, a colorful jar decorated with dragon and phoenix motifs, and a white porcelain vase, 42.5 centimeters high, with a well-preserved dragon design. 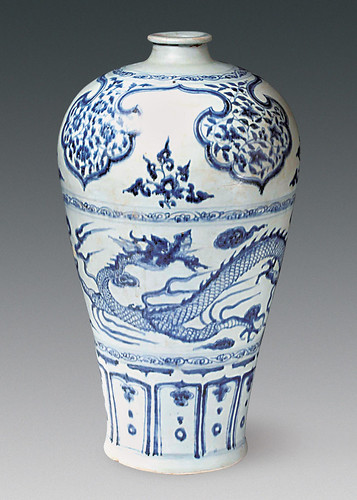 A 42.5-centimeter porcelain vase with a dragon motif was
also found. From livescience.com

“During a relatively short period of time after the accident, the silt beneath the shipwreck was washed away by the current, [and] the shipwreck continued to sink to 1–2 meters below the original riverbed, then stabilized at its current location. Silt and mud were then deposited over it, and the shipwreck was completely buried," the archaeologists noted.

“The deposits around the shipwreck and the cracking of its [hull] suggest the possibility that the ship sank after its hull was hit and the ship wrecked,” the researchers observed. No human remains were found in the vessel. 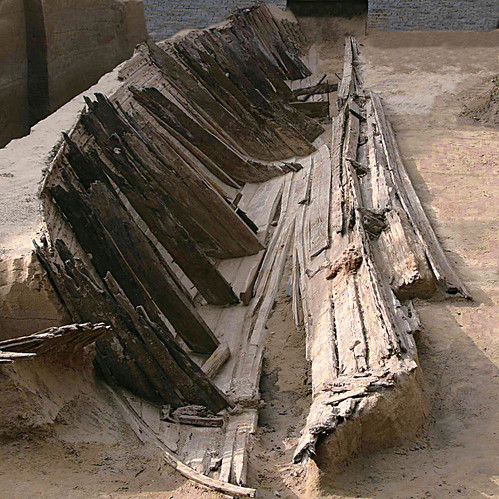 Cracks in the hull of the ship suggest it was was involved in a collision and sunk.
From livescience.com

The Yuan dynasty established by Kublai Khan, leader of the Mongolian Borjigin clan, ruled vast territories including what is now northern China for several decades, before the conquest was completed in 1279. Khan’s empire controlled most of present-day China and its surrounding areas, including modern Mongolia, lasting until 1368.

* A perfected person who has attained insight into the true nature of existence.

The Smithsonian Offers an Innovative Encounter with Buddhism
LTWA Plans to Relocate Thousands of Ancient Tibetan Buddhist Manuscripts to New Conservation Center
Ancient Buddhist Scriptures Found Inside Amitabha Statue in South Korea
135-year-old Buddhist Temple in Shanghai is on the Move
1,800-year-old Buddhist Carvings in Lianyungang Bridge the Past and Future of the Silk Road
600-year-old Buddha Statue Emerges from Chinese Reservoir