Organic buildings designed by 24H Architects on the campus. From archdaily.com

Panyaden International School in the northern Thai city of Chiang Mai, is constructed entirely out of earth and bamboo. The inspiration behind the school's buildings is drawn from nature, and the earth-and-bamboo structures are designed with a profound respect for nature and the Buddhist values that also inform the curriculum of the school.

Founded in 2011, the school is situated in the middle of rice fields, 15 minutes south of Thailand's second-largest city. The 5,000-square-meter campus houses a variety of buildings all made from natural building materials. The campus houses two main types of buildings: those that house the classrooms—with adobe (mudbrick) and rammed earth walls, and glass windows made from recycled bottles and washing machine windows—and pavilion buildings constructed out of bamboo. All of the buildings are designed to resemble birds and leaves, having been inspired by elements of nature. Even the layout of the campus is based on the local flora: the various buildings and pavilions were originally designed to be organized along a structure of roads based on the shape of the tropical antler horn fern. The campus has since evolved, but all new additions continue to follow the same design ethos.

The original design was created by 24H Architecture, a firm from the Netherlands. Subsequent  buildings added to the campus later were designed and constructed by Chiangmai Life Architects and Construction (CLAC), which is also been responsible for the latest addition to the school: a large sports hall completely built with bamboo. The sports hall of Panyaden International School. From designboom.com The sports hall can accomodate up to 300 people. From designboom.com

CLAC specializes in modern bamboo-and-earth architecture, so when the firm was approached to build the sports hall, they opted to construct the entire hall out of bamboo, a sturdy (even in a city as densely populated and constructed as Hong Kong, construction companies still prefer bamboo scaffolding over the metal scaffolding one would find in Europe and the US) and locally abundant building material.

According to CLAC: “The brief was to build a hall that should be big enough to hold the projected capacity of 300 students, but still smoothly integrate with the previous earthen and bamboo buildings of the school, as well as the natural hilly landscape of the area. It should provide modern sports facilities and use only bamboo to maintain the low carbon footprint and the Green School mission of Panyaden.” (Lonely Planet)

What resulted was the school’s new 782-square-metre hall that houses courts for badminton, basketball, volleyball, and futsal, but does not disrupt the landscape. Due to the way the 17-meter-long bamboo trusses were woven together, no metal supportive reinforcements were needed, but according to the architect, the structure should be able to last up to 50 years and be able to withstand storms and earthquakes: “The hall was designed with the help of two independent engineers to modern safety standards of loads, and to withstand the local high-speed winds, earthquakes and all other natural forces.” (Lonely Planet) The sports hall from above. From designboom.com A side view of the sports hall. From dezeen.com

Openings in the roof and the open walls allow for natural light to enter the hall and also work as a natural air-conditioning system; “The design and material enable a cool and pleasant climate all year round through natural ventilation and insulation. At the same time, the exposed bamboo structure is a feast to the eye and an exhibition of masterly handicraft.” (Lonely Planet)

Panyaden International School, is a private bilingual primary school (and pre-school) that accommodates 375 students, including 10–20 per cent of local Thai children, with a curriculum and education approach based on Buddhist principles and a profound respect for nature. The school hopes that the students will function as ambassadors of green living for their respective communities, and requested that the sports hall function as an example of environmentally mindful living. As a result, CLAC used borax salt instead of chemicals to treat the bamboo used for construction. The architects also note that the bamboo absorbed more carbon than was emitted during the transportation of the building materials and the construction itself, meaning that the project has a zero-carbon footprint. 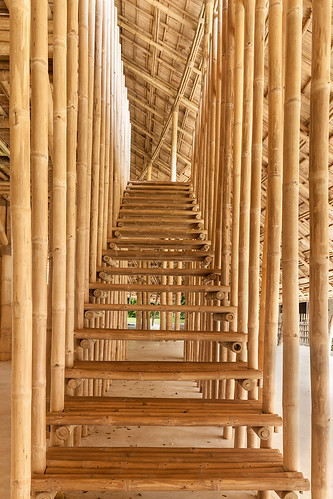 Bamboo staircase in the sports hall. From
designboom.com

The design of the hall also resonates with some of the school’s Buddhist ethics: “The design was based on the lotus flower, as Panyaden International School is in Thailand and uses Buddhist teachings to infuse values into its academic curriculum, and teach the underlying mechanisms of the human mind.”  While one can recognize the resemblance to a lotus bud in the design of the hall, the image of the bamboo structure with the sunlight filtering through is definitely awe inspiring. (Lonely Planet)