Meeting wellwishers during a royal visit to Birkenhead in Merseyside, England, on 14 January, Britain’s Prince Harry reportedly shared with 69-year-old Buddhist monk Kelsang Sonam that he meditates every day. Following their conversation, Kelsang Sonam presented the prince a copy of the book Eight Steps to Happiness: The Buddhist Way of Loving Kindness by the Tibetan Dharma teacher Kelsang Gyatso.

Prince Harry and his wife, American former actress and humanitarian Meghan Markle, visited a community café and supermarket called Number 7 selling discounted food for low-income families, operated by Feeding Birkenhead, a coalition of organisations “working together to eliminate hunger” in the local community. During the visit, the couple had the chance to sit with some of the organization’s staff and customers, which is when the prince and Kelsang Sonam spoke.

The Daily Mail tabloid’s correspondent Rebecca English tweeted about their conversion: “Random fact of the day: a 69-year-old Buddhist monk named Kelsang Sonam, who gave Harry a copy of a book titled “Eight Steps to Happiness,” said the prince told him he meditates every day.” (Rebecca English Twitter) 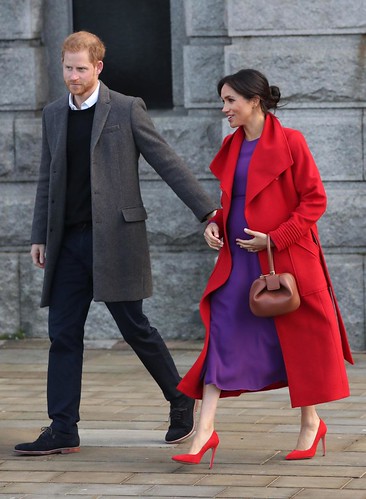 Markle might have introduced her husband to meditation. Prior to marrying the prince, Markle practice meditation daily and the practice continued as she made the transition to royal life. Years before her royal engagement, Light Watkins, an American meditation teacher, taught her the mindfulness practice, which she quickly adopted into her wellbeing routine.

“I met Meghan through a mutual friend of ours about five years ago,” Light Watkins told women’s fashion magazine InStyle. “This friend of ours is in the wellness space and I think she had been working on some diet stuff with him. She’d been obviously familiar with the practice [of meditation] and had been doing it on her own and she was really intrigued by the fact that I was a meditation teacher and I do these trainings.”

Markle wrote about her experience with meditation in a 2015 post on her former lifestyle blog The Tig: “Last week marked the one-year anniversary of my relationship with meditation, something I found endlessly daunting at first (the thoughts, the distractions, the boredom of it), but soon became the quietude that rocked my world.” (The Tig)

“I can’t put my finger on the why or the how, but I will tell you this much, for me . . . I am just happier. And meditation has much to do with that . . . I urge you to give it a shot. The worst thing that can happen is that you gave yourself 10 minutes of quiet in an endlessly loud world. Shhhhh . . . it feels good.” (The Tig)

Markle, and reportedly Prince Harry, practice mindfulness meditation, an ancient technique found in many contemplative spiritual traditions, including Buddhism. Mindfulness meditation has been rapidly growing in popularity among modern physiologists, neurologists, and physicians, and many recent studies demonstrate that even secular versions of the practice offer numerous well-being benefits, such as stress reduction, deep relaxation, and more positive states of mind.

Rebecca English Twitter
Introduction to Meditation (The Tig)
Prince Harry tells Buddhist monk he meditates ‘every day’ during visit to Merseyside with Meghan Markle (The Sun)
Does Prince Harry Meditate? The Duke Of Sussex Just Revealed His Wellness Routine (Bustle)
Prince Harry Has a Cute New Hobby and I'd Bet Literal Money It's Inspired by Meghan Markle (Cosmopolitan)
Meghan Markle Is Using This Centuries-Old Stress Relieving Tool to Prepare for Her Wedding (InStyle)

Contemplative Practices: Helping Children Enjoy Meditation
The Daily Practice of a Modern Chinese Buddhist Nun: Facing the Discomfort
The Revival of Meditation in China: A Seven-day Retreat at Yuquan Monastery