Bodhisattva Statue at Kyoto Temple May Be 1,000 Years Older than Previously Thought

Historians believe that a Buddhist statue kept at a small, 400-year-old Buddhist temple in the former Japanese capital of Kyoto may in fact be a priceless historical artifact that is some 1,000 years older than previously thought.

The 50-centimeter-tall metal sculpture of a seated bodhisattva known as “Hanka Shiizo”—the main statue at the neighborhood temple Myoden-ji in Kyoto’s Sakyo Ward—was originally believed to be about the same age as the temple, which dates to 1616, during Japan’s Edo period. The Edo period  (1603–1868), which was characterized by economic growth, a complex and strictly defined social structure, isolationist foreign policies, and active cultivation of artistic and intellectual pursuits. 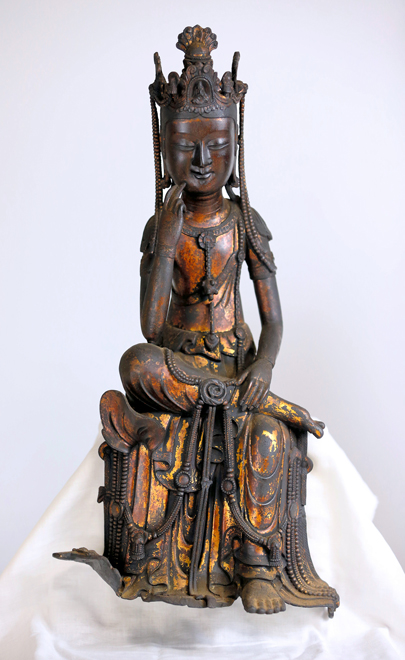 “The decoration is very detailed and the Korean Peninsula is very likely where it came from,” said Yutaka Fujioka, 54, a professor of Oriental art history at Osaka University, who announced his discovery on 13 January. “This makes it a very valuable Buddhist statue.” (The Asahi Shimbun)

Professor Fujioka, 54, said the statue was most likely made on the Korean Peninsula during the 7th century before finding its way to Japan with the eastward spread of Buddhism across Asia. He noted that it was extremely rare to find examples of such sculptures in Japan. Prof. Fujioka and his team of historians have to date examined some 400 ancient Buddhist statues in China, Japan, and South Korea. 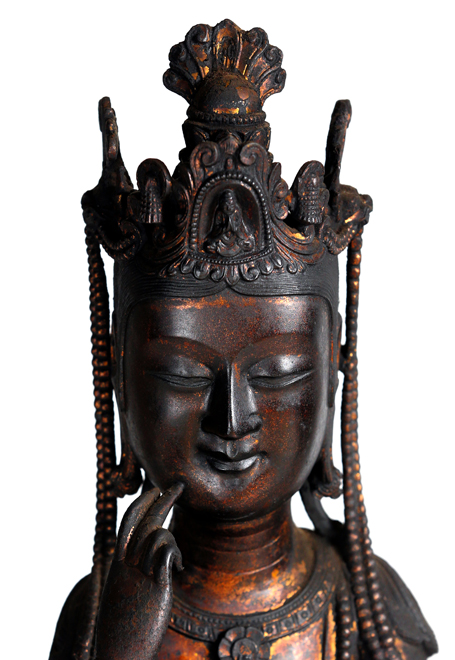 The statue's headdress matches similar artifacts produced on the Korean
Peninsula between the 6th and 7th centuries. Photo by Yoshiko Sato.
From asahi.com

The seated bodhisattva, depicted with its right leg lying across the left thigh, and with one hand resting against the chin as if in deep contemplation, bears several features in common with similar artifacts produced on the Korean Peninsula between the 6th and 7th centuries, including the figure’s headdress and horizontal carved hairline. The depiction of a finely worked dragon motif on the leg of the Buddhist statue is also characteristic of other works created in Korea during this period.

An X-ray fluorescence analysis revealed the composition of the sculpture to be 86 per cent copper and about 10 per cent tin—a higher level of tin than normally found in statues from Japan and China and also pointing to artifact’s Korean origins. The dragon motif on the leg of the statue is characteristic of similar artifacts from ancient Korea. Photo by Yoshiko Sato. From asahi.com

In light of the revelation of the sculpture’s value, the monastics at Myoden-ji have decided to store the statue at a museum for safekeeping. In its place, the temple will rely on a replica of the ancient artifact made with 3D printer. Myoden-ji is a Nichiren Buddhist temple founded by the monk Nichii, who converted from the Tendai school to Nichiren.