Tim, a well-known former stray, who was rescued by a tourist. Photo by Palden Tshewang. From pri.org

Perhaps best known for prioritizing Gross National Happiness over the acquisitiveness of economic growth and as one of the Earth’s rare but essential carbon sinks,* the Buddhist kingdom of Bhutan, nestled in the rarified air of the eastern Himalayas, has another, perhaps less widely admired reputation as home to a large population of stray dogs. While dogs have traditionally played an important role in day-to-day Bhutanese life, helping yak herders protect their cattle and guarding farms from strangers and wild animals, with increasing urbanization, these hardy canines have had to adapt to a new way of life.

The population of stray dogs living in Bhutan’s cities has grown rapidly as the country has become more developed. As a Buddhist country, the sale of meat is subject to government restrictions, but there is a black market, especially during the tourist season, and stray dogs thrive on waste meat that is not disposed of properly. By the mid-2000s, aggressive packs of dogs were becoming a menace on city streets, so the government decided to reach out to Humane Society International (HSI) for help in controlling its burgeoning canine population.

The HSI proposed an innovative yet humane program of population control by capturing dogs, neutering them and vaccinating them against rabies, and then returning them to their home streets. When the program was launched in 2009, there were an estimated 100,000 stray dogs in Bhutan, largely concentrated in urban centers, compared with the kingdom’s human population of roughly 750,000. Seven years on, some 71,000 street dogs have been spayed or neutered and given rabies vaccines. 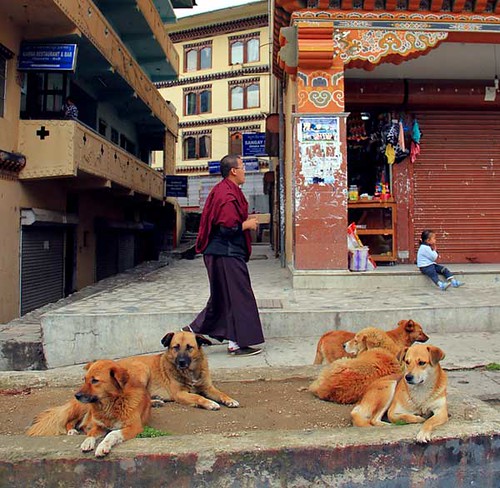 As is common in many Asian countries, dog ownership is a somewhat amorphous concept in Bhutan, where they generally live outside in their own social groups while still being cared for by local communities. “They’re really community dogs. There isn’t a lot of individual pet ownership,” said animal rights activist Twig Mowatt. “But there are dogs that are loyal to a certain territory. There might be seven or eight that live on a certain block and then the people who live in that area feed the dog[s]. So they do care for the dogs. They don’t want to hurt them. They believe that would be bad karma for them.” (PRI)

The HSI program is designed not only to limit the dog population in a humane manner, but also to help people and dogs live alongside each other more comfortably. “Eventually over the next [few] years the population will come down to a level where these dogs will start being valued by the community because they are not that common any more and they are not a nuisance any more,” said Rahul Sehgal, HSI’s Asia director. (Dogster)

Founded in 1991, HSI is the international division of The Humane Society of the United States (HSUS). The organization has expanded The HSUS's activities into Africa, Australia, Asia, Central and South America, and Europe, where it carries out field activities and programs.

At the beginning of the program, progress was hampered by a shortage of veterinarians in Bhutan, so HSI initially deployed veterinary teams from India. Subsequently, more than 30 Bhutanese underwent extensive veterinary training in India, and received further training in Bhutan from HSI in catch-neuter-vaccinate-release (CNVR) techniques, passing on their new skills to their Bhutanese colleagues. The program, which is ongoing, is now entirely run by the Bhutanese. The dog management team in the city of Paro includes two vets (in green scrubs), vet techs, and dog catchers. Photo by Palden Tshewang. From pri.org

“The way you can recognize a dog that’s been spayed or neutered is they take a little triangular notch out of its left ear,” said Mowatt. “And I have to say, everywhere I went, I would hike up to some monastery in the hills or trekking along the rice paddies and every single dog I saw had this triangular notch.” (PRI)

Almost 75 per cent of Bhutanese identify as Buddhists, according to data for 2010 from the Washington, DC-based Pew Research Center, with Hinduism accounting for the majority of the remainder. Most of Bhutan’s Buddhists follow either the Drukpa Kagyu or the Nyingma school of Vajrayana Buddhism.

* Bhutan’s high level of forest cover means that not only has the kingdom met its pledge to remain carbon neutral, it is one of the Earth’s rare but essential carbon sinks, with its forests absorbing more carbon dioxide than the country produces.