Tara Choying Lhamo, an Austrian Buddhist who has been living in retreat for more than 20 years—12 of which were spend in Milarepa’s caves in Lapchi, Nepal—is now sharing her unique experience and insights with audiences in Australia and New Zealand.

The Otago Daily Times reports that Lhamo is now in New Zealand, following a 10-day tour of Australia. Last year, Lhamo shared her meditation experiences for the first time with an audience in London. Those who heard her story were deeply moved.

Lhamo is a student of His Holiness Chetsang Rinpoche and Garchen Rinpoche—both masters of the Drikung Kagyu lineage of Tibetan Buddhism. Having grown up in a Christian family, she abandoned her life, friends, and photography job to devote herself to meditation after hearing a Buddhist master explain: “[F]or the benefit of all beings, we want to attain enlightenment.” (Medianet) 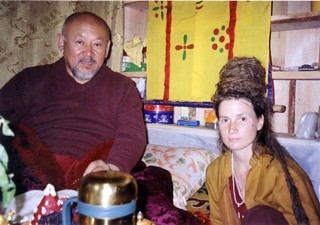 His Holiness Chetsang Rinpoche and Tara Choying
Lhamo. From vajrayana.com.au

The first eight years, she spent in a monastic community with her teacher in Nepal, after which she went on retreat in the high mountain caves of Nepal. These caves are so remote that it takes a six-day journey to reach civilization. She mentioned that  retreats are not considered a selfish pursuit in the Buddhist tradition. Instead it is a pursuit of a deeply “spiritual practice to get deeper into your consciousness,” which is “beautiful.” (Otago Daily Times)

Spending all those years in retreat might seem like a terrifying prospect to some, however Lhamo explained that it was manageable by viewing her negative thoughts as something to contemplate and not as something bad, following the principles of mindfulness. During the retreat she was able to “slowly dismantle feelings of jealousy, ego-clinging, attachment, and pride as the ‘habitual patterns’ and pressure of life disappeared.” (Otago Daily Times) Charles Potter, director of The Contemplary, a non-profit organization that promotes the practice of meditation and will host one of Lhamo’s talks in Australia, described her experience as a remarkable opportunity to understand the operation of the mind and its habitual patterns, in addition to showing us how to cultivate its deepest potential.

“It is rare to find someone who has left society for such an extended period to really explore contemplative practices that transform the mind,” Potter added. “The return of a contemplative from the wilderness is an important opportunity to refresh our understanding about how to live, what is truly important, and how we might unlock the mind to enhance our society.” (Medianet)

“Most of the problems faced by modern humanity stem from our drive to pursue happiness purely through material fulfilment, and a failure to cultivate inner qualities that are a source of lasting contentment and well-being. However, we are seeing a new science of virtue arising as researchers in new fields rediscover the links between generosity, patience, gratitude and kindness with happiness and better ways of engaging in the world. . . .  Not all of them involve sitting in a cave for 12 years.” (Medianet)