Asian White-backed Vulture on the Brink of Extinction, WWF Warns Tens of millions of white-backed vultures have vanished from South and Southeast Asia since the early 1990s. From hbw.com

Vulture Peak, in the Indian state of Bihar, which the Buddha is said to have favored for solitary retreats and is recorded as the site of many of his discourses, was so named for the numerous vultures that perched on its rocky outcrops. Today, the once-ubiquitous Asian white-backed vulture is facing the very real threat of extinction, according to the World Wildlife Fund (WWF), as a direct result of the widespread use of industrial pharmaceuticals in the breeding of the livestock that the vultures traditionally feed on.

According to the WWF, which is working to offer a lifeline to the alarmingly rare species, the population of white-backed vultures (Gyps bengalensis; sometimes known as the white-rumped vulture) in India, Nepal, and Pakistan has tumbled by 99 per cent since the 1990s. The species is now classified as Critically Endangered by the IUCN (International Union for Conservation of Nature) Red List.

“Once vultures were found in a very good number in Pakistan,” observed the coordinator for the WWF-backed Vulture Restoration Project, Warda Javed. (Pakistan Today)

Although some sources have suggested that the population decline may be attributable to an epidemic of avian malaria, the principal threat to the survival of the birds is widely believed to be diclofenac sodium, a non-steroidal anti-inflammatory drug (NSAID) commonly administered to livestock, as well as other drugs including ketoprofen and aceclofenac, all of which lead to kidney failure in the vultures. 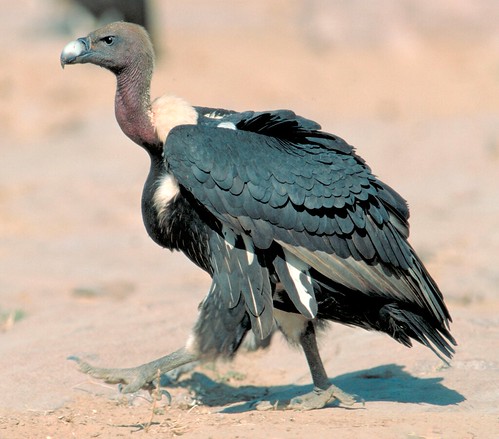 In the 1980s, the global population of Asian white-backed vultures, native to South and Southeast Asia, was estimated in the tens of millions and it was believed to be the most abundant large bird of prey in the world. Once frequently spotted in Bangladesh, Bhutan, India, Nepal, Pakistan, as well as Myanmar, Thailand, Laos, Cambodia, and southern Vietnam, estimates from last year put the global population at less than 10,000 mature birds.

The consequences of the vanishing vulture for human communities in South Asia are not insignificant. Animal carcasses that used to be consumed by vultures are now left to rot, leading to contaminated water supplies. The shrinking vulture population has also allowed other scavenging species, such as rats and wild dogs, to proliferate.

Extremely efficient scavengers—packs of vultures have been observed to clean an entire bullock carcass in about 20 minutes—possess the ability to digest meat in any almost stage of decay, and are able to safely consume rotting flesh containing anthrax, botulism, and cholera bacteria that would kill other animals. Meanwhile, scavengers that are flourishing in the absence of the vultures, such as rats and dogs, are becoming carriers of these same pathogens.

In India, the rapidly diminishing vulture numbers also have implications for the small Parsi Zoroastrians community, which traditionally relies on the birds to assist in their 3,000-year-old tradition of providing “sky burials” for the dead, in which corpses are consumed by the vultures on specially-built structures known as “towers of silence.”

In Pakistan, the WWF’s Vulture Restoration Project in Changa Manga, 80 kilometers outside Lahore, has taken a long-term strategy. Home to some 20 white-backed vultures, four chicks have been born through the center’s breeding program in the last two years, but it will be some years until they can consider releasing them into the wild.

“Up till 2020, we don’t have any release plans until we have a controlled environment outside this center as well,” explained Javed, adding that even if diclofenac is successfully banned in Pakistan, other drugs used in cattle rearing also impact the health of the birds. WWF-Pakistan’s Fatima Arif noted that the WWF is also trying to increase public sympathy for the vulture’s plight by attempting to overcoming the traditional aversion to the avian carrion feeders, which have long been linked with death. “We are trying to gather the general public to let them know that the myths that are generally associated with this species are not really based on any fact . . . they are just folklore,” she said. “Vultures are very shy birds, they are very caring parents.” (FirstPost.)