The Asian Buddhist Media Conclave, held under the theme “Mindful Communication for Conflict Avoidance and Sustainable Development,” was the first of its kind in India. From twitter.com

A conference on the relationship between the media and Buddhist principles, the first of its kind in India, was held from 27–28 August in New Delhi. Organized by the International Buddhist Confederation (IBC) and hosted by the Vivekananda International Foundation (VIF), the event was titled: “Asian Buddhist Media Conclave – Mindful Communication for Conflict Avoidance and Sustainable Development.”

Over the course of the two-day gathering, a series of speakers discussed not only the work of Buddhist media outlets, such as Buddhistdoor Global, but also how Buddhism-inspired journalism paradigms can be developed for Asian societies, particularly in the context of global crises and growing distrust of traditional media institutions and methodologies.

VIF director Arvind Gupta opened the conference by noting that in an age of globalization, rising inequality, and mass migration and refugee crises, the “Indic Buddhist civilization” could contribute to new organizing principles for media in the 21st century.

IBC general secretary Venerable Dhammapiya questioned some of the prevailing practices in commercial media, saying that journalists “should not always focus on darkness, but on lighting the candle that brings light.” He also offered a perspective on the term “sustainable development,” saying that many people thought of towering skyscrapers and high-speed railways. However, he observed, if human minds are not developed, but remain full of hatred, greed, and delusion, then the question of exactly what is being developed would remain in ethical doubt.

VIF vice chairman Shri S. Gurumurthy put forward a postcolonial vision of mass communication for Asian countries, noting that as the world is driven by context, an inclusive philosophical approach might be more pluralistic than adversarial, ideological journalism. Speakers discussed the development of Buddhism-inspired media paradigms for Asian societies. From twitter.com

The conference continued with various panels, with speakers ranging from journalists to media advisors. Kalinga Seneviratne, a prolific journalist in the postcolonial tradition, said that Buddhists needed to build strategic communication networks, initiate more ecumenical interaction to encourage unity and collaboration, and construct narratives to counter what he perceived as often negative, surface-level reporting of Buddhist crises such as the Rohingya displacements in Myanmar, or the Sinhalese-Tamil reconciliation process in Sri Lanka by mainstream media outlets.

From a practitioner’s perspective, Plum Village teacher Shantum Seth said that any Asian or Buddhist vision for media would need to put practice—specifically, meditation of the many Buddhist traditions—front and center in its methodology. This, he emphasized, was the unique strength of methodologies grounded in the philosophical traditions of India and, more broadly, Asia.

Dorji Wangchuk, a former media advisor to Bhutan’s royal family, said that in the “Middle Path Journalism” of Bhutan, the media ideally reflects the values of the society it serves, and as a public institution should work toward nation-building. He suggested that alternative media ideas needed to take into account the phenomenon of social media, as well as the decline of trust in mainstream media, with the accusation of fake news weighing on the minds of many attendees. Media, he proposed, should have the wisdom of “knowing enough” and minimize the selling of desire and dissatisfaction, balance individual rights with considerations of how the community might be affected by the release or withholding of a story, and compassion when covering stories that might have a “villain” or a “hero,” to neither over-vilify nor over-glorify either. 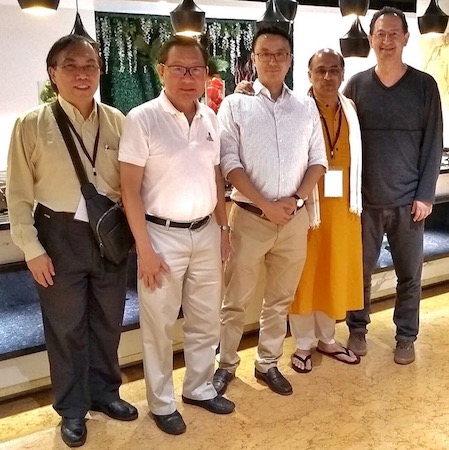 The conclave was exhaustive and inspiring, allowing media professionals and scholars to debate, discuss, and engage in dialogue about the intersection of Buddhism and journalism, both of which focus on the present moment in their own way. There are many ways to present a Buddhist methodology of journalism: from circumspection with a moral basis to recollection with compassion and wisdom. What all attendees agreed on was the need to build that long-awaited network of Buddhist media: in a deeper sense, a solid sangha of editors, reporters, social media influencers, and cultural professionals fit for Asian and global contexts.

Buddhist Journalism: Two Decades of a Fledgling Discipline
The Noble Reporter: Lessons about Right Speech and Media from “Roman Holiday”