Almost 1,000 years after it was lost in the mists of time, archaeologists in the western Chinese city of Chengdu have discovered an ancient Buddhist temple, in the process unearthing more than 1,500 sculptures and tablets inscribed with Buddhist scriptures.

Archaeologists have spent several months excavating the site in downtown Chengdu, capital of China’s Sichuan Province, revealing the remains of Fugan Temple, a once famous Buddhist site that flourished from the Eastern Jin dynasty (317–420) to the Southern Song dynasty (1127–1279).

“We have only excavated a part of the temple’s area, but already have a glimpse of its past glory,” said Yi Li, who is leading the excavation project. Li observed that in addition to unearthing the temple’s original foundations, the team of archaeologists have found the remains of surrounding buildings, wells, roads, and ditches, as well as more than 1,000 clay tablets inscribed with Buddhist scriptures, over 500 pieces of stone sculpture that include various Buddha and bodhisattva statues, and glazed tiles bearing inscriptions. (China.org.cn) The excavation site of Fugan Temple. Photo by Liu Kun. From ecns.cn Photo by Liu Kun. From ecns.cn

The eminent Tang dynasty (618–907) Buddhist monk and scholar Daoxuan (596–667) once recorded that a ceremony to pray for rain was held in front of the temple, resulting in a downpour that brought to an end a persistent drought. It was this event that led to the temple’s name, Fugan, which means “to perceive the blessing.” The renowned Tang dynasty poet and philosopher Liu Yuxi (772–842) wrote a poem to commemorate the temple’s renovation, describing its “heavenly appearance” and cultural significance. (Realm of History)

As work on the historic site continues, Li noted that archaeologists have so far excavated about 11,000 square meters, representing only a portion of the original complex. Fugan temple fell into ruin and disappeared amid repeated bouts of warfare during the Song dynasty. Ancient Buddhist stone carvings were discovered at the site. From news.cgtn.com 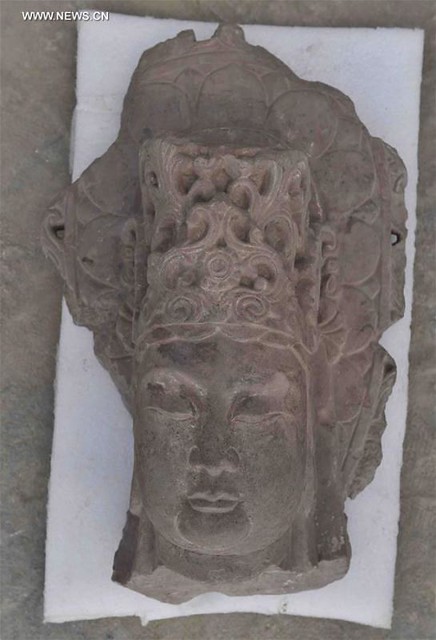 A stone bodhisattva head unearthed at the excavation site. Photo by
Liu Kun. From ecns.cn

Because Chengdu was a major economic and cultural centre during the Sui (581–618) and Tang dynasties, Chengdu Cultural Relic Research Institute director Wang Yi expressed confidence that the temple’s discovery would greatly contribute to the study of the history and spread of Buddhism in China.

Archaeological investigations of settlements in and around Chengdu, which received its name early in the 4th century BCE, indicate evidence of human habitation dating back more than 4,000 years. Modern chengdu is home to numerous historic Buddhist sites, including Wenshu Monastery, the site of which has a history dating back some 1,300 years, Baoguang Monastery, believed to have been first built during the Eastern Han period (25–220), and Chengdu Daci Monastery, first documented during the Tang Dynasty.

Lotus Tour of the Silk Road, 15–23 October 2016: Wuwei City Museum
The Making of Buddhist Wood Sculptures in China
An Illuminating Exhibition on the Transmission of Buddhist Art at the Palace Museum in Beijing