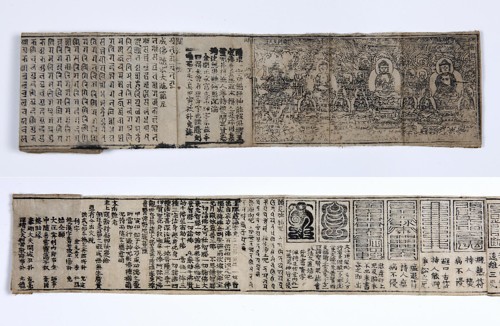 The pocket-sized manuscripts found inside the Amitabha Buddha statue. From
yonhapnews.co.kr

The Jogye Order of Korean Buddhism announced on Monday that 29 Buddhist manuscripts have been discovered inside a 15th century wooden statue of a seated Amitabha Buddha. The statue was part of the collection of Haein Temple in South Gyeongsang Province, South Korea.

Haein Temple, first built in 802, is the head temple of the Jogye Order of Korean Buddhism, a school of Seon (Zen) Buddhism and South Korea’s largest Buddhist tradition, which traces its roots back 1,200 years. The temple is well known for housing the Tripitaka Koreana, a collection of 81,350 wooden printing blocks carved in the 13th century that hold the complete collection of all the Buddhist scriptures. It is the oldest and most comprehensive version of the Buddhist canon in Hanja (Korean for Chinese characters) in the world.

The manuscripts found inside the wooden statue also date back to the 13th century, preceding the age of the wooden statue in which they were stored by more than a century. According to the publication record on one of the documents, they were written in 1375, during the first year of the reign of King U (or Woo) of Goryeo (r. 1374–88). 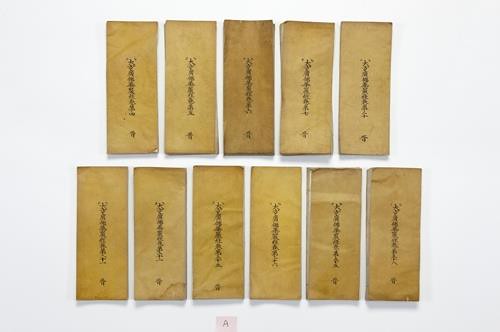 Twenty-eight of the 29 manuscripts contain the Daebanggwangbul Avatamsaka
Sutra. From yonhapnews.co.kr

Among the collection of 29 manuscripts was a pocket-sized version, small enough to be kept inside the sleeves of traditional monastic robes, that includes a detailed history of its publication and various drawings of the Buddha and other Buddhist scenes. A book of this size and age (from the Goryeo Dynasty (918–1392) has never been found before, making it a treasure in itself. The other 28 documents contain the Daebanggwangbul Avatamsaka Sutra, one of the most influential Mahayana sutras of East Asian Buddhism that explains that the Buddha and all other living beings reflect an interconnected matrix.

The scriptures were discovered when the statue was opened and inspected. The statue was previously partially opened in 1983 during restoration work, but the manuscripts were not discovered at that time.

Left to right: the statues of the bodhisattva Jijang, Amitabha Buddha, and the
boddhisattva Kannon. From yonhapnews.co.kr

The seated Amitabha Buddha is part of a set of three statues thought to have been ccommisioned for Haein Temple between 1490 and 1500. The other two statues, one of a standing Kannon Bodhisattva and the other of a standing Jijang Bodhisattva, were examined by X-ray to determine whether they also contained scriptures. The scan show that the Jijang statue contains a scroll with writing and metal decorations, while the Kannon statue holds a traditonal folded book (折帖本, a book that folds like a Chinese screen).

Respecting the wishes of Ven. Hyeam, who served as the head monk of the Jogye Order, and Ven. Wongak, a high-ranking monk at Haein Temple, the other two statues were kept intact as they had never been opened before during conservation or repainting efforts. Ven. Jeong-hyun, director of the Jogye Order's Department of Cultural Affairs, commented that the statues did not need to be opened as he had already confirmed their contents by X-ray analysis alone.

Lee Yong-yun, head of the Jogye Order's cultural assets management team, noted that the pocket-book could be designated as a National Cultural Asset. The Jogye Order has filed an application with the Cultural Heritage Administration to designate the findings (in their entirety) as items of national cultural heritage and said it will strengthen efforts to preserve the statues and the scriptures they contain. 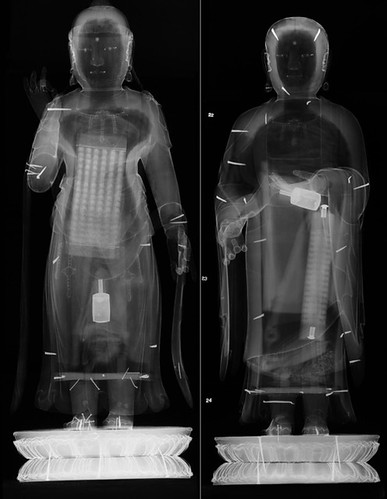 X-rays of the Kannon statue, left, and the Jijang, right. From
yonhapnews.co.kr

Seperately on Monday, the Cultural Heritage Administration also announced that researchers had found a 6th century gilt-bronze Buddhist triad at the ruins of Jinjeon Temple, in Yangyang County in northeastern Gangwon Province. The statue features three bodhisattvas, most prominently Avalokiteshvara in the center surrounded by a circle of light (mandorla), with a Nirmanakaya Buddha (Transformation Body Buddha) on the top of its crown. The statue is thought to originate from the Three Kingdoms (57 BCE–668 CE) and, since it is relatively well preserved, will probably be given the status of a National Treasure.* 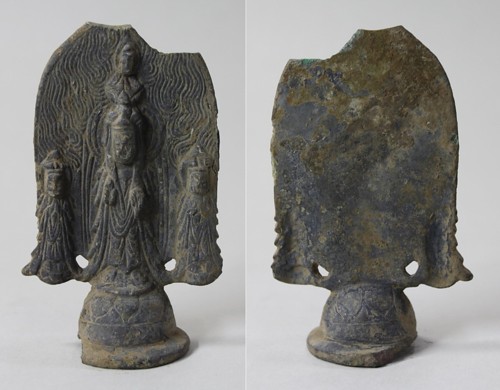 The 6th century gilt-bronze Buddhist triad found at the ruins of Jinjeon Temple.
From yonhapnews.co.kr

* A National Treasure is a site, artifact, or building recognized by the South Korean government as being of high cultural, historical, or artistic value to the country.