Dr. B. R. Ambedkar. From wikimedia.org

While India commemorated the life, work, and conversion to Buddhism of the celebrated scholar, activist, and social reformer Dr. Bhimrao Ramji Ambedkar (1891–1956) on 14 April, the 126th anniversary of his birth, the day held particular significance for one man—an aging Buddhist monk who is the only surviving member of the group of monastics who conducted the historic ceremony that would become a landmark in Indian Buddhist history.

Dr. Ambedkar inspired the modern Buddhist movement in India and was a vociferous campaigner against social discrimination. Having studied Buddhism for much of his life, he accepted the Three Jewels and Five Precepts by formally converting to Buddhism shortly before his death. Of the seven Buddhist monks who presided over the ceremony, Venerable Bhadanta Pragyanand is the only surviving member. Yet the mention of Dr. Ambedkar’s name brings a light to his eyes and gives him renewed vigor to share his memories of the renowned social crusader.

“The atmosphere was euphoric,” Pragyanand said, recalling the historic occasion on 14 October 1956 that he attended as a young monk. “Nearly [500,000] people had gathered to witness the spiritual conversion of ‘Babasaheb’ Bhimrao Ambedkar at Deekshabhoomi in Nagpur in October 1956. By this time, he had already retired from politics.” (The Tribune)

After completing his own conversion, along with his wife, Dr. Ambedkar then proceeded to convert some 500,000 of his Dalit supporters who had gathered there that day.

Popularly known as Babasaheb, Dr. Ambedkar was an Indian jurist, economist, and politician, and a prolific scholar and social reformer. He was one of the most educated Indians of his time, holding doctorates from the University of London and Columbia University. He became independent India's first law minister and was posthumously awarded the Bharat Ratna, India's highest civilian award. 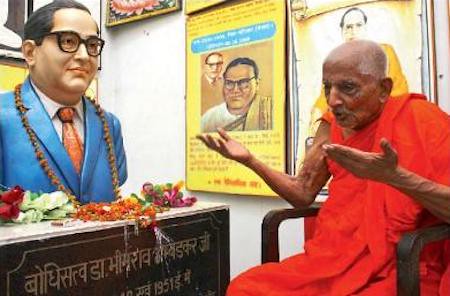 Pragyanand is the only surviving monk of seven who witnessed
Ambedkar's conversion. From timesofindia.com

As well as inspiring the modern Buddhist movement in India, he campaigned against social discrimination towards women and India’s “untouchable” Dalit caste. He was the principal architect of India’s first constitution and in 1955 founded the Buddhist society of India. Three days before his death on 6 December 1956, Dr. Ambedkar completed the transcript for his final book, The Buddha and His Dhamma, an English-language treatise on Buddhism and the Buddha’s life, which was published posthumously.

“I assisted Bhadant Chandramani Mahathero, who formally inducted Babasaheb Ambedkar into Buddhism. Ambedkar’s wife Savita was also present,” Pragyanand said, noting that Dr. Ambedkar was completely absorbed by the ceremony and appeared to have severed all connection with the outside world. (The Tribune)

Originally from Sri Lanka, Pragyanand, though now bed-ridden, is the most senior monk at Buddh Vihar, a temple in the northern Indian city of Lucknow that Dr. Ambedkar visited twice. Here Pragyanand is cared for by his disciples.

“For most of the time, he is confined to his bed, and communicates using sign language and pens his thoughts,” said fellow monastic Suman Ratan. “But, the mere mention of Babasaheb and Nagpur’s Deekshabhoomi [stupa marking the site of the conversion ceremony] gives him strength to speak his mind.” (The Tribune)

Dr. Ambedkar's speech on Buddha or Karl Marx at the Fourth Conference of the World
Fellowship of Buddhists in Kathmandu on 20 November 1956

Buddhists account for about 0.7 per cent of India’s population of more than 1.2 billion people, according to data from the 2011 Census of India, of whom more than 73 per cent live in the state of Maharashtra.