Chinese archaeologists say a submerged Buddha statue that was revealed during maintenance work at a reservoir in the eastern Chinese province of Jiangxi could prove to be more than 600 years old. The ancient Buddhist carving emerged late last year when renovation of a hydropower gate at Hongmen Reservoir near the city of Fuzhou caused the water level to drop by more than 10 meters.

Researchers leading an archaeological team that completed its underwater investigation of the site on Sunday, believe the 3.8-meter statue, which is carved into a cliff face, dates to the Ming dynasty (1368–1644). The archaeologists also discovered rectangular holes carved into the cliff and what appears to be the foundations for a 165-square-meter hall, suggesting that the statue once formed part of a temple compound. 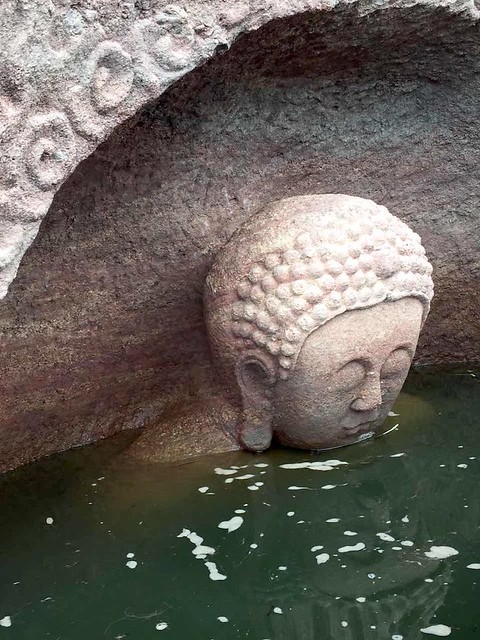 “A preliminary study of the statue suggests it was probably built during early Ming dynasty, maybe even earlier as the Yuan dynasty,” said Xu Changqing, director of Jiangxi Provincial Research Institute of Archaeology, adding, “If the statue wasn’t preserved in the water, it could have suffered weathering, oxidation, or other risks.” (CNN)

Hongmen Reservoir, also known as Zuixian Lake, was created in 1958. Spanning the counties of Nancheng and Lichuan, and holding up to 1.2 billion cubic meters of water, the area was once the site of the ancient township of Xiaoshi, a major water transport hub and trade center between the provinces of Jiangxi and Fujian. The archaeological mission was carried out in cooperation with the underwater cultural relic protection center of the State Administration of Cultural Heritage.

“The ruins of Xiaoshi town were not exposed by the lowered water levels, but the underwater team also explored the town,” said Jin Huilin, curator of the Museum of Nancheng County, observing that a the country lacked a government department dedicated to protecting cultural heritage at the time the reservoir was built. “There was also a lack of mature technology to protect cultural relics, and the statue could not be removed,” he added. (Xinhua)

News of the discovery has attracted curious local residents to the site. Huang Keping, 82, a former blacksmith, remembers the area before it was transformed into a hydropower project. “I went to the temple in 1952 and saw the Buddha statue for the first time. I remember the statue was gilded at that time,” he said, recalling that a small temple once stood at the base of the statue. Many of the villagers held Buddhist beliefs in those days, he added. (Xinhua)

The statue was built at the intersection of two rivers where boats were easily overturned by the rapid flow of watercourse, said Guan Zhiyong, head of Hongmen Township municipality: “According to folk tales, the ancient people built the statue to pray for safety.” (Xinhua) The researchers also discovered an inscription of 30 characters to the south of the statue, according to Li Bin, an archaeologist with the State Administration of Cultural Heritage. The team plans to carry out further research and to draw up measures to protect of the reservoir’s underwater relics.

“The water levels of the reservoir will rise when the spring flood arrives around March, and the head of the Buddha statue will be submerged again," said an official from the Nancheng County water authority. (Xinhua)